So let's dig into lazy loading once again! Previously, I had written an article Angular infinite scrolling using RxJs and NgRx, which explained the concept of loading more data on reaching the end-of page. But this time, the concept is wider, or more generic.

This time, I would like to reach a certain part of the viewport, and then load some data specific to that part, or maybe perform some tracking action. So I would observe a specific HTML selector and then do something when that selector comes into view. And that selector could be anywhere in the page, not just the end, something like this:

So of course, we go for the IntersectionObserver API. Almost all modern browsers now support it, so we should ideally have no problem for a modern website.

Let us once again break down the requirements, one by one.
1) We need a custom directive, which we can place on any HTML element.
2) This directive will accept a callback method as a parameter, so that the parent component consuming the directive can decide what to do once the child element comes into view.
3) Tracking should happen only once, so that every time the element comes into view (due to user scrolling up and down), the data should not be re-fetched. But this is my specific use-case, you may choose to do differently.
4) The observer should be disconnected when the element is destroyed.

Whenever we place a directive on an element, we get a reference to the consuming element. And to be honest, this is all we need.
Almost the entire logic happens in the constructor, since each directive placed on each element creates a new instance of the class. 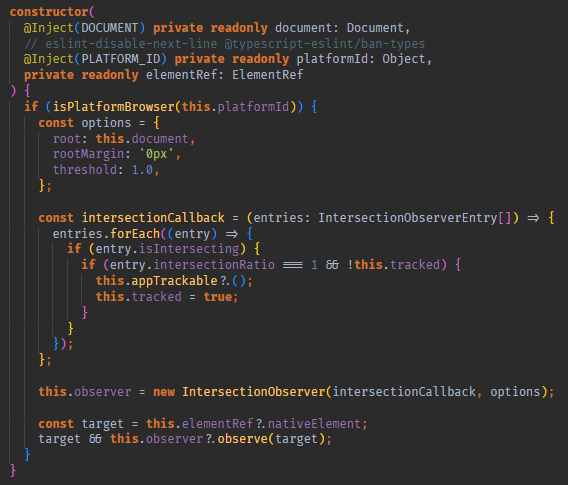 Let's understand what is being done:

root - this essentially means the relative component against which your component - the one you would like to observe - should intersect. For our use case, this is the entire document.
rootMargin - this would consider if the document has some margin, so that the intersection logic would consider that during its calculation.
threshold - this is a value between 0 and 1 (or consider 0 and 100%). A value of 1 means, the API would consider my component to be intersecting with the document only when 100% of the element is in view. You can change this as per your need.

The Intersection callback and The Observer:

For all components we observe, the callback is executed. For our use case, we have only one target - the element on which our directive is placed. We create a new instance of IntersectionObserver and assign it to an observer. This observer observes our component, which is injected into our directive class through elementRef: ElementRef.

So what happens next?

Depending on the threshold value, the entry.isIntersecting evaluates to true or false, and it is then that we need to do something.

And what do we do then?

Our directive takes in a callback as an input, and we fire this callback - this.appTrackable?.();

Also, I mentioned before that each directive on each element is a new instance. So we maintain a class level variable - tracked. And once the intersection logic is satisfied and the callback is fired, we do not need to fire the logic again and again. You could go one step ahead and disconnect the observer itself.

When the component gets destroyed, so does the directive, and you can tap onto the ngOnDestroy method, to disconnect the observer.

The implementation means placing the directive on an element and then passing a callback reference to it.

The callback methods include some logic to fire HTTP calls to fetch data for that element, but that is not what this article is about and so I will not go into its details. But you can always check it out from GitHub. Just remember to bind your callback to the service or class instance, as applicable.

So what are the possibilites?

Well you can do whatever you want with the callback thingy! But, I would say, tracking for analytics is one very important use case. You can also use this to execute infinite loading on scroll. Let me know in the comments if you can come up with more use cases!

GraphQL Armor: A middleware to make your GraphQL endpoints secure

Once suspended, anirbmuk will not be able to comment or publish posts until their suspension is removed.

Once unsuspended, anirbmuk will be able to comment and publish posts again.

Once unpublished, all posts by anirbmuk will become hidden and only accessible to themselves.

If anirbmuk is not suspended, they can still re-publish their posts from their dashboard.

Once unpublished, this post will become invisible to the public and only accessible to Anirban Mukherjee.

Thanks for keeping DEV Community safe. Here is what you can do to flag anirbmuk:

Unflagging anirbmuk will restore default visibility to their posts.