The acronym ARIA stands for Accessible Rich Internet Applications. The purpose of ARIA is to make web content more accessible for people with disabilities. ARIA can enhance accessibility in custom-designed user interface controls and components, but incorrect use of ARIA can hinder accessibility and create a worse experience than no ARIA at all. Standard, semantic HTML components don't need ARIA to be accessible. As the saying goes, no ARIA is better than bad ARIA.

Advanced use of ARIA is a specific discipline that should be encapsulated into custom UI components that are used to create a consistent experience across an application. Creating such a reusable component library is a common practice in Angular development. Angular ESLint has rules for checking ARIA, but Angular does not add this validation out of the box. This post walks you through how to add Angular ESLint to a component library project, then dives deeper into the ARIA rules. I'll cover what each rule looks for in the Angular template code and how it uses the underlying libraries to validate ARIA roles and attributes.

To generate a new Angular workspace run the ng new schematic without creating the default application:

Add Angular ESLint to the workspace with the ng add schematic:

The workspace will have both root and project level eslint configuration. The project .eslintrc.json files extend from the root level config, so rules and their options can be set at the global level and added or overridden at the project level. Configure the ARIA template rules under "*.html" overrides: 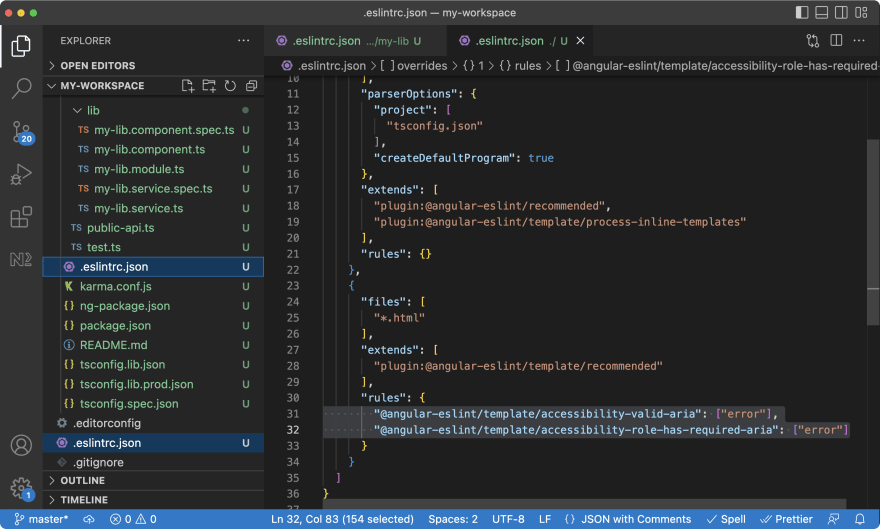 Next let's take a deeper look at the two ARIA rules from Angular ESLint that are configured in the .eslintrc.json above:

The Angular ESLint ARIA rules run against Angular template code both inline and in separate template files and identify incorrect usage of WAI-ARIA roles and their associated ARIA attributes. Ensuring WAI-ARIA criteria are met enables user agents and assistive technologies to gather information about and interact with web content and controls.

The accessibility-valid-aria rule checks aria-* attributes to be valid ARIA. The rule looks for HTML elements with bound or plain text ARIA attributes. Then it looks up the ARIA property definition from the aria-query library to get the ARIA attribute value type and allowed values.

If aria-query doesn’t have a definition for the matched ARIA attribute, the rule reports an invalid attribute value violation with the suggested fix to remove it: 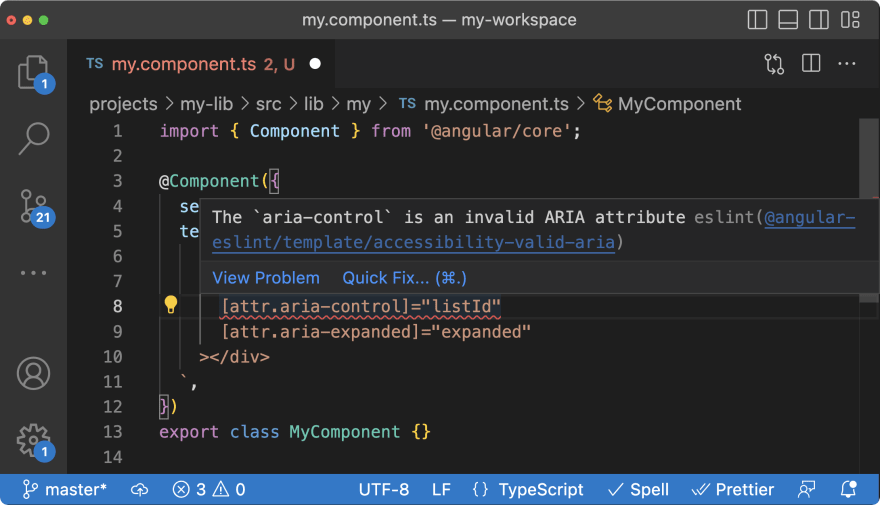 The template parser can only check the nodes and static values in the template itself, so a dynamically bound attribute value does not get flagged as a violation: 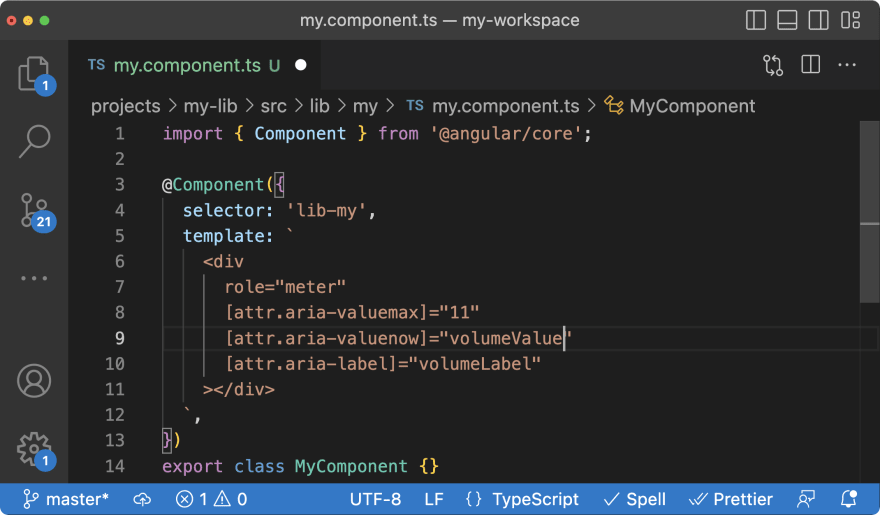 Note: You must be on at least version 14.2.0 of Angular ESLint to use the accessibility-role-has-required-aria rule.

This rule matches HTML elements with a plain text role attribute and checks that the given role has the required ARIA attributes using the role definition from the aria-query library. For example, the switch role definition has one required property, aria-checked.

Using role mappings from the axobject-query library, it determines if the HTML element's semantic role matches the given role. The role="switch" can be applied to an <input type="checkbox"/> and the required aria-checked property is covered by the element’s semantic role. A <span> element does not have those same semantic properties and would be flagged as a violation if given the role="switch" without aria-checked: 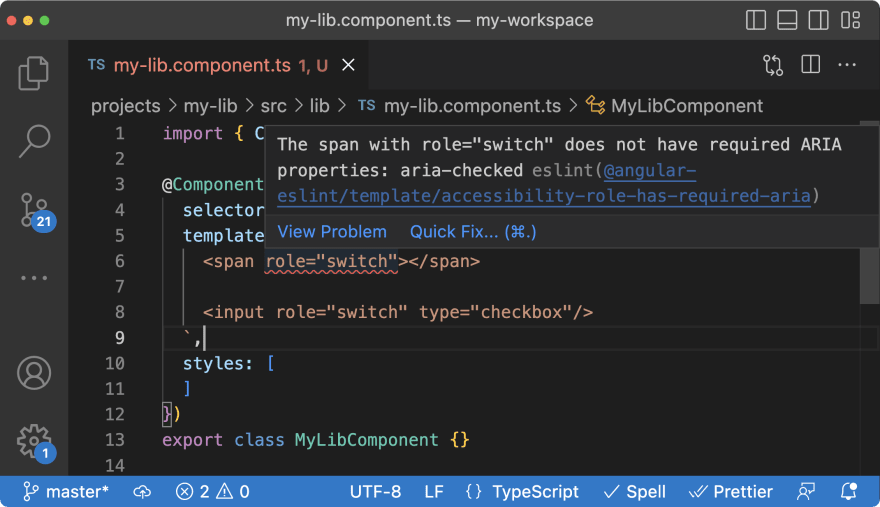 The complete set of roles with required ARIA properties covered by the accessibility-role-has-required-aria rule is as follows:

Enabling Angular ESLint's accessibility rules all at once in a codebase with existing accessibility issues can produce a long list of violations that might initially seem overwhelming and difficult to prioritize. Enable these sets of rules incrementally to tackle one category at a time:

But Wait, There's More? There Sure Could Be

The eslint-plugin-jsx-a11y library, where these Angular ESLint ARIA rules originate, has even more rules for validating ARIA that could be borrowed from and added to Angular ESLint. These rule additions could also leverage aria-query and axobject-query to validate ARIA usage and encourage better practices with semantic HTML.

Even More ARIA Rules in eslint-plugin-jsx-a11y

I would also like to implement these rules for Angular ESLint:

🎉 Shout out in the comments if you think having these rules in Angular ESLint would improve accessibility practices in your Angular codebase!

Once unpublished, this post will become invisible to the public and only accessible to Sandi Barr.

Thanks for keeping DEV Community 👩‍💻👨‍💻 safe. Here is what you can do to flag angular:

Unflagging angular will restore default visibility to their posts.