Take a look at a new 2000s-inspired component library. You’ll learn what a2k is, how it’s been built, and how to use it to build retro applications in React, Vue, vanilla, or your favourite frontend framework.

a2k is a web component library designed to evoke memories of the early 2000s era of computing. 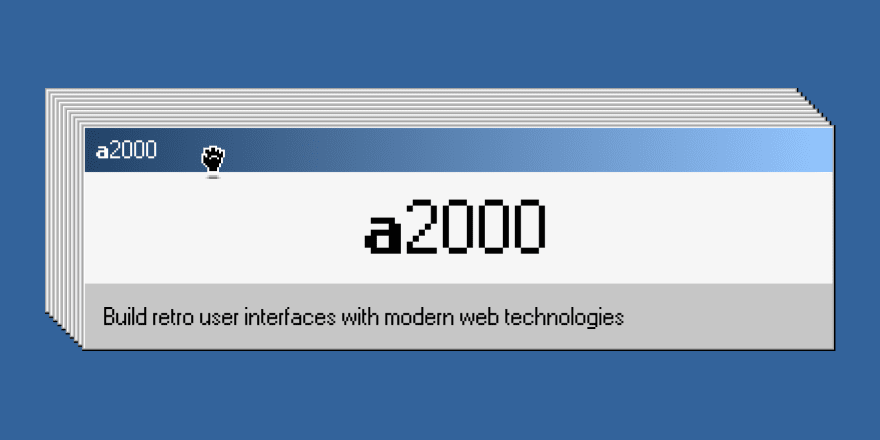 Why does a2k exist?

To embrace the browser platform

Over the years, the browser has introduced several mechanisms to allow developers to create reusable custom components. These are known as web components. Web components are a native way of reusing custom markup across several places in a codebase, or different codebases entirely.

Web components make it easy to author components for others to use in their own projects. As a consumer, it requires little more than to import a component and then use it like an HTML element.

This makes it a great tool for building a2k.

There is a catch when it comes to writing components using frameworks. Libraries written in React can’t be used in Vue projects and vice versa. In fact, component libraries written in Vue 2 aren’t necessarily compatible with Vue 3. Building a2k using web components means that we have an interoperable way of building retro user interfaces that won’t be obsolete by the next cycle of frontend tooling

To put the fun back in uhh.. fruntend (😅) development

a2k is designed to evoke a feeling of nostalgia and to help others form the foundations of their own retro web applications. For me, this alone is a motivating enough reason to pursue a project.

How does a2k work?

Like with many UI libraries, a2k is comprised of a base stylesheet and a suite of fully-functional components

This CSS file has a bunch of jobs. First off, it sets the base styles, like the default font family, loading cursor assets, setting the default element appearances, etc.

The file also defines some utility classes. For common styles that don’t need to be entire components, we can create utilities that we can reuse across our entire application.

Finally, the CSS file also creates the variables which we can use throughout our entire site. It also defines the variables for individual components. The file also applies the default values for these variables, which can be overridden by the user.

a2k exports a growing number of different web components. Many of these components can be categorised based on complexity or expected usage.

These are components with no built-in interactivity but are used to help build component/application layouts. One example is the a2k-panel, which is a box that applies some retro styling. It can be used alone, but it’s also used to build more complex components, like the a2k-window.

These are the common UI patterns, like buttons, select menus, and progress bars. You can use these components any place you’d use the native counterpart with the same behaviour but with the added benefit of cool retro UI.

These are complex components that are built on top of other layout or behavioural components.

The a2k-taskbar is one such example. The taskbar is a complex UI pattern that’s built using a mix of HTML, a2k-button, a2k-icon, and a2k-panel.

These components are highly specialised and you will likely not need to use them frequently. They might be used to build desktop-inspired UIs. You can even build your composite components using the building blocks that a2k provides.

Getting started with a2k

Because a2k is built using web components, it’s easy to integrate with different frameworks, like Vue and React.

I’ve provided some handy guides below to get a2k up and running using different frameworks; vanilla JS, Vue, and React.

To begin, we’ll need to do a little repo setup. We’ll be using Web Dev Server, which we’ll use to run a local development server. This will allow us to easily use the node modules we install via npm.

We’ll also use Lit, which is a simple library to help build web components. While we won’t use this library directly, a2k uses it under the hood so we need to ensure that it’s available.

Start by initialising your project using:

You can now install the necessary node modules:

In the root of your project, create an index.html file with the following contents:

Lastly, kick off your development server with the following script:

Open up your site at localhost:8000 and you should be greeted with some unstyled HTML. This is completely expected as we haven’t linked up the a2k styles yet. We also haven’t registered our web components either, so the browser will display the fallback content. In this case, the contents are the three option elements.

Inside the head element add the following HTML tag:

If you jump back to localhost:8000, you can see that the font family and the sizes of the HTML have changed, which shows that the stylesheet is being imported properly.

The final step is to register our web component. We do this by simply calling importing the script that a2k uses to register the select component. At the bottom of your body element, paste the following:

Jump back to localhost:8000, and you should see a fully functioning select component.

The a2k web components are working in your basic HTML file. Try and experiment with some of the other components laid out in the documentation. If you come up with anything cool, please share it with me on Twitter or Mastodon.

Because Vue scores a perfect score in the Custom Elements tests, integrating web components in your Vue project should be a breeze. Let’s see how we can do this with a2k.

In a new directory, run the following script:

The terminal will prompt you with a few options but for the sake of this tutorial, you can choose no for all of them.

Move into the directory and install all the necessary dependencies:

Once that’s done, you can kick off your dev server with the following

Begin by updating your App.vue so that it looks like the following:

If you open up localhost:5173 in your browser, you should see an empty page. Let’s go ahead and add some web components.

First off, add the following to your index.html's head component:

Update your App.vue file to import and render the a2k select component:

Jump back to localhost:5173 and you should see the select menu in the browser. That’s it!

Sadly, React’s support for custom elements isn’t as comprehensive as Vue’s, so we’ll have to do a little extra work to get this working.

Let’s create a react project by running the following in your terminal:

The packages we’re installing are pretty much the same as earlier, but with an additional package, @lit-labs/react. This is a handy package by the Lit team to integrate web components with React.

Clean out your App.js file so it looks like the following:

Your localhost:3000 should be empty at this point.

Go ahead and create a new file in your src directory called SelectComponent.js with the following contents:

Without getting too much into the weeds, I’m simply following the documentation for the createComponent API. I am however importing twice from @a2000/select twice. Once to access the A2kSelect component class itself, the second to register the custom element to the window. In the future, I’ll look to simplify this process.

This file exports a component which is a wrapper around the web component. The wrapper ensures that any props and events are handled correctly as they’re passed through to the custom element.

Next, let’s import our styles and use our component. Clear out App.js and replace it with the following:

For the most part, the markup looks very similar to the vanilla and Vue examples, so everything should look familiar to you. Jump back into your browser and have a little play with the components. Everything should be working as expected.

How can I support a2k?

a2k is still a work in progress, so any feedback is welcome. If you run into any problems while following the set-up guides, please open a GitHub issue.

Other ways you can support the library is by using a2k in your own projects and requesting the changes and features you’d like to see.

Finally, if you enjoyed the article and want to show a little support. You can simply give a2k a star on GitHub.

I’d also like to use a2k as a springboard for any cool and interesting ideas that I have. I’m also happy for others in the web community to contribute with some great ideas too.

Thanks for reading, and I hope that you have a lot of fun using a2k in your own projects.

Andrico
Hey, I'm @andricokaroulla, Frontend Developer based in London. I'm a Musician and Tech fan so chat geek with me on Twitter!
Create a Borderlands-style skill tree in 5 minutes
#react #typescript #javascript

Once suspended, andrico1234 will not be able to comment or publish posts until their suspension is removed.

Once unsuspended, andrico1234 will be able to comment and publish posts again.

Once unpublished, all posts by andrico1234 will become hidden and only accessible to themselves.

If andrico1234 is not suspended, they can still re-publish their posts from their dashboard.

Once unpublished, this post will become invisible to the public and only accessible to Andrico.

Thanks for keeping DEV Community 👩‍💻👨‍💻 safe. Here is what you can do to flag andrico1234:

Unflagging andrico1234 will restore default visibility to their posts.