As nowadays many complex web-applications run on production containerized, we keep developing them in 'old-school' way, installing the Postgresql, Redis, Ruby and other components on the local development machine.

In this article, I am going to review the local development containerization with the example of the Amplifr, the project I work on. With the help of docker-compose and docker networks, it's easy and efficient.

As all the infrastructure are containerized, and are managed with Kubernetes on production, we will attend the setting up local development only, following the one principle - the convenience of the development process.

Benefits of the local containerization

However Amplifr's backend is running on Rails, the project also has the complicated frontend, serving by the standalone Node.js server and the Logux web-socket server, and other helper-services, written on Node.js, Ruby, and Golang.

The following picture shows the simplified architecture of the project: 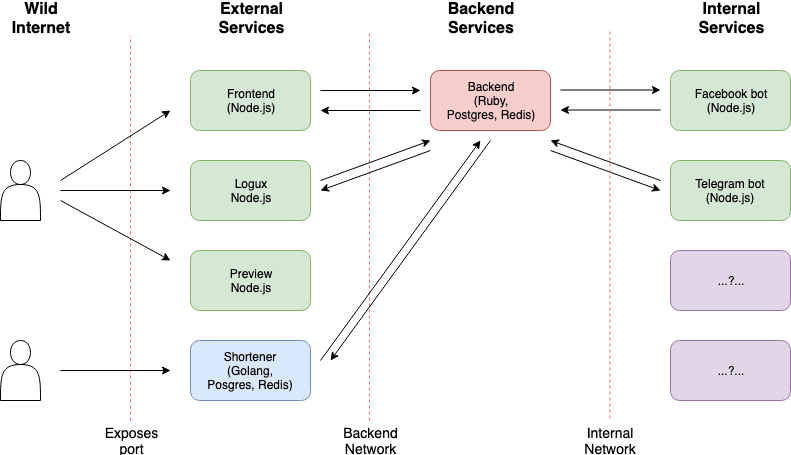 I am going to quickly review some components of the overall system.

The backend is the classic Rails-application, doing all the business logic and performing many background jobs with Sidekiq.

The frontend is the only public HTTP entry-point for the overall application. It serves the frontend assets and proxies other requests to the Rails backend.
The backend is also integrated back with frontend server for sharing some data, like browsers.json file for proper rendering of HTML.

The Logux is the server exposing the web-socket port, holding the bidirectional connection with the client's browsers. To perform the business logic, it has two ways of HTTP integration with the backend. It allows us to keep all the business logic in Rails-backend, and sending back the notifications from backend by hitting Logux with HTTP.

The link shortener is the specific web-service, written with Golang. It aims for shortening a link, expanding them and manages the overall statistics about link expansions.

The preview is the public service, used from the client browsers to render the OpenGraph representation of any link. It has public http endpoint only.

Shortener - is the standalone service for shorting the url and keeping analytics data about link expansion. It is written with Golang. It has the external public endpoint to expand the shorted links, and internal endpoint to short the links while publication social content within backend's background jobs.

And some other internal services, such as telegram and facebook bot, which have the backend only integrations.

Most of the components are by itself the complex web-services, depending on underlying components, such as Postgres, Redis, and other services low-level system services.

💡We will containerize each service separately with the Docker Compose. It is a tool for defining and running multi-container Docker applications, making it easy to start just by running up all the services together with only one command:

💡To make the services to integrate we will use the docker networks, that allows any docker containers to communicate with each other. We will use only one internal docker network for all the components for simplicity. Being more accurate a reader will be able to set up the individual network for every service dependents and for every group of the connectivity.

Here we have the standard stack: Postgres, Redis, Rails web-server and the Sidekiq background. For all of them, we'll define the services in docker-compose.yaml.

Here are the key points:

❗Keep in mind, that this configuration differs from the way of building docker image for production, where all the source code and all the dependency bundles are copied inside the docker image, to let it be all-sufficient and not to have external dependencies!

Here is the full gist with all the config, but let me pay attention to the main points:

Describe the base-service to inherit from it

The base service's container will be build from the Dockerfile.dev with the arguments - the Postgres version. All other Ruby based images will inherit the base. Here is the service inheritance diagram:

We also define the mapping of the current folder to the container's /app directory and mount the docker volume for the bundles. It prevents every time dependencies installation.

We also define two groups of the environments variables:
1) system variables, such as BUNDLE_PATH, REDIS_URL and DATABASE_URL URLs.
2) dependent services internal url for integration:
FRONTEND_URL - is the internal endpoint of the frontend server to get the supported browserslist.
LOGUX_URL - is the internal Logux HTTP endpoint for sending action from Rails-app to Logux.

The runner service is for running maintaining commands, such as rake tasks, or generators in Rails-environment. It is console-oriented service, so we have to go set up stdin_open and tty options, which corresponds to the -i and --t option of docker and enable bash shell for the container start:

We can use it in this way:

Easy, it just runs the sidekiq and inherits the base service:

The main point here is that we mount the volumes for the container's paths, where the data is stored. It persists the data between runs.

We would not dive deep into writing the Dockefile. You can find it here. Just notice, that it inherites from the standard ruby image, some required components such as Postgresql client and some other binaries to build the bundle.

The usage is quite easy:

Docker Compose also allows to specify the service dependencies and get the dependent service up if it is needed for the running service, g.e. Sidekiq requires the Redis and Postgres services to work correctly, that is why we define them in the depends_on section of the service.

And here is the service dependency diagram, showing how the services run: 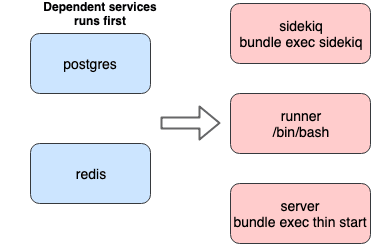 We've got the Rails-application running locally for the development. It works the same way as the local: persists the database, runs the rake task. Also the commands like rails db, rails c works well within a container.

The main advantage is that we can change the Postgres version or the Ruby version easily by changing one line, then rebuild image and try to run with the new environment.

The primary key points here are:

The frontend server is now easy to start, by running:

But it needs the backend to start first because frontend service refers to the internal network, which gets up while starting up the backend.

In any simple case, Logux server has any databases dependencies and could be configured the same way as frontend. The only one difference, that Logux service has its environment variables, to set up the interaction with integrated services.

The main idea is also the same:

Our web-service has the Postgres and Redis dependencies. Lets start describing from the Dockerfile, overall config sample can be found here:

Here are a couple of interesting details:

‼️ The most of those tool we do not need for the production environment docker image, because it will contain only compiled binary.

We will use the same way of dockerizing to Golang service, as the Ruby service:

Here are the significant parts of the docker-compose.yml file:

Docker-compose is the powerful tool to simplify the managing of the complex services.
Let me review the main principles for local development dockerization in context of using docker compose:

That's it. Thanks for reading!

Interview Question - How to create a text side by side output in node.js (as a diff). From Vanhack