We start this series by building and debugging a .NET 6 Web API application in Docker containers. Many developers still avoid using Docker for development and debugging purposes, so I hope this will somehow reduce the gap of the unexplored. This is the first part, so come back later to check others where we add PostgreSQL with persistence, log to Elasticsearch, explore and visualize with Kibana to the existing setup, and much more.

This part of the tutorial will cover .NET 6, but the whole idea of containerized services is that we are not limited to just a particular technology. Instead of .NET, maybe you prefer writing applications in NodeJS or Python (in later examples), or you want to combine all these technologies, containers allow us to do so with the least effort.

What you will learn

After this series, you should be able to understand the significance of containerization with Docker and apply new knowledge to your projects. Also, I will try to keep up with best practices as much as possible so you can produce better software.

Before we can even support this kind of story, we need to ensure that our machine and operating system keep the minimum requirements for the Docker engine.
A couple of things need to be installed on your machine before we start with this process:

You can find the source code on GitHub. Every part of this series will have a separate branch, and all of them will be merged into the master branch.

Docker is a containerization technology for packaging your program and its dependencies into containers, ensuring that your application runs smoothly in any environment, including development, test, and production. Docker is a program that makes it easier to construct, deploy, and run containerized applications. With Docker in mind, the code running on your machine will function the same on every other machine.

Create a directory where we will hold everything related to our project.

Create a .NET 6 Web API application using .NET CLI in the terminal (if you use Visual Studio, you can create a new project from the template).

CLI will generate a sample boilerplate that we will use in this example. The project is ready to run, so for validation, run dotnet run from the src/sample-app folder (where we created our .NET 6 project).

The output will look like the image below, and it will show on which ports your application is available.

We can access the endpoint on the presented URL (mine is on localhost, port 5130), http://localhost:5130/WeatherForecast will get the sample response.

At the start, we created a new folder, blog-series (maybe you named it differently), where we keep all our independent projects. Open it in Visual Studio Code.
You will be prompted to add build and debug assets for C# - choose Yes and VS Code will create another folder .vscode in which debugging and task configurations are stored. 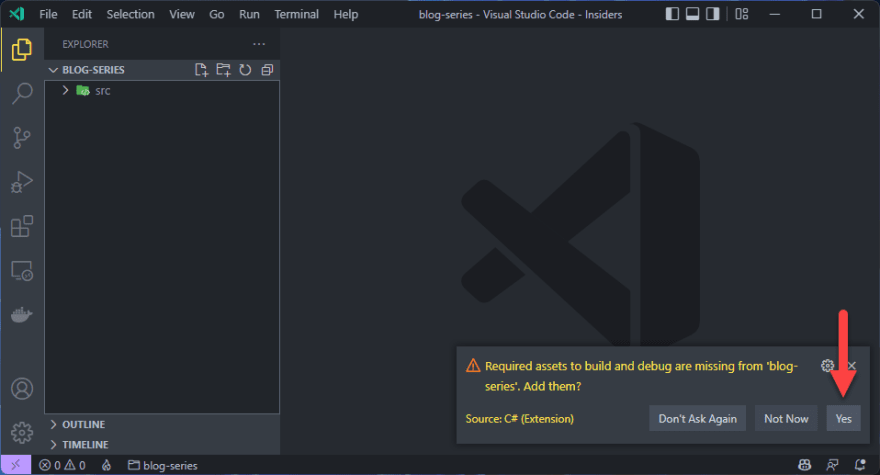 If you are not prompted to generate build and debug assets, you can do it manually through the Command Palette (Ctrl+Shift+P) and run the .NET: Generate Assets for Build and Debug command.

Be sure to have the Docker extension installed so that we can use extension goodies. We could create our own, but we won't bother since this is a more convenient method. 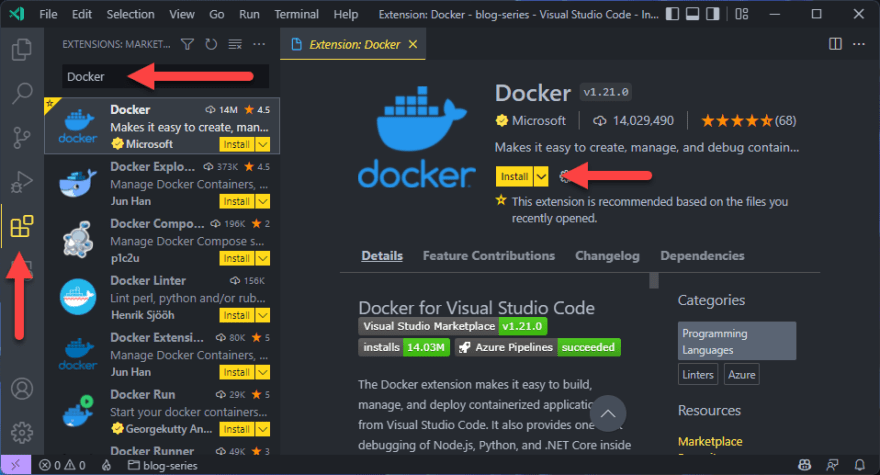 This extension will expand VS Code Command Palette with additional options. Press Ctrl+Shift+P to open the Command Palette and search for Docker: Add Docker Files to Workspace... (start typing). 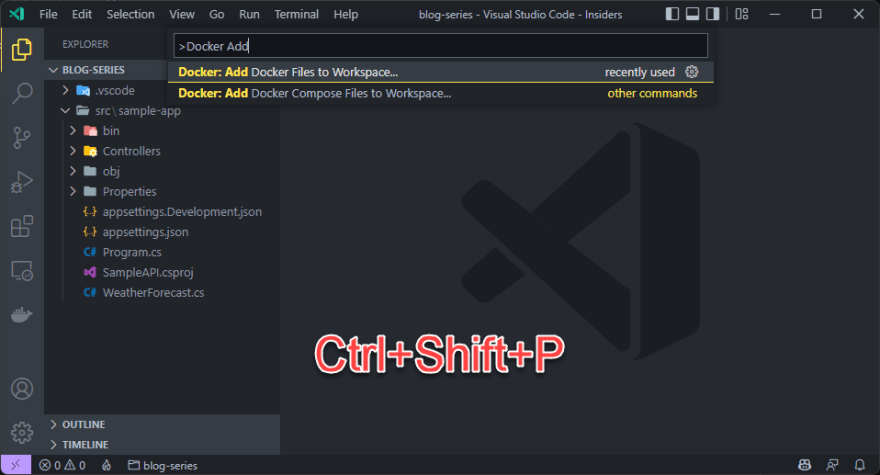 You will be prompted with different options, including:

The extension will create a couple of files and configurations:

The previous step created a Dockerfile, a text document that contains all the commands to assemble an image in our src/sample-app folder. Visual Studio Code extension did a good job, but I added a comment above each step to better understand what happened.

If you are interested in more Docker references, please check the official documentation.

Visual Studio Code Docker extension created a .dockerignore file which contains files and directories patterns to be excluded from the build context. This helps avoid unnecessarily sending large or sensitive files and directories to the daemon and potentially adding them to images using ADD or COPY.

Our project needs to run multiple containers, and while we can do that separately, we want to have them configured in one place. That is the perfect place to introduce docker-compose. Even in scenarios where we use a single container, using Docker Compose provides a tool-independent configuration in a way that a single Dockerfile does not. Configuration settings such as volume mounts for the container, port mappings, and environment variables can be declared in the docker-compose YML files.

The Compose file is a YAML file defining services, networks, and volumes. Docker-compose and Docker-compose.debug are pretty much the same, with a slightly different setup for the debug configuration (i.e., setting the Development environment and attaching a debugger from the host machine).

We have everything in place to spin up our application in Docker. We can do it in two ways using the command line or the Visual Studio Code Command Palette.

From the root folder, run the following command.

Wait for the process to complete: 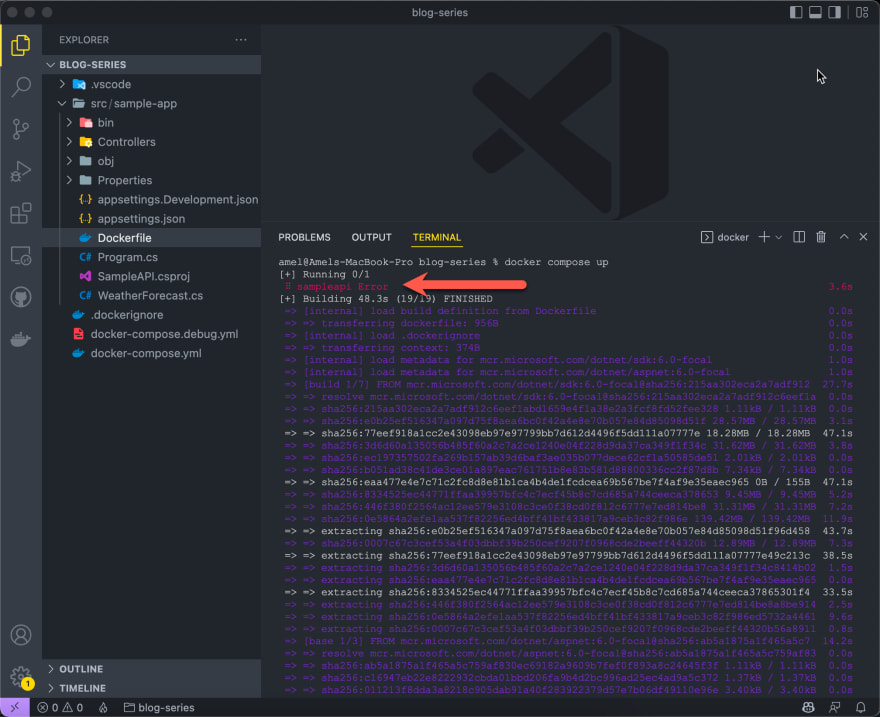 After the Docker extension installation, we have additional options in the Command Palette (Ctrl+Shift+P). Pick which docker-compose file you want to run. 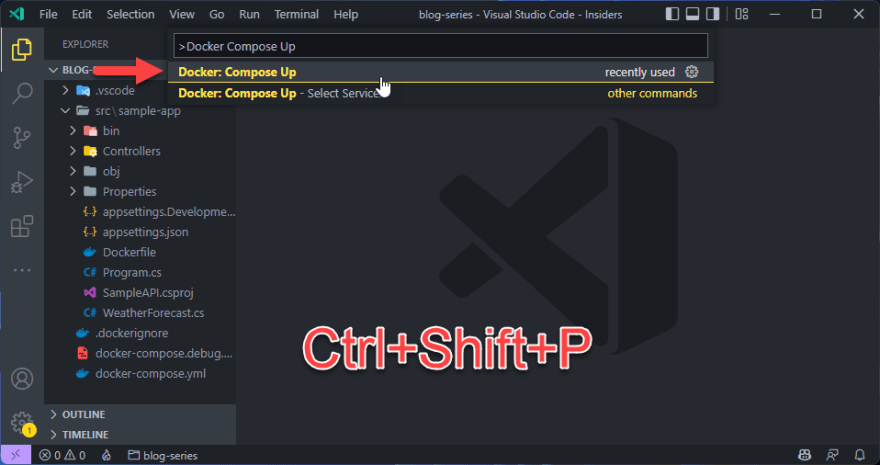 Another way is to right-click on docker-compose.yml or docker-compose.debug.yml and select Compose Up to reproduce the same behavior as the command-line execution. 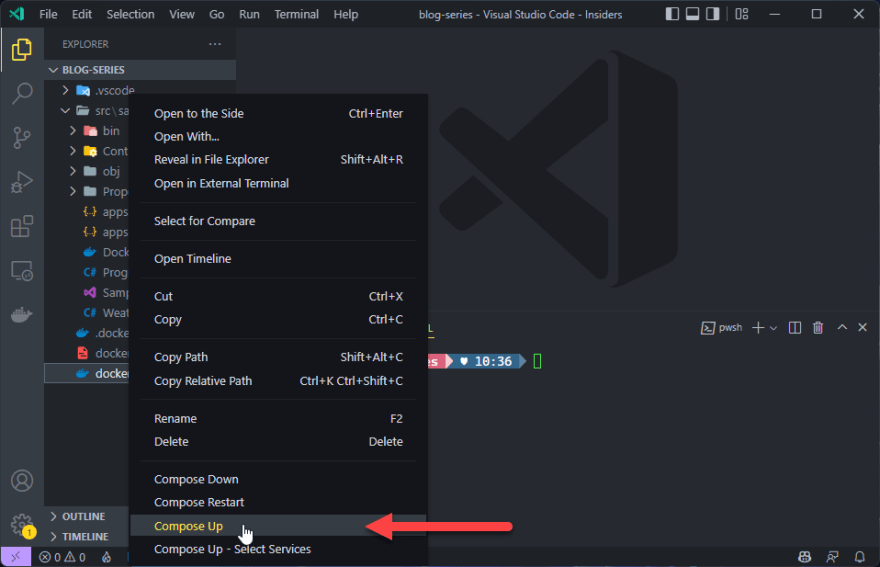 Running the commands above will create an image with a sampleapi tag (image name from the docker-compose.yml), (re)create, start, and attach to a service container. You can run docker image ls to check if the image is successfully created. It will list the images we have on our machine. Also, docker ps will show running containers.

Our application should be up and running. We can access it on the port configured in the docker-compose file (in my case, 5000).

If you came this far, you probably know how to use standard debugging techniques. Just act as if it is a typical application without container support.

We are skipping the part of standard debugging techniques and jump straight to Docker debugging. This one is more interesting as it brings you closer to the real-world container behavior.

When changing your code, right-click on the docker-compose*.yml file, choose Compose Restart, and reattach the debugger. 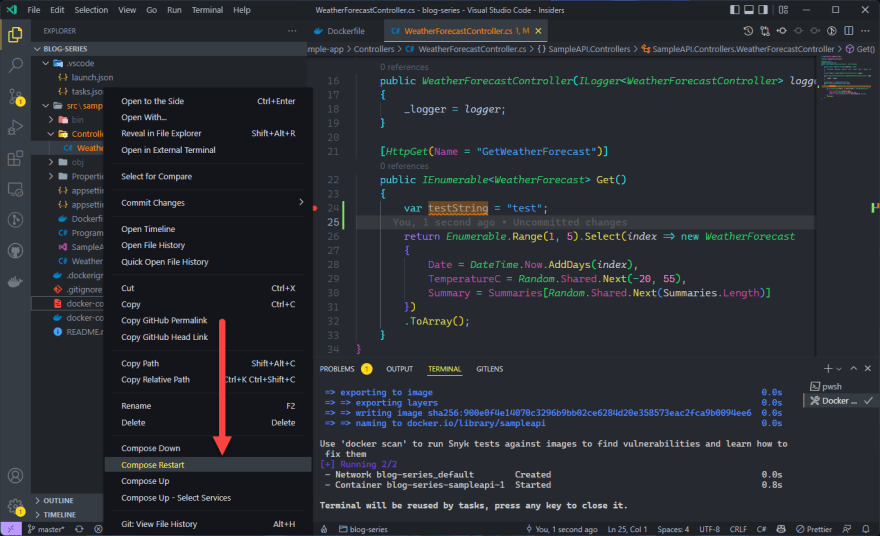 In the next part, we will add database support to our project in the containerized environment. We will focus on PostgreSQL, but a similar approach can be used for many other database systems (the main difference is in the code implementation).

Once suspended, amelspahic will not be able to comment or publish posts until their suspension is removed.

Once unsuspended, amelspahic will be able to comment and publish posts again.

Once unpublished, all posts by amelspahic will become hidden and only accessible to themselves.

If amelspahic is not suspended, they can still re-publish their posts from their dashboard.