Let's start dipping our toes in the code now by creating some routes and controllers.

For anyone unaware of the term routing. In terms of web development, it is a mapping of URLs and their handlers that you want your app to handle. URLs outside of this mapping will result in a 404.

Routes in AdonisJS are defined inside the start/routes.ts file. Using this file is a convention and not a technical limitation. Let's open the file and replace its contents with the following code snippet.

Let's give this code a try by visiting the URLs for the registered routes.

You can return most of the Javascript data types from the route handler and AdonisJS will properly serialize them for you.

Every route handler receives an instance of the HTTP context as the first parameter. The context holds all the information related to the current request, along with the response object to customize the HTTP response.

Following is the output of the ctx.inspect(). 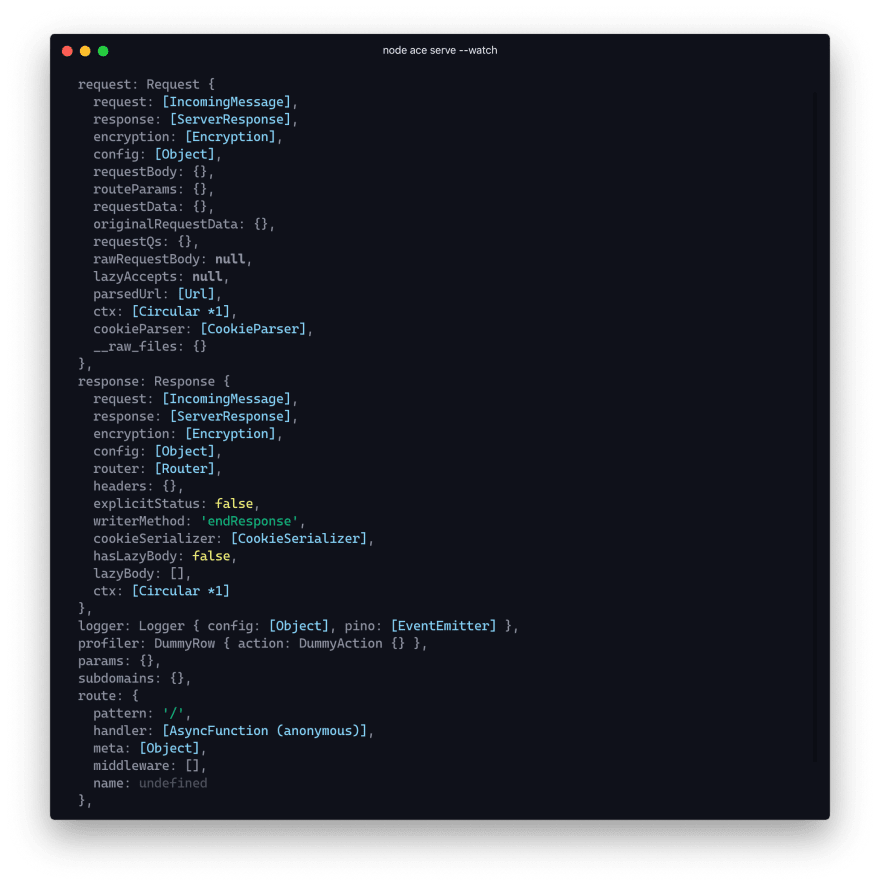 If you are coming from a framework like express, then there is no req and res objects in AdonisJS. Instead you have access to ctx.request and ctx.response.

Also note that the API of request and response is not compatible with express and neither it is a goal for us.

The HTTP context has an extendible API and many AdonisJS packages add their properties to the context. For example: If you install the @adonisjs/auth module, it will add the ctx.auth property.

Controllers in AdonisJS are vanilla ES6 classes stored inside the app/Controllers/Http directory. You can create a new controller by running the following ace command.

Let's open the newly created file and replace its contents with the following code snippet.

Visit the http://localhost:3333/todos URL and you will surely see the return value from the controller method.

Now, imagine an app with 40-50 controllers. Every controller will also have its own set of imports, making the routes file a choke point.

Lazy loading is the perfect solution to the above problem. Instead of importing all the controllers at the top level, we can lazily import them within the route's handler.

Now, the TodosController is only loaded when the request for the /todos route comes in. Since the import/require statements are cached in Node.js, you don't have to worry about reading the same file multiple times from the disk.

Are are you happy with the above code?
I am personally not. There is too much boilerplate and you would expect a framework to do a better job here and cleanup things for you and AdonisJS does that.

Replace the previously written route with the following code snippet.

This is the recommended way of referencing controllers within your routes file.

What about the type safety?
The verbose implementation has the extra benefit of being type safe. This is something missing when using the string based expression. Or I will say, it is missing for now.

We need two things to achieve type safety when referencing controller.method as a string expression.

To summarize, we bet in the future of Typescript and decided to remove all the extra boilerplate required to reference controllers within the routes file and expose a simple to use API.

Alright, let's wrap up this post. In the next post, we will begin designing the web page for our todo app.

Meanwhile, lemme share some code examples for commonly required tasks that you may perform when creating a web app.

Stream files from the disk

Do you use PNPM? If yes why?

Once suspended, amanvirk1 will not be able to comment or publish posts until their suspension is removed.

Once unsuspended, amanvirk1 will be able to comment and publish posts again.

Once unpublished, all posts by amanvirk1 will become hidden and only accessible to themselves.

If amanvirk1 is not suspended, they can still re-publish their posts from their dashboard.

Once unpublished, this post will become invisible to the public and only accessible to Aman Virk.

Thanks for keeping DEV Community safe. Here is what you can do to flag amanvirk1:

Unflagging amanvirk1 will restore default visibility to their posts.