A test report dashboard is an organized summary of results. It is created and used to help stakeholders (product managers, analysts, testing teams, and developers) understand product quality and decide whether a product, feature or defect resolution is on track for release.

I used MongoDB because its flexible schema makes it easy to evolve and store data. React and Express.js for building the web application and API.

So, the different testing frameworks would make the REST API call with the test results in JSON format to our application as soon as the test execution is completed.

Our App which will be running on a server would store this data and display it to all the stakeholders in real-time.

You can clone my code repository for GitHub for your reference : Link

Prerequisite:
You need Docker installed on your machine.

You need mongo and mongo-express. So, create a docker-compose.yml file, add the below content.

You should be able to access it on localhost port- 8081.
Go ahead and create the database and name it DashboardApp

Prerequisite:
You need Node installed on your machine.

We will install these dependencies for our backend.
npm install express cors mongoose dotenv

Create the server.js file to connect to the database and the .env file to store the environment variables.

Now let's create the database schema. Create a new directory called models.
Add all the different schemas you want to create in the model.js files.
Once this is done, we need to add the API endpoints routes to perform the CRUD operations.
Inside the backend folder, create another folder called routes and the CRUD operations code in it.

You can test the server by making an API call. 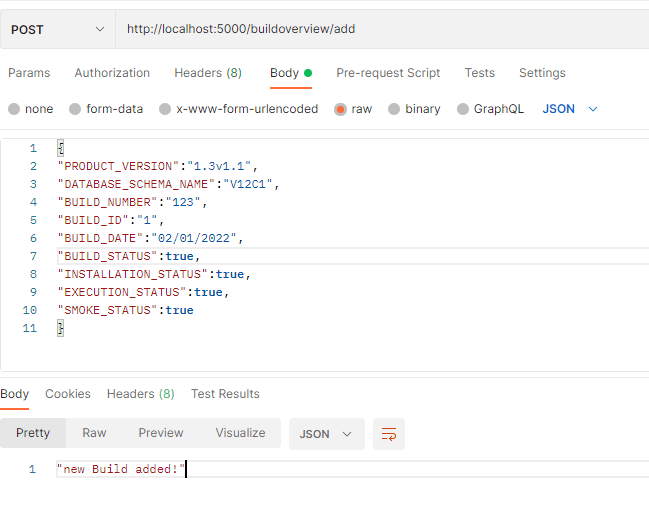 You need to edit the default template provided by React in index.html, index.js, and in App.js files

You use components to tell what we want to see on the screen.
So, create a folder called components inside the src folder.
Create the components files or projects as per your project needs.

Once, this is done you can start the Dashboard by running the npm start command.
The App should start running at localhost port- 3000.

Added some more data into the database and the Dashboard UI should look something like this.

Now, let's Dockerize our Dashboard application. So, it will be easy to start our app or run on only server easily.

We need to create a Dockerfile for the server and the client. The Dockerfile essentially contains the build instructions to build the image.

And it using the docker build command

To start the entire application services we need to run the following command:

Note: You need to update the .env file in the backend since we are running the services within the docker container.
i.e MONGO_URI=mongodb://mongodb:27017/DashboardApp

Go to the project directory and run

The app will start running at localhost:3000

Let me know if you need any help :)

Here are the links which you might find useful:

Once suspended, akshayca will not be able to comment or publish posts until their suspension is removed.

Once unsuspended, akshayca will be able to comment and publish posts again.

Once unpublished, all posts by akshayca will become hidden and only accessible to themselves.

If akshayca is not suspended, they can still re-publish their posts from their dashboard.