In the Enterprise Database Security session I presented at Aerospike Summit 2020 I gave an overview of network security with Aerospike Enterprise.

To provide context, refer to the following diagram depicting an Aerospike deployment.

On the left we have developers building applications and back office jobs that will use an Aerospike database.

In the middle we have an Aerospike cluster managed by one or more administrative groups such as SREs, DevOps, DBAs, etc.

And on the right we have downstream systems which ingest and analyze security events and log data for use by information security teams.

The red arrows highlight where there is network connectivity between the Aerospike database and other systems or users as well as connectivity in between individual Aerospike nodes. This is where we need to apply network security.

First, let's look at firewall rules adhering to the principle of least privilege in which the firewall blocks all traffic and then rules are opened up to allow network access to only as needed.

For an Aerospike cluster there are 4 types of network traffic that needs to be allowed.

First, every Application node must be allowed to open up a TCP connection to every Aerospike node on the service port. This is port 3000 by convention but all Aerospike network settings can be configured.

However, some security models might require each IP address to be explicitly allowed:

The next type of network traffic to allow are the heartbeat connections between each Aerospike node. This is the clustering protocol in mesh mode which allows the Aerospike nodes to form a cluster.

The common rule to allow the heartbeat connectivity in the Aerospike CIDR range:

The third type of network traffic to allow are the fabric connections between each Aerospike node. This connectivity allows data to transfer between the nodes for replication and "migrations" (redistribution of data).

The common rule to allow the fabric connectivity in the Aerospike CIDR block range:

Notice that the fabric rules are identical to the heartbeat rules except for the port. If the configured ports are sequential then the rules for heartbeat and fabric can be combined for firewalls that allow specifying port ranges:

The fourth and final type of network traffic is only applicable for deployments which are using Cross Datacenter Replication (XDR) to replicate data between Aerospike clusters in different data centers or cloud regions.

The rule to allow traffic from the XDR source cluster to the XDR destination cluster using CIDR blocks:

Notice that the xdr rules are identical to the service rules except for the source being the XDR source instead of the Application nodes. The rules for service and xdr can be combined for firewalls that allow specifying multiple CIDR/IP ranges:

The second part of securing the network is about using TLS to encrypt data in transit and ensure connections are only established with trusted machines on the network. 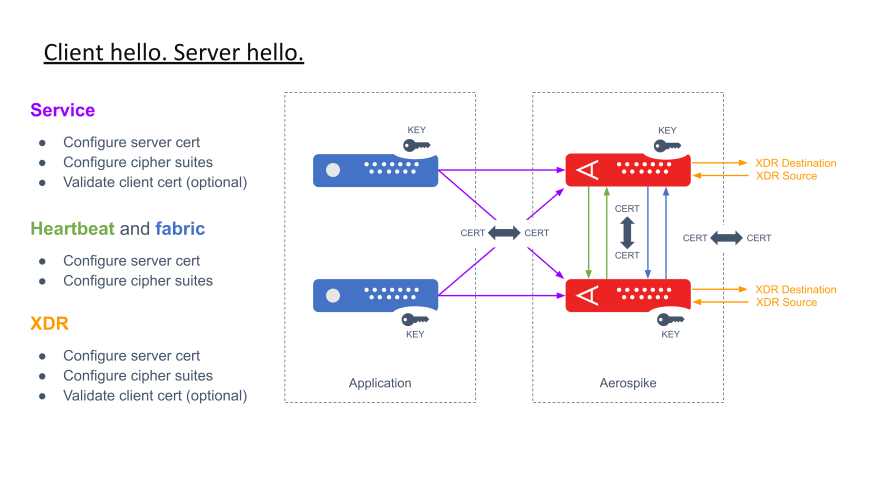 When TLS is enabled on the fabric or heartbeat connections, they will always use what amounts to mutual authentication for those Aerospike-to-Aerospike connections. So once again, if a “bad actor” somehow breaches the private network, they could not pretend to be another Aerospike node in the cluster nor decrypt any of the data transferring between nodes without possessing the appropriate private key.

Obviously, standard TLS with a single cluster-wide certificate is the simplest in terms of setup and management complexity. And if you’ve spent much time dealing with certificate lifecycle management, one certificate certainly sounds more pleasant to manage than dozens, hundreds, or thousands. And indeed it is.

But for organizations adopting more of a “zero trust” model, perhaps within environments dealing with highly sensitive data, on networks which the organization has deemed as untrusted such as the public cloud, unique certificates on each node may be required.

However, most enterprise use cases will fall somewhere in between these two extremes and the flexibility of Aerospike’s TLS configuration will allow it to be tailored to the specific needs of the organization, the environment, and the use case.

A cipher suite is a set of algorithms that are used in various phases during the TLS communication. The protocol allows for the client and server to negotiate which set of these algorithms both sides support.

Every TLS connection I described in the previous section can be configured as to which cipher suites are allowed and in what priority. 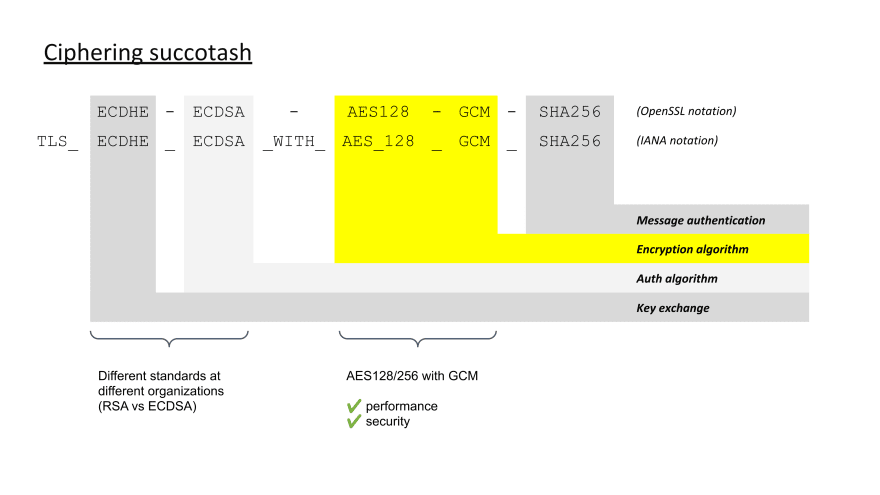 Unlike a public, internet-facing application, many Aerospike deployments are done in environments where the organization is in control of both the client and the server. That means that compatibility with public clients like web browsers is not a factor and the list of allowed cipher suites can be narrowed down to just the more current algorithms which provide the best security and performance.

At the time of this presentation, that is highly likely to mean a cipher suite using AES encryption, which has hardware acceleration built-in to modern CPUs, using Galois Counter Mode or GCM, which also typically out-performs previous block cipher modes.

Once unpublished, this post will become invisible to the public and only accessible to Micah Carrick.