Pre-requisites: Basic knowledge of APIs and Python (Not even Django!)

Knowing how to create APIs is one of the best superpowers that you can have as an Engineer. 👀

If there is absolutely any data you can serve- JSON, Text, Dumps, Images, Music- Anything from your project output, you need to serve it in an API. The new JAMstack way of development (Which I will write about soon!) works by abstracting the database away, and serving the contents of the Database as JSON. I recently talked about Strapi, which is a headless CMS, doing exactly this.

DRF is a Django Rest Frameworks which makes it easier for us to make APIs. You can do the same thing in say plain ol' Django, or Node, or Flask- or any other language! But personally, I use DRF to make custom APIs.

In this article, we will develop an API for an employer! When I curl the final result, I get the names of all my friends.

Not very fancy, right? However, stay with me. Once I am done with the basics you will know how to scale this to your next project. Note that I am not using any environments, but you absolutely should. This is so that the average programmer here is not confused beside what they already are in terms of APIs. Make a file called drf-tutorial and cd into it.

Now you will need to install certain libraries in Python.

Once you have these installed, and are in chosen directory, start a Django Project.

This will give you a new project myproject and a new Django app called myapp. If you are familiar with Django, you already know the contents inside of myprojects and myapp. Incase you aren't, Here is a great introduction to it.

Go to myproject/settings.py, and scroll down till you see Installed Apps

Change to include myapp and rest_framework to it.

Here is the official documentation of Models

A model is the single, efinitive source of information about your data. It contains the essential fields and behaviors of the data you’re storing. Generally, each model maps to a single database table.

This would create a database equivalent of emp_id, firstname and lastname as columns. Time to make migrations!

Under myapp you need to make a new Python file called serializer.py

Serializers allow complex data such as querysets and model instances to be converted to native Python datatypes that can then be easily rendered into JSON, XML or other content types.

We are taking the value and exporting it as JSON of firstname and lastname!

Views.py is responsible for what you will get on querying this data. It uses models and the serializer to render the JSON from Database.

We pass all the objects of employees class to employees1 variable.

We declare a new variable serializer and call employeeSerializer which we declared in serializer.py

Now all we need to do is return the Response of serializer.data

And that's all from the logic perspective!

Now we need to connect this logic to URLs.py!

It looks something like this now, but we will update it to include employee API.

path() takes a regular expression argument, just add the address where you'd like to see our API!

website/employees will have your API result in this. It goes to views.employeeList.as_view() [as_view() returns the response of the API as a callable view].

So now we are done!

Now go to your localhost address specified in your command line output, and add a /employee. 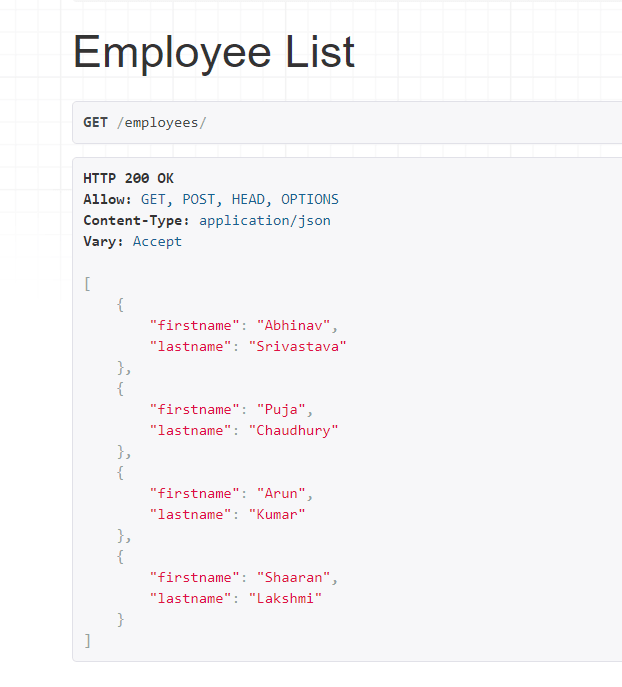 All the best, and tag me in your projects.