Password-less login is kind of a misnomer since passwords are involved in one way or another in any authentication step. Even in a biometric system, your biometrics act as a password. The idea of password-less revolves around creating temporary passwords for users. Thereby reducing the attack surface. Rest assured, if the password changes each time, then the attacker will have to get access to the user's email or phone number to crack the system.

This article is a part of series of blogs where we will build the backend and frontend for a password-less authentication system from the ground up. The code used here should not be used as seed code for any project as the project itself is supposed to give an insight into the working of the paradigm.

If you want a more concrete implementation or a module, I would recommend checking out Authboss. It is a complete set of offering for Go devs to integrate secure authentication in their systems.

In this article, we will delve into the design of our system. This article will not be code-intensive and is meant to give you an idea about what we will be building in successive blogs.

For the backend, we will be using the following:

Simple right? I will not be discussing the frontend stack just yet because I feel conflicted. On one hand, it would be easy and probably niche to build the Frontend stack with React. On the other, I am curious to explore what Rust offers. So let's keep that one in limbo for now.

The system consists of two parts - a sign-up and a sign-in mechanism. We will not be going beyond this in the spirit of keeping things focused. You may try to replicate the stuff and add it to your Todo list app if you want to :) 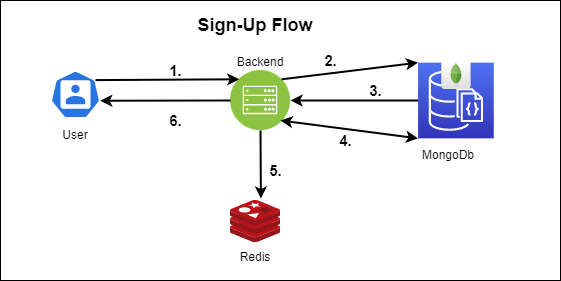 The Sign-up Phase will consist of the following steps:-

The user then needs to check his/her/it (don't want to offend any bots reading this) and enters the OTP. This completes the Sign-up flow. The user's profile is verified.

You can take it up a notch and implement the following mechanism:- 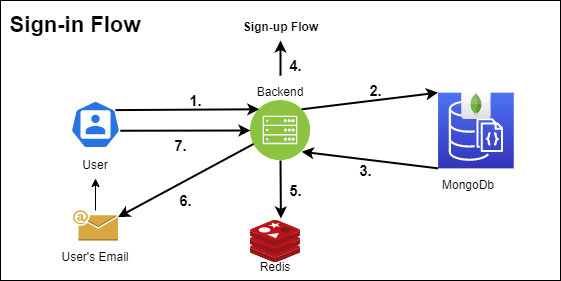 This step would be quite similar to the flow above in representation. The steps, in this case, would be:

We do not store the Auth token in Redis or MongoDB. The user is responsible for maintaining it. In the case of a full-stack app, this would mean the Auth token might be kept in the browser's cache and attached to every API request.

Apart from this, we will build the API endpoints for the following:-

We can go ballistic and implement a friend request setup here. But we will keep that for the future.

Unfortunately, this concludes the current article. All the code for the article series will be made public on GitHub. In the next article, we will design the routes/endpoints and arrange connections for the DB. The article after that will see the implementation of the controllers for those endpoints.

I am taking a break of sorts from my usual blockchain-themed articles and during this time would love to deal out some interesting articles like the ones discussed above. If you liked the article and wish to follow the series, feel free to follow me and leave a reaction. Until next time, continue to build awesome stuff and WAGMI!

Why I love Mastodon