What are asynchronous calls and why should you bother?

Put simply, with a synchronous call, you would give a task to a thread - like fetching data from a database - and the thread waits for this task to be finished and wouldn’t do anything else until the task is done.

With an asynchronous call, this thread wouldn’t wait, at all. Instead it would be open for new tasks and as soon as the other task - e.g. fetching data from the database - is done, it would grab the data and return it.

In our current application this isn’t really necessary. We have no database calls that take lots of time. Our tasks are done in milliseconds. Additionally, it’s very likely that you have more than one thread available for your application. So even if one thread is waiting for a task, another thread can do another task.

But in large applications with lots of users, it can really happen that all threads are busy. In this case, your app won’t respond to a request anymore, which leads to a terrible user experience and you may even lose users or even paying customers because of this. So, this can lead to serious trouble.

That’s why it doesn’t hurt to know this and also implement it early in this project. Although the methods in the CharacterService won’t do anything asynchronous, they will later on when we fetch data from the database.

Let’s start off with the ICharacterService interface.

Here we just add the Task type to our return types.

Of course, we also add the using directive for System.Threading.Tasks.

After that we switch to the CharacterService class and also add the Task return type and the using directives. Additionally we add the word async to the methods.

Now we’ve got asynchronous methods. Don’t mind the warnings for now. The code will still be executed synchronously, but when we add Entity Framework with database queries later on, we’ll have asynchronous calls.

Last but not least is the CharacterController. Again we add the Task type with the corresponding using directive and the async keyword to every method. Additionally we add the keyword await to the actual service call. That’s how we call an asynchronous method.

That’s it. Making test calls with Postman will return exactly the same results as before. Again, please don’t mind that making all these methods asynchronous is not necessary for such a small project, but you’re here to learn something, I guess, so that’s how you should do it with large applications.

Another practice you might come along in professional projects is to return a wrapper object to the client with every service call. Advantages are that you can add additional information to the returning result, like a success or exception message. The front end is able to react to this additional information and read the actual data with the help of HTTP interceptors, for instance, and we can make use of Generics to use the correct types.

Let’s add that object to our models first. So create a new class and call the file ServiceResponse.

The actual class name would be ServiceResponse<T> where T is the actual type of the data we want to send back. Then we can add some properties.

The Data of type T is, well, the actual data like the RPG characters. With the Success property we can tell the front end if everything went right, and the Message property can be used to send a nice explanatory message, e.g. in case of an error.

Similar to the asynchronous implementations, we don’t really need that now, but you will thank me later when you’re working on bigger projects where these kinds of things come in quite handy. For instance, when you catch exceptions in a try/catch block, a ServiceResponse like this might help you.

Let’s start with the interface. We simply add the ServiceResponse class here.

After that, we do exactly the same in the CharacterService class.

Of course, we also have to make changes to the actual implementations of the methods. In general, we create a new ServiceResponse object in every method and set the Data property accordingly.

The CharacterController stays exactly the same, no changes necessary here.

When we test the calls with Postman now, the results look a bit different. For example, here’s the result of getting all RPG characters.

You see, our characters are wrapped in our ServiceResponse. The front end could react to the new properties and provide a smooth user experience with toasters or something similar instead of presenting complex exception messages in the console - or worse, a frozen application - in case of an error.

You already read about them, now it’s time to use DTOs. First things first, let’s create a folder called Dtos and then another folder called Character for all the data transfer objects regarding the RPG characters.

As already mentioned, the idea behind DTOs is that you’ve got smaller objects that do not consist of every property of the corresponding model. When we create a database table for our RPG characters later in this tutorial series, we will add properties like the created and modified date or a flag for the soft deletion of that character. We don’t want to send this data to the client.

So, we map certain properties of the model to the DTO. That would be the case of returning data to the client.

But it also works the other way around. We already created a new RPG character by only providing an Id and a name. So, why not use a type that only consists of these two properties or other properties we want to use? This is even more important when you build a front end that should use a specific type for the creation of a new character.

At the moment, we have these to cases: Receiving RPG characters from the server and sending a new character to the server.

Regarding the GetCharacterDto, it should look exactly the same as the Character model for now. I know, it does not seem to make sense, but I don’t want you to be overwhelmed by implementing anything Entity Framework related at the same time. Adding the DTOs is a good preparation.

The AddCharacterDto looks a bit different. Let’s say we want to send every property but the Id to the service. So we can copy the properties of the model again, but remove the Id.

Now that we have our DTOs ready, we can use them in our controller and service methods.

We start with the ICharacterService interface. Instead of the Character type we now returnGetCharacterDto . The parameter of the AddCharacter() method now is of type AddCharacterDto. We also have to add the corresponding using directive.

As you can see, Visual Studio Code is not happy with that change. The types do not really match. That’s where we have to map the DTOs with the model. It’s time for AutoMapper.

But before we jump to AutoMapper we also have to fix one small thing in the CharacterController. We change the parameter type of the AddCharacter() method to AddCharacterDto.

With that, we don't have to worry about the controller when we're adding AutoMapper.

We could map the objects manually by creating a new instance of the necessary class and then setting every property one by one. But the idea behind AutoMapper is that it’s doing exactly that for us on the fly.

But first we have to install AutoMapper, of course.

When the installation is done, you’ll see a new entry in our project file.

After the installation we jump to the Startup.cs first. In the ConfigureServices() method we register AutoMapper with services.AddAutoMapper(typeof(Startup)); and add the using directive using AutoMapper;.

To be able to use the mapping of AutoMapper, we now need an instance of the mapper in our service. So in the CharacterService we add a constructor and inject IMapper. Again, we can initialize a field from that parameter and add an underscore to the private field.

Now we can use the _mapper to set the correct types to the Data property of our ServiceResponse. Let’s start with the GetCharacterById() method. Using the Map() function we first decide in angle brackets which type the value should be mapped to, and the parameter is the actual object that will be mapped.

The changes for the other two methods are pretty straight forward. In the AddCharacter() method we first map the newCharacter into the Character type, because it will be added to the characters list. So, it’s the other way around.

To map the whole characters list in one line and give it to the serviceResponse, we use the Select() method of LINQ followed by a lambda expression, where we map every Character object of the list into a GetCharacterDto.

And finally in the GetAllCharacters() method, we map every single RPG character of the characters list with Select() again, similar to the AddCharacter() method.

Alright, let’s test this now with Postman. Let’s try it with the GetAll route (http://localhost:5000/Character/GetAll).

So, as soon as our Web API is running, run the call in Postman… and we’re getting an error.

AutoMapper does not know how to map Character into a GetCharacterDto. You might ask yourself, “it’s called AutoMapper, so why isn’t this working automatically?”

Well, we have to configure one more thing, but then, I promise, AutoMapper is working fine.

We have to create maps for the mappings, and this is organized in Profiles. You could create a Profile for every mapping, but let’s spare the hassle and just create one class for all profiles for now.

At root level, we can create a new C# class and call it AutoMapperProfile. This class derives from Profile. Make sure to add the AutoMapper using directive.

Regarding the implementation, we need a constructor with no parameter and then create a map for the necessary mapping. And, of course, add further using directives.

Now everything works as expected. The same for returning a single RPG character.

But what about adding a new character?

We have to create another map. Let’s do that. This time we map the AddCharacterDto to Character.

When we test this now, you see that everything works, but the id is 0. That’s because the AddCharacterDto does not provide an Id. That’s exactly what we wanted. Still, let’s fix this by generating a proper Id ourselves.

In the AddCharacter() method in the CharacterService we first create our new Character based on the DTO and then set the correct Id by finding the current max value in the characters list and increasing it by 1.

Now, without even sending an Id, Percival gets the correct one. Later, when we use Entity Framework Core, it will generate the proper Id by itself. 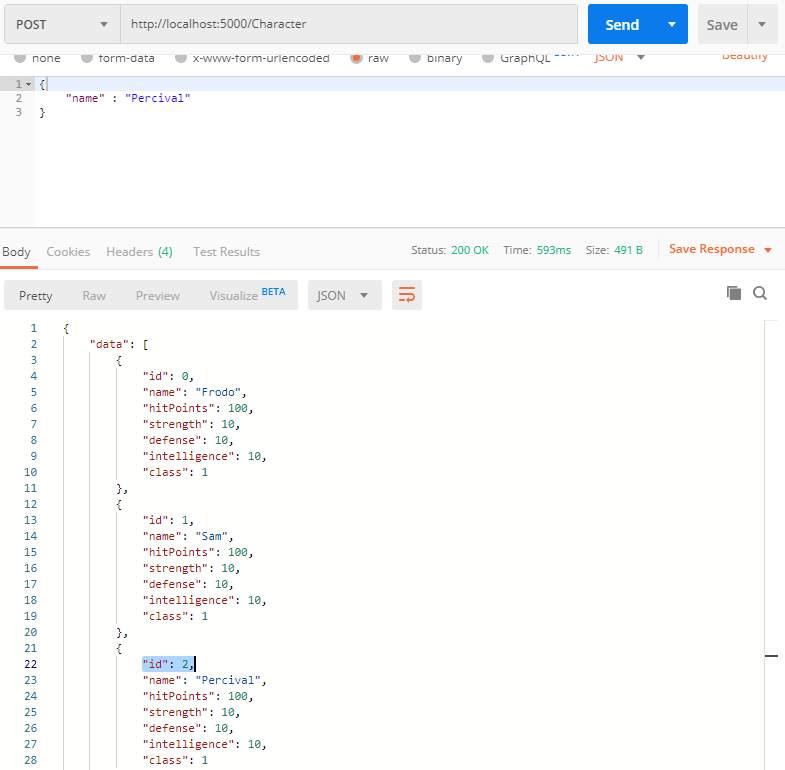 Alright, we’re done here. I know it was a lot and maybe way too much implementation for such a small project, but in large real-world applications, that’s how it’s done.

That's it for the third part of this tutorial series. Hope it was useful to you. To get notified for the next part, you can simply follow me here on dev.to or subscribe to my newsletter. You'll be the first to know.

Next up: Update & remove entities with PUT & DELETE