Many people find traveling to Russia an extreme and exotic adventure. Some say that once you enter the country, you won't be able to use any social media; some are afraid to be lost without any English speaking people around. Is it that way? Does each Russian drink two shots of vodka every morning?

"To Russia with love" is a series of interviews with techies from Western Europe and the USA, who came here to share their experience at JUG Ru Group conferences. We'll talk about expectations and impressions, people and culture, cities and conferences, visas, and security. So, stay tuned!

Jessica Deen @jldeen is a Cloud Developer Advocate for Microsoft focusing on Azure, Containers, cloud, OSS, and, of course, DevOps. Before joining Microsoft, she spent over a decade as an IT Consultant/Systems Administrator for various corporate and enterprise environments, catering to end-users and IT professionals in the San Francisco Bay Area.

When she's not doing something geeky, you can find her doing something active, most likely running out of breath at her local CrossFit gym. Yes, she's one of those! She also enjoys biking (motorcycles and/or bicycles), shooting, eating, reading, and hanging with her 5-year-old rescue pup.

Ruslan: Hi, Jessica! We're going to talk a little bit about your experience of coming to Russia. The first question is easy: is it your first time here?

Jessica: It is my first time in Russia.

Ruslan: What were your expectations before you came here?

Jessica: So, I didn't really know what to expect. I had heard both reassurances and positive experiences, but then I also heard worse case scenarios, where people get stopped at the border, have problems with visas, something went wrong, and so on… I love traveling, but it's not only my first time in Russia, but it's also my first time entering a country with a visa. There were a lot of unknowns, but I was also, I guess, excited.

Jessica: Correct. Traveling with a US passport, I need a visa for China, Brazil, Russia, and I'm sure there are others, but those are the 3 common ones I'm aware of. Russia was the first one I have to go through.

Ruslan: Then you have my congratulations on your first experience of having a visa! Has Russia met any expectations you've had?

Jessica: I was strongly encouraged to attend by Baruch @jbrauch and he pretty much said, that once you got the visa, don't worry, it's going to be fine, you get off the plane, you hand your card and they let you through. I said: "Okay, hopefully." And that met all of my expectations. It was very easy. I just hand it, get through, and then I was even surprised, not only did I get through very quickly — my bag came out very quickly. And I was off the plane and on my way to the hotel in 20 minutes. I have waited in passport control in other countries without visas for an hour. I guess, in that sense, it exceeded my expectations because the process of getting through was very fast.

Ruslan: Great. So, maybe there were some mind-blowing mismatches of expectations and reality?

Jessica: Long queue, questions, interrogation… Even in other countries that don't have visas, like Israel, you have interviews and they ask you several questions, and then you go through high security, and secondary screening, and so on. Russia was actually very easy.

Ruslan: That means, you've done all this job in advance in the United States.

Jessica: Well, I think the hard part, or the part that maybe takes a little bit longer, is waiting for the visa. But once you have that, the actual process, when you're on the plane and arrive in the country — that was easy.

Ruslan: You give a lot of talks here and there, do you feel any difference in the audience? This question is more about your conference experience. I mean, it's known that Northern European people are more sort of cold and if you go to some southern countries, they are more expressive, more loud and more talkative. What would you say about Russia in this way?

Jessica: I'm just gonna use the comparison initially. When I was in Israel, I had trouble engaging the audience there. And in talking to Baruch I said that they came off this cold, I just didn't know how to read them, because it wasn't what I'm used to, as may be like in the Western US. And so he prepped me and said: "Don't be surprised if Russia's the same way." So, I used that as my benchmark.

However, in the session people were laughing, people were engaging, they came over afterward, and asked questions, and wanted to take pictures. I actually felt that it was a lot warmer than I was told it was going to be, which also exceeded any expectations or was just different from what the expectations were. So, I felt, that it was not cold, it was the opposite.

Ruslan: Okay, great! Some people say that the Russian audience consists more of in-depth techs guys. What about the discussion you've had in the discussion zone after your talk and the questions you were asked?

Jessica: I mean, the questions and conversations I had were very positive, it was informative, it was the feedback I can take into consideration. You could tell that the audience, at least in my experience, genuinely listened and felt as so they got something out of it. And then I as a speaker can get something out of their feedback or anything that may be needed clarification, that I can then improve in future sessions to make sure that that is clarified in advance, but, I mean, overall the conversations sounded mutually beneficial.

Ruslan: Russian people are well-known for being extremely direct, the culture is rather direct as well. It's not about going all around the topic, so if people want to say something like "I think, your code is shit", they say it exactly this way. Did you face that? And how do you feel about it?

Jessica: No one said my code was shit, so that was good [laughs]. Actually, one person came over and said that he has never seen a speaker, who can keep both a developer's attention and an operations person's attention. And so, he thanked me for being able to do that.

The US is known for dancing around the truth. Most of the places in the world are very direct, so I honestly appreciate the feedback from places and audiences that are direct, like Russia, Israel, Eastern-Western European world mindset. That feedback means more, because, I know it's honest. When somebody says it in the US "I loved your session!", there are chances they probably mean "It was shit". I just find honest feedback to be a lot more helpful. 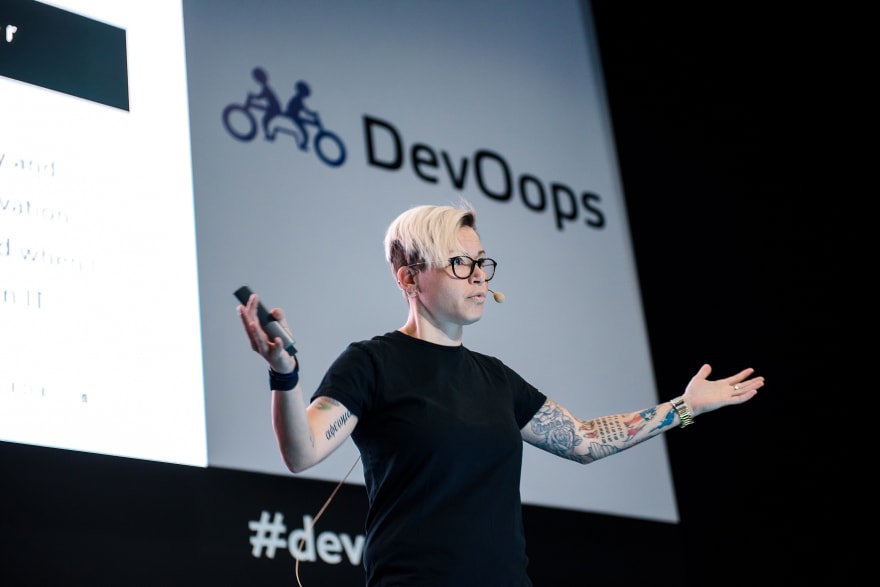 Ruslan: Let's talk about security a bit. There are two types of security I'm trying to point out. First of all: did you feel safe on the streets? And secondly, what do you feel about security when you face government? I mean, that's a question to ask in Russia, because there are a lot of talks about that stuff.

Jessica: I think from a personal perspective before I go to any country, I always do a little bit of research, because I'm very self-aware, I often travel alone, I'm small-framed, I'm female, I'm obviously foreign in any other country I go to, I look very American. So, I think, I need a little bit of research as far as how alerted do I have to be. I felt very comfortable walking around outside in Russia because I was already doing research. Saint Petersburg is one of the safest places you can go, daytime or nighttime, which is not the same in other areas. So, from a personal safety perspective, I felt fine and there is no concern.

From a government security perspective… One of my biggest fears is ever doing something wrong in a different country, especially when I don't know laws, or customs, or government rules. So I always try to look up and make sure I know what is expected and then make sure that I'm within those guidelines. But I guess, I don't know, I haven't been in Russia long enough to have an opinion about the government.

Ruslan: For example, looking back at the crossing the border process. Was it okay?

Jessica: I have definitely been asked other questions and been more concerned about the government in other countries, than in Russia. I guess I can change my opinion after I travel back tomorrow, I can let you know, how the exit experiences…

The exit went well, I've contacted Jessica afterward, and here is how it went:

Jessica: The departure went ok. Some parts were a little hard to navigate only because security and some staff spoke only Russian and not English. I recall asking why there were two lines to enter into VISA control, and the person just shook his head and pointed to someone else. I ended up just getting allowed through, but I remember wondering how I could have communicated more effectively. Other than that, it went fine. Thank you so much for everything! I very much enjoyed my time there.

Ruslan: Did you face any surprises during this travel?

Jessica: I always try to find the positives in any experience, even when I've gone to countries and went through airport security and got secondary screenings or detain. I don't tend to look at that as a negative. That's just a learning experience. And in Russia obviously, I wasn't long enough to say I had anything that was potentially negative. The only sort of negative thing was getting to be here, considering how long it took to get the visa, cause I had tried previously last year and this is my second attempt. I feel very privileged and honored, I don't know the next time I'll get to return. So the entire experience, I think, is just positive from that perspective. I feel very fortunate to have been there.

We thank Jessica for sharing her experience with us. Next week we'll introduce another guest, so stay tuned!

What is the DevOps lifecycle and the Best Practices Followed?

How to Develop Successful Dropshipping Software Integration with eCommerce Platforms