(Initially published on my blog.)

Pipes and redirects are a core concept of using the command line in any UNIX like system1. With the new WSL2 package UNIX like concepts are becoming more and more important for developers using Windows as well. Redirecting inputs and outputs is core to how the UNIX system was designed. The rise in popularity of functional programming3 is a great reason to explore this concept again.

This article will help you dig into the concept, and understand why pipes and redirects are so beautiful and versatile. You will be able to take this simple and beautiful design, and apply it to how you design your application's code.

When you run an application from your terminal, you are mostly interested in the output of your application. Say you run the ls (or dir on Windows), you expect to see a list of files in the current working directory. 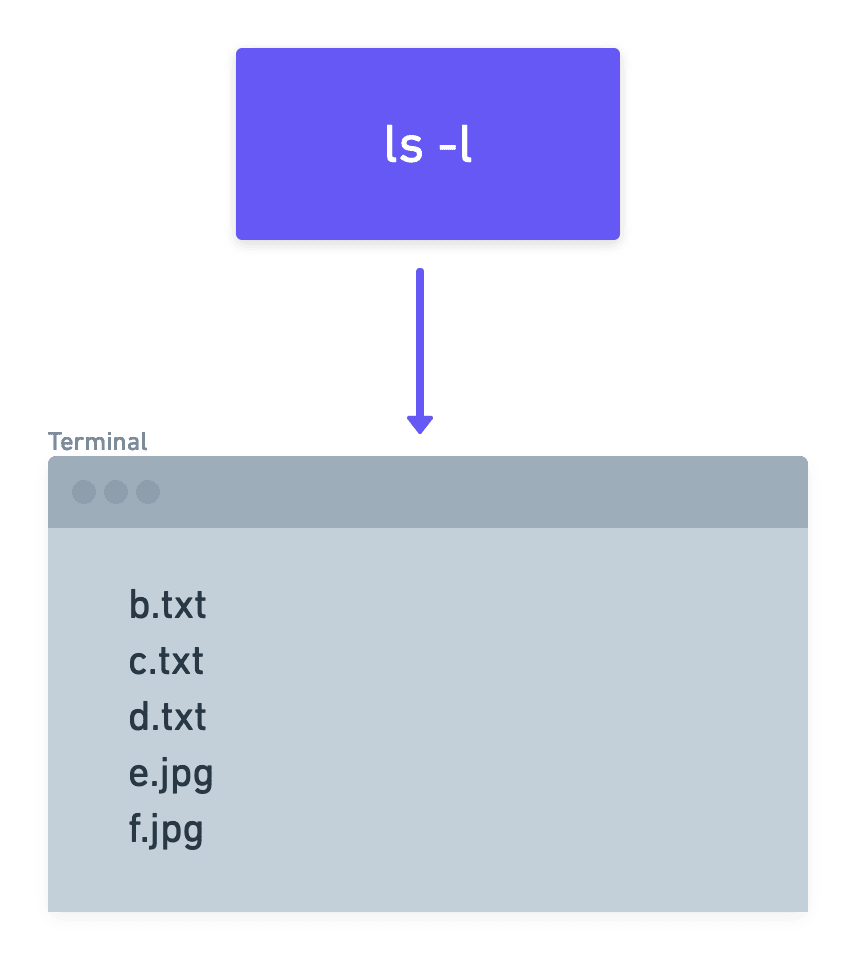 There is not much of a concept behind this, it is just the way you would expect things to work.

You could even say, that in this scenario, there are two elements involved: The application ls, which outputs the list of files from a directory, and the terminal4, which receives this output as its input and makes the letters appear on the screen. 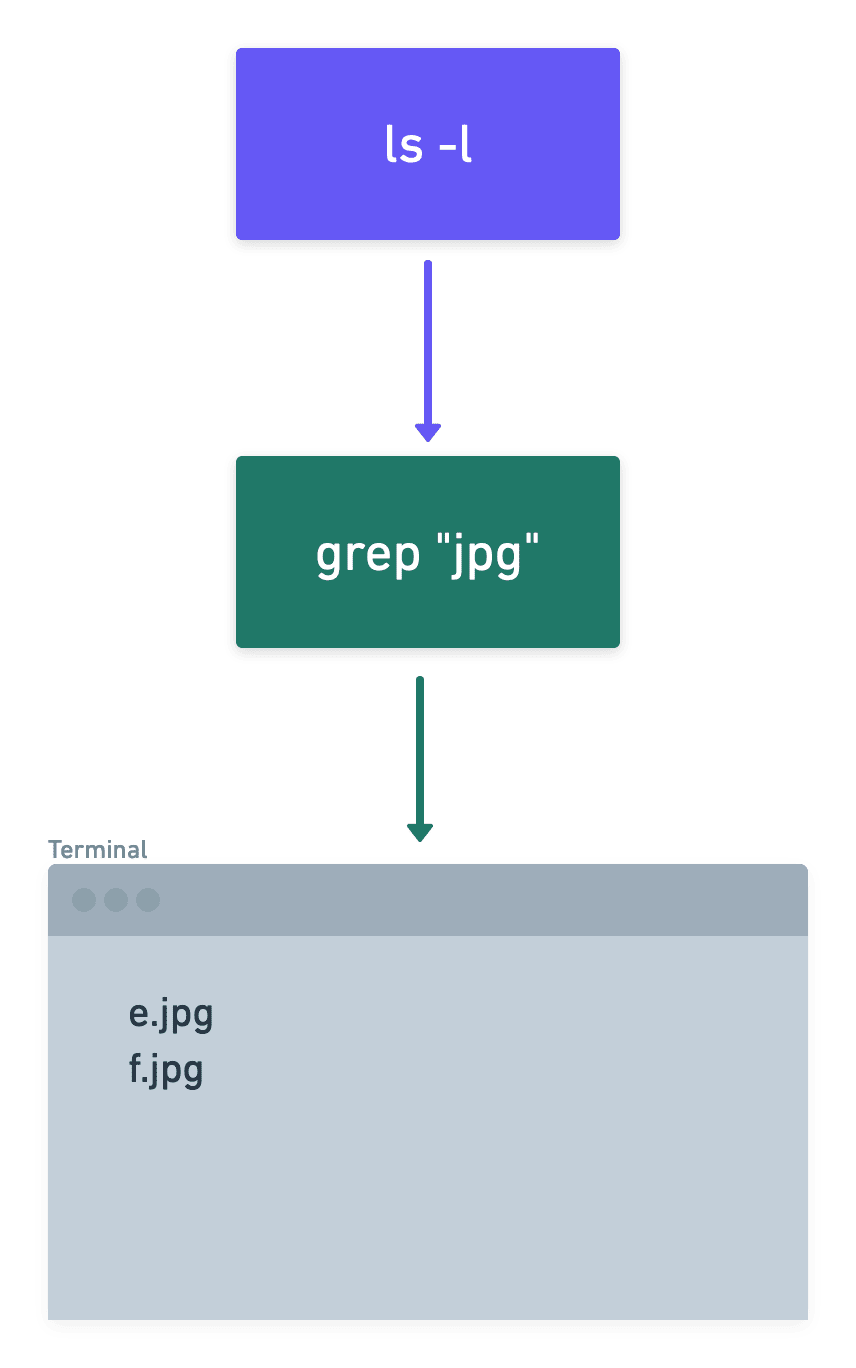 In our little example, the ls -l command will output the list of files in the current directory (see above), and the command grep "jpg" will act as a filter, that only allows lines that have "jpg" in them, to pass through to the terminal. Syntactically this is achieved by putting a little vertical bar | (called pipe character) between the two commands.

You could also understand this setup as a list of commands, chained together. You can chain as many applications in a row as you like: As long as you always have some kind of output, to send to the next command as input, your chain will work perfectly fine.

And this – I think – is the beauty of the UNIX pipes concept: No UNIX system comes with an app, that lets you output the list of jpgs in a current directory. But you can easily make this happen by chaining a command that can output all files to a command that can filter filenames including "jpg".

There are endless possibilities of what you could achieve with this kind of setup. Every new command you learn does not only give you the power of the specific command, but also allows you to use this command in context of other commands.

Just to give you one example: Let's say you have a folder full of logs for all your services for the last 7 days. You want to see all the entries from all the files, that were collected at a certain hour of a certain day, and that include a special user id.

First you probably want to output all the logs to see what they look like, using the cat5 command:

Next, you only want logs from the 11th of April, so let's filter the output:

Last, let's make sure to only output the rows for the user id 42:

Even though the command cat /var/logs/*.log | grep "2020-04-11" | grep "UID 42" might look intimidating at first, it is actually quite simple. If you build up your command chain step by step, you have full control over what is happening and can build up the complexity of this command chain one step at a time.

Understanding this concept is super helpful in doing almost anything with a UNIX like command line: You don't need to build specialized applications, that can do very specific things. You actually want the opposite: You want to make applications, that are very simple and versatile, so that they can be connected to other applications that are the same. This is the fundamental idea behind UNIX pipes.

And this simple and beautiful concept can (and probably should) be applied to all kinds of challenges, that we try to solve with code: If you need to do a lot of data processing using a Jupyter notebook6, you are basically doing the same thing: You build up your data cleaning and filtering pipeline, one step at a time.

If you are building sophisticated Javascript applications, in a "functional" way, you also follow this principle (or at least you should ;)

This design principal allows you to design beautiful and well structured applications, and at least in my opinion, it is a great way to think about the problem you are trying to solve.

Files are so special, that people usually want to have a way to deal with them in a very convenient way. This is why UNIX has two special "signs", which allow to either write to a file, or append to a file.

Let's say you want to write the output of some command you write to put into a file. I will use our logging example from above:

The > output.txt at the end of the line will tell the system to write the generated output from the last command in the chain to a file called "output.txt". If this file does not exist, it will just create a file and put the content in their. Notice, that running this line, will no longer give you any output in your terminal, because you redirected the output into a file.

This "sign" also has a sibling, which will keep the current content of the mentioned file, and just append the new output at the end. >> will append, instead of replace the content of that file.

Just like the previous command, our new example ending in >> output.txt will show no output on the terminal, as the output is – again – redirected away from the terminal, into your file.

You can find this principle in many parts of software development, from number crunching to developing sophisticated functional software.

I hope this little article helped you understand this core UNIX principle. As always, I am happy to hear about your thoughts and opinions.

Books and courses about blockchain for (not so absolute) beginners

Florian H.
Teaching Web Development at SPICED Academy in Cologne, Germany. Web developer for 20 years. Still love it. :)
JAM stack – what is it about, and should you consider using it for your next project?
#javascript #markup #API #JAM
What is CRUD and how does it help me with my application?
#CRUD #sql #javascript
Working with history, pushState and replaceState in Javascript
#javascript #historyapi