Hey, I'm Ksenia, Co-Founder of 6nomads!
It's Halloween, and I'm launching a series of investigative interviews with talent who have found work using our platform. What's the connection to Halloween? I don't know; I think I just needed some reason to start (and to do an homage to Scully!).
So... I will reveal to you the case files and how it ended!

In truth, we are curious to know how things turned out for our candidates months after their employment, and also we want to inspire others with their examples, to show that talent can and should always look for the best places for growth.

Well, as a bonus, we also expect to subtly hint that on 6nomads, looking for cool IT companies to become a part of them is almost always fast and always super convenient and effective. 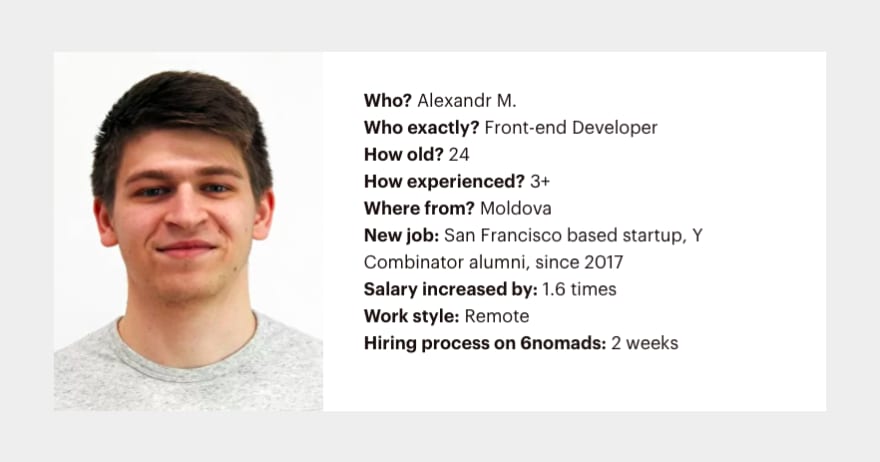 In the third year of University, Alexandr M. got a job as a developer in an American company with a branch in Moldova, worked there for 3 years, learned everything he could, and began to look for a new job for growth, scrolling Stack Overflow, GitHub jobs and local job boards sometimes.

"Once I scrolled my Facebook feed and saw ProductHunt post about a new product. The words "remote" and "startup" immediately resonated. This is exactly what I wanted to try, because there is not much choice in Moldova, and if you're going to grow, you either need to look for a remote job or move. Startups also attracted me because of the lack of bureaucracy.

So I decided to try, filled out the form and... forgot about it. The company where I currently work, wrote to me almost two months after I registered on 6nomads."

Alex had three matches back-to-back with companies on our platform. Two interviews were unsuccessful, but the third was an accurate hit/shot. Alex liked a startup, YC alumni from Silicon Valley, which build a new modern social network.

"I liked even the test task. It was a real work task that the guys had already solved. I also immediately liked the attitude during the interview. You know, there is often a feeling that the purpose of the interview is to make the candidate fail. But this time, there was a meaningful conversation between professionals, it was felt that the guys really want to hire a developer for the team."

The entire hiring process at 6nomads took less than two weeks with a test task and two interviews. And then the offer and rapid onboarding.

"I was immediately added to all the chats of our messenger — it was super convenient that the onboarding took place inside the product itself. They gave me access to Notion, GitHub, then the team leader began to throw tasks on bugs, and I quickly figured everything out."

Two weeks later, Alexandr was invited to St. Petersburg (Russia) to meet a big part of the development team in person. And a month later, to Tel Aviv for the entire team one-week meeting. The teammates had a chance to know each other, communicate live, have some rest, and participate in strategy sessions and team-building activities.

A few months later, we talked to Alex to find out how he copes with the remote work, the new startup, and a contractor's status.

— What do you like about the new style of work compared to the office?
— Flexibility. I can start working earlier, leave the computer for personal business during the day, but finish tasks in the evening. I like that the team focuses on results; no one tracks your time. If I complete my tasks on time, everything is OK. Mutual trust is something really cool.

— How to maintain motivation while working remotely?
— The team motivates most of all, the responsibility to my teammates. Our company also uses this tactic: if a new feature is going to be launched, one person is responsible for it. You just understand that no one will do it instead of you. This is not like when you can get lost between tasks in a large team in the office.

— Our interviewees often say the same thing: there is a greater risk of burning out while working remotely. Do you feel that?
— What is burnt out may never burn out!

I overworked at the last job at some period and realized that this is not OK. Since then, I just treat the tasks adequately.

I like that our CEO at the meetings often talks about mental health, physical activity, and how to keep yourself in good shape.

Also, there is another common practice in our team: you can take the day-off, and it really helps. If I feel the need, I take one day-off, and the next day I'm super productive.

— What new have you learned in your new place since the beginning?
— Here, I began to think more about top-level solutions, about the architecture of the entire application on the web and in the mobile version, not just about the code.

— You are hired to the company not as an employee, but as a contractor. Does this make you feel like a "second-rate" member of the team?
— Absolutely not! I don't care what I'm called from a legal point of view. The main thing is the attitude inside the team.

With "full-fledged" employment, there is an illusion of some guarantees, but in fact, you can also be fired at any time, or the company may go bust. I understand that something can go wrong in a startup, but in the IT-sphere, it's difficult to worry about finding a job if you are worth something.

— Do you want to move somewhere for a cool project? Or do you like your hometown and its combination with remote work for a foreign startup?
— I have three cats, so I will have difficulties with logistics!
I'm actually open to different future opportunities and do not rule out moving, although now I'm very comfortable. Our prices are low, and with the salary, you can get in an American startup, life became really good.

— What personal qualities do you think a developer should have to work remotely successfully? Is this work style suitable for everyone?
— I think everyone should try it. The main thing is just base responsibility. But can an adult, a professional, not have it? I've heard that it happens on a remote site, people just disappear and don't get in touch, but I can't understand how this is possible.

P.S. If you want to track current remote offers relevant to your skills and find gems, I also recommend you to use the 6nomads bot, which doesn’t even require registration.

Originally published at 6nomads.com, a platform where talented developers and tech startups find each other in the shortest possible way.

Find a remote job
How did a Front-end Engineer from Moldova Get a Job at California Startup in Two Weeks?
#remote #remotework #frontend #startup
Interview With the Creator of Fairytrail, the Dating App For Digital Nomads and Travelers
#digitalnomads #app #product #remote
How to Manage a Team of 43 Developers in Different Time Zones
#management #career #remote #remoteteam