Hello ! I’m Xavier Jouvenot and in this small post, I am going to explain how to specify your Xcode version on GitHub Actions.

Self promotion: You can find other articles on computer science and programming on my website 😉

If you have CI/CD processes or if you want to create some for your project, then it may be wise to make sure that you can always compile your project using the same version of Xcode as the one you are using on your machine, or the one used by your development team.

The short answer, for the people who don’t want to read through the entire article (I know you do that! I do it too 😆) is to insert the following setup in your GitHub Actions process, before trying to compile anything:

So, for example, if you want to select the version 13.1 of Xcode on GitHub Actions, then, it would look like that:

This solution uses a free GitHub Actions, under the license MIT, named "setup-xcode" and you can find all the details about it on the GitHub MarketPlace.

If you are not sure about the version of Xcode you are actually using on GitHub Actions, you can always look to the documentation relative to the image you are using (osx11 or osx10.15), or you can add the following step to you process and see the information directly in Azure Pipelines:

To make sure that, even in the future, you have working examples to look at, I have made a GitHub repository with an GitHub Actions process for each version of Xcode present on each OSX virtual environment available.

In the xcodes.yml file in the GitHub Action folder (.github/workflows) of the repository, you will see jobs set up for each OSX environment using a matrix, and "setup-xcode" action which selects a version of XCode available defined in the matrix. 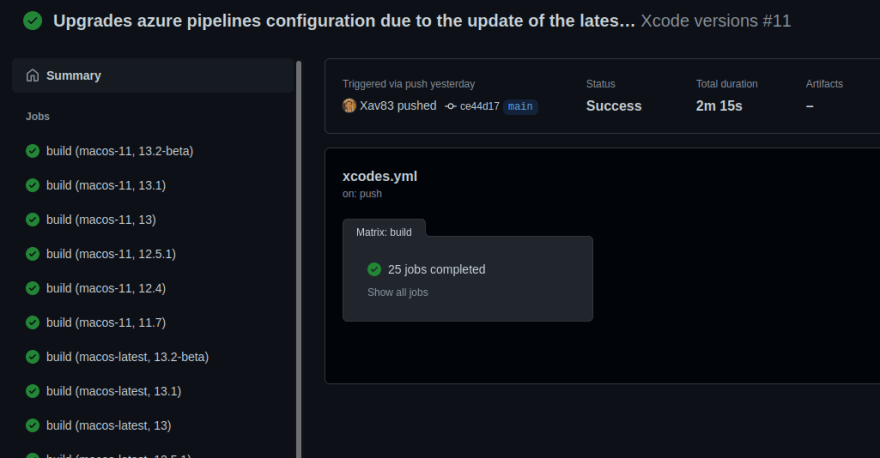 I will maintain those GitHub Actions processes when GitHub will update their environment images, so that we will always be able to use this repository as reference! So if you see a version of Xcode or an version of OSX missing, or a way to improve the GitHub Actions script, do not hesitate to create a new issue 😉

Thank you all for reading this article, And until my next article, have a splendid day 😉