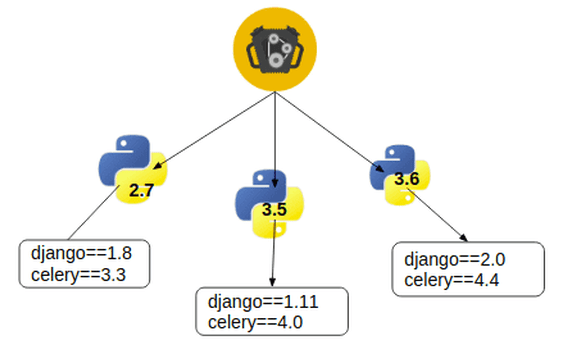 venv is a package shipped with Python 3, which you can run using python3 -m venv (although for some reason some distros separate it out into a separate distro package, such as python3-venv on Ubuntu/Debian). It serves the same purpose as virtualenv, but only has a subset of its features see a comparison here. — source

What is the benefit of using wrapping your code into a virtual environment?

Before we move on, let’s create some aliases for convenience of use.
If you type which python in terminal, it will print out the path for the python executable, which should be something like this /usr/local/bin/python3.
Then, open ~/.bashprofile you can type cat ~/.bashprofile to open it directly in terminal or use any other way suitable for you. And add there the following line:
alias python=”/usr/local/bin/python3”
Basically, we created an alias python for python3, and what it will do is each time you will be using python command it will be referring to python3, which I find neat. And, of course, you can skip this step if you want to.

Creation of virtual environments is done by executing the command venv:
In my case, I already had some script saved in folder in Desktop, so I wanted to sort wrap it in the venv.
➜ script git:(master) python -m venv /Users/user/Desktop/script
In the example above I refer to the script using the absolute path, however the relative path like ~/Desktop/script should also work.

To activate virtual environment type the following command:
➜ script git:(master) ✗ source /Users/user/Desktop/script/bin/activate
And let’s say we have a requirements.txt file, which specifies all the dependencies required to successfully running the python project, now all those dependencies/libraries will be installed and accessible only within this virtual environment.

If you exit the terminal, next time you want to run your project you will need to source ~/.bashprofile AND re-enable the virtual environment (using activate command from above).
That’s all Folks! ☕

Once suspended, 0n3z3r0n3 will not be able to comment or publish posts until their suspension is removed.

Once unsuspended, 0n3z3r0n3 will be able to comment and publish posts again.

Once unpublished, all posts by 0n3z3r0n3 will become hidden and only accessible to themselves.

If 0n3z3r0n3 is not suspended, they can still re-publish their posts from their dashboard.

Once unpublished, this post will become invisible to the public and only accessible to Lillygii.

Thanks for keeping DEV Community safe. Here is what you can do to flag 0n3z3r0n3:

Unflagging 0n3z3r0n3 will restore default visibility to their posts.