I recently helped organise a cyber security workshop for youngsters between 13 and 16. Some participants could not run virtual machines for various reasons.

Since the workshop required participants to have access to Kali Linux, I deployed Kali Linux with a Graphical User Interface (GUI) on Google Cloud Platform (GCP) for the participants. In this post, I'm going to show you how I did it.

P.S. Although I used GCP, these steps are applicable to other platforms e.g. DigitalOcean.

Since Kali Linux will be running with a GUI, I recommend allocating slightly more hardware resources.

I recommend selecting Debian 10 as the operating system, since Kali Linux is built on top of Debian. Once it's running, connect via SSH.

Add the "kali-rolling" repository to your sources.

Download the repository's key for the system to verify Kali Linux packages and add it with apt-key.

Update again. The new "kali-rolling" repository should be recognised.

Install all the things

The "kali-linux-default" package contains all the tools in a standard Kali Linux distribution.

Finally, you need to install Xrdp. This will allow you to access and interact with the GUI via Remote Desktop Protocol (RDP). 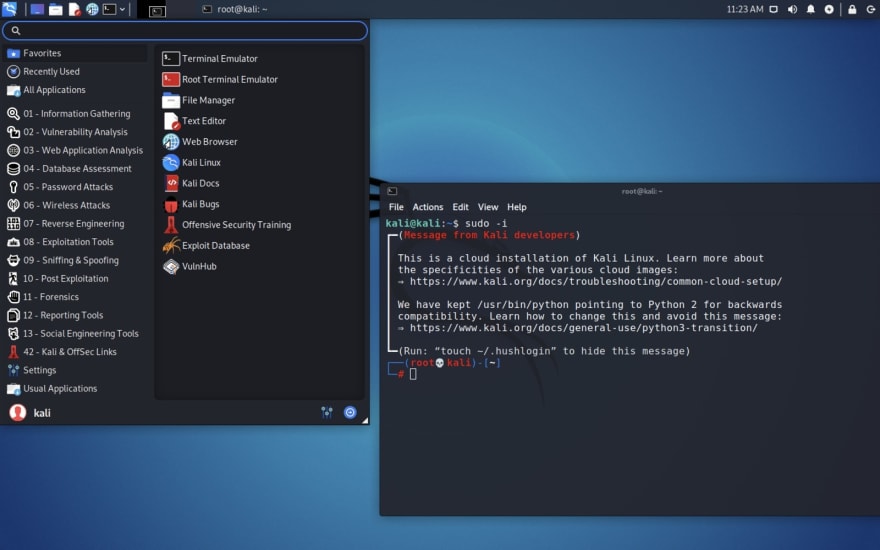 It is normal to see a black screen initially. Wait for a few moments and the desktop should appear. If it is taking particularly long, consider changing the hosting region nearer to you.

If you encounter a "login failed for display 0", make sure you have set a password for your user account.

Create a emoji-picker in dmenu

Your AWS EC2 Has Been Hacked. What Will Happen Now?

Once suspended, zuoshihua will not be able to comment or publish posts until their suspension is removed.

Once unsuspended, zuoshihua will be able to comment and publish posts again.

Once unpublished, all posts by zuoshihua will become hidden and only accessible to themselves.

If zuoshihua is not suspended, they can still re-publish their posts from their dashboard.

Once unpublished, this post will become invisible to the public and only accessible to zuoshihua.

Thanks for keeping DEV Community 👩‍💻👨‍💻 safe. Here is what you can do to flag zuoshihua:

Unflagging zuoshihua will restore default visibility to their posts.