As you most certainly already know, Jetpack Compose is the hot new thing for Android UI development. Its promise is to save us by making all the pain points of the old View system and XML layouts go away.

After many many preview versions, it got to beta status about a week ago. Here's what it's like to use Compose at the moment, and some of the best places to learn more about it.

First of all, Compose is exciting. It makes a lot of basic UI work really simple, and you get to write it all in Kotlin, making use of all the language's powerful features! The APIs have great discoverability in Android Studio, since all of it is just Kotlin code that you can access via code completion. This makes it truly easy to get started.

Kotlin's type safety also works wonders in Compose. No passing in dp values instead of pixels, or mixing up vertical and horizontal alignment options. Everything is strongly typed, and the compiler safeguards you from making many, many mistakes.

Given how much effort is going into developing and marketing Compose, it's almost certainly the future of Android UI development. That being said, the XML system will probably never fully go away. Just like the Java to Kotlin shift, it will take a couple years until the new standard really kicks in, and we'll occasionally still find ourselves interacting with code from the before times.

So... Get on board soon, just don't expect all of the old system to disappear overnight. I'd certainly still suggest learning the old XML-based system to anyone starting Android Development today - unless they're somehow very certain that they'll never work on an existing project.

Jetpack Compose comes with some cool Android Studio tooling as well. Flutter users will probably already be familiar with the handy Surround with shortcuts that let you wrap pieces of code in a new widget, and the same makes an appearance in Studio now.

Select some code, invoke Surround with (Ctrl+Alt+J on Windows, ⌥⌘J on macOS), and then hit R for a Row, C for a Column, or W for an arbitrary widget. 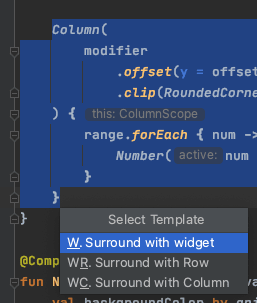 If you don't want to add any parameters, you can hit Tab to quickly skip to defining its content.

Now, let's see the bad part, continuing with the tooling theme. To run Compose, you'll have to run the latest Canary version of Android Studio. This version has... Some issues.

From my personal experience of a few days:

I heard some similar anecdotal stories from others, including excessive resource usage when using Compose compared to other projects. These were occasionally fixable by restarting, invalidating caches, restarting adb, and similar "usual" debugging practices.

Another pain point of using Jetpack Compose can be that looking up how to do things is a bit hit-and-miss for the time being. For example, when you land on StackOverflow questions about it, you'll often find answers that say "this is how to do it in dev11", or "here's the new API for this in alpha3", but then none of those APIs will be present in the current beta version.

Of course, on one hand it's nice that Compose went through a lot of iteration and they weren't afraid to change and evolve APIs - that's what the preview versions are for.

On the other, it makes for a somewhat unpleasant experience for developers trying to build things on the latest Compose version. Thankfully this situation will naturally improve over time, but we'll have to wait a bit to get enough new, up-to-date answers in.

Since StackOverflow won't be your best friend for learning Compose yet, where else can you go?

First, there's Google's official resources, which are a decent start:

If you prefer reading, RayWenderlich team's Jetpack Compose book has really solid, professional content in it, providing a complete tour for you to get started with: A nice exploration of the basic UI building blocks of Compose, as well as multiple example apps. (This, again, is slightly outdated, as its samples use alpha10. Fingers crossed that it gets a revision soon.)

To find quick snippets for how to perform basic things, the Compose Academy site can come in handy.

Finally, exploring Compose on your own is also a great way to learn about it. All of the APIs you use are just Kotlin code, so exploring through code completion, and jumping into the underlying implementation in Android Studio to read the source are super easy. The in-code documentation for most Compose APIs also tends to be excellent.

Are you excited and ready for Compose? We know that we are, and you can look forward to more Compose content from us soon, including in our Android Chat SDK.

Tweet at us @getstream_io and tell us what you think about Compose, and what you found to be the most useful way to learn about it!

What Is a Video Container Format?

Is there any point in launching an app?