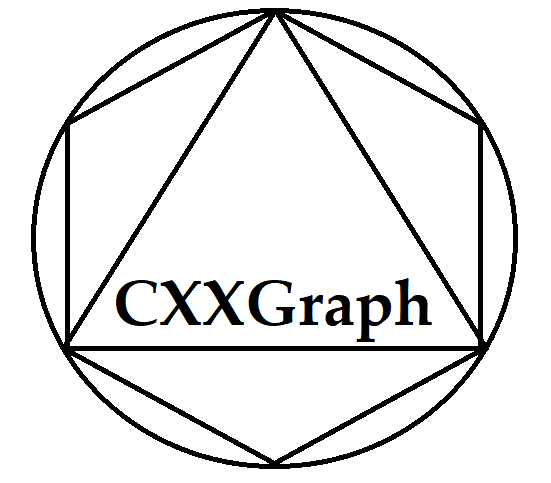 CXXGraph is a small library, header only, that manages the Graph and it's algorithms in C++. In other words a "Comprehensive C++ Graph Library".

Graph Dijkstras Shortest Path Algorithm(Dijkstra's Shortest Path) Dijkstra's Algorithm is used to find the shortest path from a source node to all other reachable nodes in the graph. The algorithm initially assumes all the…

CXXGraph is a small library, header only, that manages the Graph and it's algorithms in C++. In other words a "Comprehensive C++ Graph Library".

Graph Dijkstras Shortest Path Algorithm(Dijkstra's Shortest Path)
Dijkstra's Algorithm is used to find the shortest path from a source node to all other reachable nodes in the graph. The algorithm initially assumes all the nodes are unreachable from the given source node so we mark the distances of all nodes as infinity.
(infinity) from source node (INF / infinity denotes unable to reach).

When edge weights are small integers (bounded by a parameter C), specialized queues which take advantage of this fact can be used to speed up Dijkstra's algorithm. The first algorithm of this type was Dial's algorithm (Dial 1969) for graphs with positive integer edge weights, which uses a bucket queue to obtain a running time
O(|E|+|V|C).(source wikipedia)

Below is complete algorithm:

At this link you can find a step-by-step illustrations.

And there are many more...

And there are many more...

The existence of a cycle in directed and undirected graphs can be determined by whether depth-first search (DFS) finds an edge that points to an ancestor of the current vertex (it contains a back edge). All the back edges which DFS skips over are part of cycles. In an undirected graph, the edge to the parent of a node should not be counted as a back edge, but finding any other already visited vertex will indicate a back edge. In the case of undirected graphs, only O(n) time is required to find a cycle in an n-vertex graph, since at most n − 1 edges can be tree edges.

For directed graphs, distributed message based algorithms can be used. These algorithms rely on the idea that a message sent by a vertex in a cycle will come back to itself. Distributed cycle detection algorithms are useful for processing large-scale graphs using a distributed graph processing system on a computer cluster (or supercomputer).

Applications of cycle detection include the use of wait-for graphs to detect deadlocks in concurrent systems.

A vertex-cut partitioning divides edges of a graph into equal size partitions. The vertices that hold the endpoints of an edge are also placed in the same partition as the edge itself. However, the vertices are not unique across partitions and might have to be replicated (cut), due to the distribution of their edge across different partitions.

Replication factor quantifies how many vertexes are replicated over computers compared with the the number of vertexes of the original input graph.

This Algorithm is a simple vertex-cut in Round-Robin fashion.
It takes the original graph edges and assign them to the partitions, dividing it in equal(or similar) size. This algorithm does not take care of optimization in vertex replication ( Replication Factor) but only balance the edge in the partitions.

The Classes Explanation can be found in the Doxygen Documentation, in the Classes Section

The use of the library is very simple, just put the header file where you need!

The Unit-Test required the CMake version greater than 3.9 and the google test library.

After the compilation, you can run the executable that is under the "build" directory with the name "test_exe", with the simple command ./test_exe.

or report an issue

.
If you want to change the code, or fix issue, or implement a new feature please read our CONTRIBUTING Guide

To support me just add Star the project

To get updated watch the project

We are referenced by:

Thanks to the community of TheAlgorithms for some algorithms ispiration.

Thanks to GeeksForGeeks for some algorithms inspiration.

We are Looking for...

We are looking for developers and committer, also at first experience, we will guide you step by step to the open-source world!
If you are interested, please contact us at zigrazor@gmail.com or contribute to this project. We are waiting for you!