JavaScript is said to be a Prototype-based language. So "prototypes" must be an important concept, right?

Today I'm going to explain what Prototypes are, what you need to know, and how to use Prototypes effectively.

First of all, do not let the word "Prototype" mislead you. The "prototype" in JavaScript isn't the same thing as "prototype" in English. It doesn't mean an initial version of a product that was quickly put together.

Instead, prototype in JavaScript is simply a word that means absolutely nothing. We can replace prototype with oranges and it can mean the same thing.

In JavaScript's case, prototype refers to a system. This system allows you to define properties on objects that can be accessed via the object's instances.

I suggest you familiarise yourself with this introductory series on Object Oriented Programming before going further.
:::

If you console.log this array, you don't see any methods. But yet, you can use methods like concat, slice, filter, and map!

Because these methods are located in the Array's prototype. You can expand the __proto__ object (Chrome Devtools) or <prototype> object (Firefox Devtools) and you'll see a list of methods. 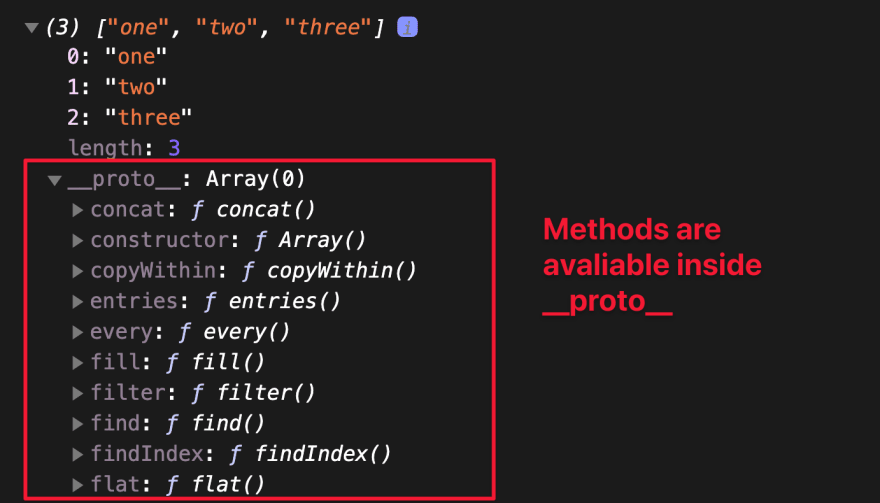 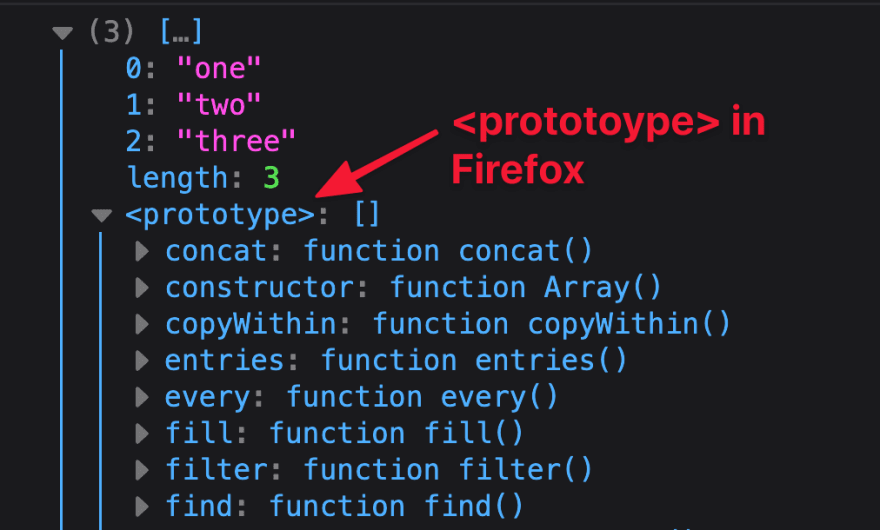 :::note
Both __proto__ in Chrome and <prototype> in Firefox points to the Prototype object. They're just written differently in different browsers.
:::

So the correct definition for Prototype is: An object where instances can access when they're trying to look for a property.

Here’s what JavaScript does when you access a property:

Step 3: If there are no more Prototypes left, and JavaScript cannot find the property, it does the following: 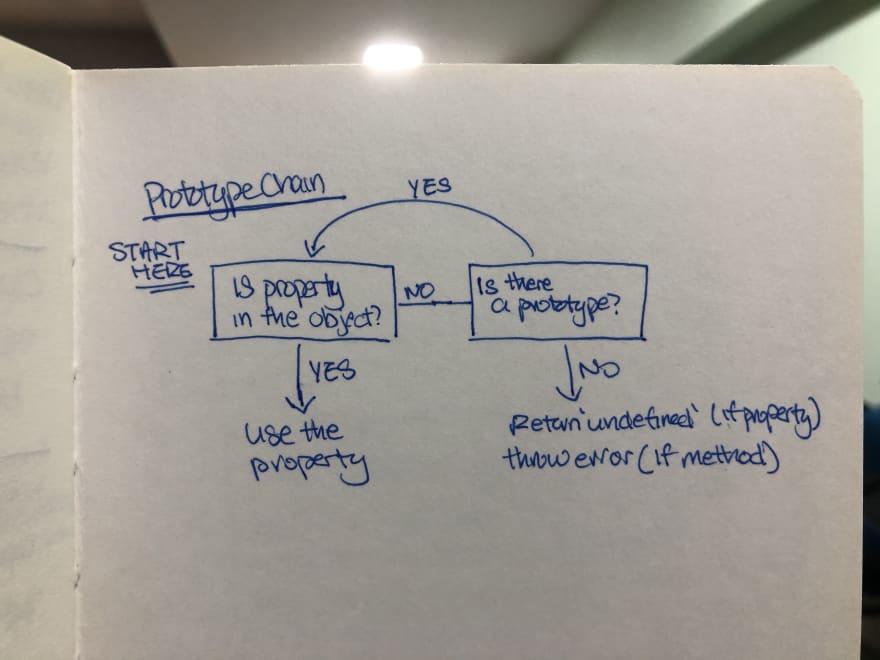 Let's say we have a Human class. We also have a Developer Subclass that inherits from Human. Humans have a sayHello method and Developers have a code method.

Here's the code for Human

:::note
Human (and Developer below) can be written with Constructor functions. If we use Constructor functions, the prototype becomes clearer, but creating Subclasses becomes harder. That's why I'm showing an example with Classes. (See this article for the 4 different ways to use Object Oriented Programming).

Here's how you would write Human if you used a Constructor instead.

Here's the code for Developer.

A Developer instance can use both code and sayHello because these methods are located in the instance's prototype chain.

If you console.log the instance, you can see the methods in the prototype chain.

Should we use Prototypal Delegation?

Since JavaScript is a Prototype-based language, we should use Prototypal Delegation. Right?

I'd argue it depends on how you write Object Oriented Programming. It makes sense to use Prototypes if you use classes because they're more convenient.

But it makes sense NOT to use prototypes if you use Factory functions.

Performance between the two methods doesn't matter much – unless your app requires millions of operations. In this section, I'm going to share some experiments to prove this point.

We'll then get the difference in timestamps to measure how long it the operations took.

I used a perf function to help with my tests:

Note: You can learn more about performance.now in this article.

First, I tested how long it takes to access a method via a prototype vs another method that is located in the object itself.

The average results are summarised in this table as follows:

Note: Results are from Firefox's Devtools. Read this to understand why I'm only benchmarking with Firefox.

The verdict: It doesn't matter whether you use Prototypes or not. It's not going to make a difference unless you run > 1 million operations.

I needed to test whether creating Factory functions was significantly slower than creating classes.

The average results are summarised in the table as follows:

The verdict: It doesn't matter whether you use Class or Factory functions. It's not going to make a difference even if you run > 1 million operations.

You can use Classes or Factory functions. You choose to use Prototypes, or you can choose not to. It's really up to you.

There's no need to worry about performance.

Step up your Regex game

Zell Liew 🤗
Frontend consultant; teaching frontend to self-taught devs at http://zellwk.com. Currently attempting to demystify Javascript at http://learnjavascript.today.
Case Conversion in JavaScript
#javascript
What's the difference between an Interface and an API?
#javascript
The Flavors of Object-Oriented Programming (in JavaScript)
#javascript