Building a secure smart contract does require adhering to the Best Practices.
And one of the most crucial practices to keep in mind is the 𝐂𝐇𝐄𝐂𝐊 𝐄𝐅𝐅𝐄𝐂𝐓𝐒 𝐈𝐍𝐓𝐄𝐑𝐀𝐂𝐓𝐈𝐎𝐍 𝐏𝐚𝐭𝐭𝐞𝐫𝐧 while making External Calls.

𝐖𝐇𝐀𝐓 𝐞𝐱𝐚𝐜𝐭𝐥𝐲 𝐝𝐨𝐞𝐬 𝐢𝐭 𝐦𝐞𝐚𝐧?
In simple terms, it means that while designing a function in solidity, any state modification in the function must happen before an external call is made.

𝐖𝐇𝐘 𝐔𝐬𝐞 𝐭𝐡𝐢𝐬 𝐏𝐚𝐭𝐭𝐞𝐫𝐧?
Remember the DAO Hack of 2016 where the attacker drained 3.6 million ETH?
Well, one of the Imperative reasons behind that hack was the Violation of Check-Effects-Interaction patterns in function code.

𝙒𝙝𝙮 𝙗𝙚 𝙘𝙖𝙧𝙚𝙛𝙪𝙡 𝙬𝙝𝙚𝙣 𝙀𝙭𝙚𝙘𝙪𝙩𝙞𝙣𝙜 𝙀𝙭𝙩𝙚𝙧𝙣𝙖𝙡 𝘾𝙖𝙡𝙡𝙨?
An external call technically shifts the control over execution to another contract or a Third Party. This allows the Third-party contract to leverage from the fact that the Contract State didn't change before the external call.

It leads to an extremely undesirable scenario where a malicious actor can re-enter the contract and disturb the expected flow. Thus, leading to a potential Re-entrancy Scenario. 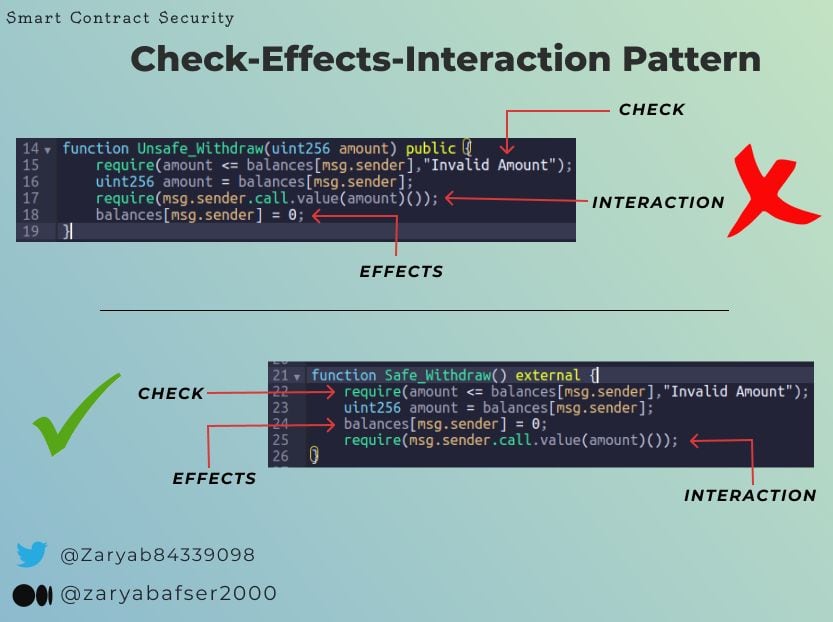 Moreover, even if attackers try to re-enter a function that follows the CHECK-EFFECTS-INTERACTION pattern, they cannot really abuse the State of the contract as it has been already modified before the external call is made.

What are Providers and Signers? What is an ABI? What are BigNumbers? How do contracts deal with ERC-20 tokens?

Decipher with Zaryab
Smart Contract Engineer and Security Auditor | I Educating the World about Smart Contracts | Lover and Believer of Web3 & Decentralized Future
Does adding a PAYABLE keyword in Solidity actually save GAS?
#blockchain #web3 #programming #webdev
Solidity Guide: Behind the Scenes of PUBLIC and EXTERNAL Visibility of Solidity
#solidity #blockchain #smartcontracts #ethereum

Once suspended, zaryab2000 will not be able to comment or publish posts until their suspension is removed.

Once unsuspended, zaryab2000 will be able to comment and publish posts again.

Once unpublished, all posts by zaryab2000 will become hidden and only accessible to themselves.

If zaryab2000 is not suspended, they can still re-publish their posts from their dashboard.