If you are a software developer then you must be familiar with Git. Git is vastly used for version/revision control for software development for controlling source code.

It is a distributed revision control system. Git is better than SVN for speed, data integrity and also support non-linear workflows.

Git was initially designed and developed by Linus Torvalds for Linux kernel development purpose. Yes you read it correct.

Like any other version control systems, every Git working directory has a full-fledged repository with complete history and full version-tracking capabilities.

Git is free software distributed under the terms of the GNU General Public License. Git utility or git tool is available with almost every Linux distributions.

Git deals with data more like a set of snapshots, snapshots of a miniature filesystem. Every time you commit your file, or save the state of your project in the git project repository, it basically takes a snapshots. So, it stores a reference to that snapshot of what all of your files look like at that moment of commit. To be efficient, fast & accurate if files have not changed, Git does not store that file again for further more changes with your commit. It just simply stored a link to the previous identical file it has already stored.

It is a great tool with great efficiency for handling large projects with hundred of thousand files with large project size. Git is primarily developed for Linux. Now a days, it also supports most major operating systems including BSD, Solaris, OS X, and even for Microsoft Windows.

How I can use Git?

There are a lot of different ways you can use Git. Most of the time we use command line tools and yes there are many graphical user interfaces (GUI) based software available as well of varying capabilities. I will be using Git on the command line or terminal over here. Command line / terminal is the place where you can run all Git commands where as you can’t get all the features of Git on most of the GUIs based Git tools.

You need to install Git before you start using it. Though most of the Linux distributions comes up with Git as preinstalled. Even if it is already there, it’s good to update it to the latest version.

For RedHat / CentOS / Fedora, use the following command in the terminal to install it:

If you’re on a Debian-based distribution like Ubuntu, try the following command to install it:

For openSUSE, use the following command:

For more different Linux distributions, there are instructions for installing on this link.

First, you need to set your user name and email address with git. This is very important as every Git commits you made uses this information.

To check your git setting, issue the following command in your terminal:

First, you must clone the git repository for your project to start with and only then you can commit your changes.

The above command is showing how you can clone a git repository from a server. The server used in this example for git repository is gitlab and abc.git is the name. You can use the IP address of the git hosting server or the FQDN of that git sever.

If you want to start your own git repository sever for your codebase, issue the following command:

This will initiate a new git repository and the machine/host can be now used as a git repository server for that particular codebase. You can access the newly created repository by using the host’s IP or hostname.

You can check the status of files in the index versus the working directory for your git repository by using the following command:

Lets add a file to your newly created git repo. Go to your working folder for your source code.

Now create a demo file by issuing the following command:

Add these following lines to the demo.txt file.

This is a demo file. This is second line of the file.

Our demo file has been created. Next, add this newly created file to the index of the git repo by issuing.

Now, we need to commit this to your git repo by using:

This will add the file “demo.txt” with it’s file content and with a comment “first commit” so that you can search it later.

Now, add a third line and commit it again.

This will update the file accordingly.

Now, push the changes to the repository.

This will push the changes into the master branch.

Deleting a file from Git

Say, you need to remove a file from your git. Just do the following one after another.

You are done removing documentation.txt from your git repository.

Say you made changes in one of your file but you don’t want to commit it to the repo then you can stash it and also you can push it later as well.

If you want to sync your local git codebase with the latest codebase of the git remote server repository, you need to use the following command. It will fetches files from the remote repository and merges it with your local one.

If you want to see a listing of commits on a master branch including details with logs, type the following

A Git repository can have multiple branch including master branch. To know your git branch, issue the following on your terminal

I tried to cover all the very basics of git in this article. I don’t want to make it complex. That’s why I don’t dive deep onto it. Hope you liked it. Thank you. 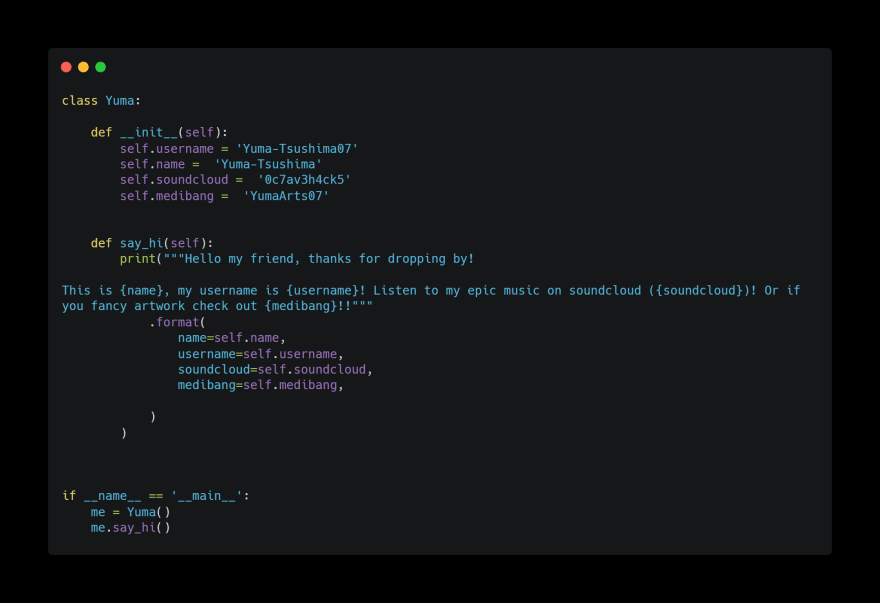 Hello, my name is Yuma-Tsushima (frequently shortened to Yuma). I am an ambitious coder, and I enjoy coding in JavaScript (mainly). I also love making websites using HTML, CSS and (of course) JS! I started programming (self taught) at the age of 13. Originally, I came from the creative field ; I draw/sing/animate/make music.

I love drawing (I have been drawing all of my life). I play strategy games, I code and I do CTFs! I am also good at animation, making AMVs and image editing. My favourite game is Mindustry, followed by Flow Free and Sudoku. I love watching anime (I love Code Geass - I relate to Lelouch a lot) and I aspire to create my own anime!

CyberArtByte: My server full of bling and joy!!

Build your personal website from JSON file with React using @allamgr/portafolio library and publish it on your GitHub page?

Make a simple CRUD with Laravel 8