Nowadays, every back-end developer creates APIs, every QA engineer tests APIs, and every front-end developer uses APIs. Our business is becoming more complicated, and the number of APIs has increased enormously in recent years.

While working around APIs, the API documentation becomes the developing team’s center. However, no one like to write YAML documentation, although API-first has become popular.

It works, but it works not well enough.

A is the API designer, and he outputs a YAML file.

B is a Java developer who develops the API, so he has to implement it in the code and copy the URL and the parameters into Postman to debug it.

C is a QA engineer. To test the API, he must copy the URL and the parameters into Jmeter or another testing platform.

D is a front-end developer. Before the API is developed, he has to write mocking scripts for every field.

And that’s not the end. Once there is a new version and the API definition changes, everyone has to update every written request. If you miss one, there will be a bug.

Everyone copies and pastes and updates again and again, especially in agile teams. There is so much repeat work and so much wasted time.

These tools are not designed for teamwork.

This is why we decided to build a new API tool for teamworking.

Apidog is a better toolkit for developing APIs. You can design, debug, test, publish, and mock APIs in only one tool.

Now you can stop ctrl + C/V between API tools. Apidog connects everyone in API development. 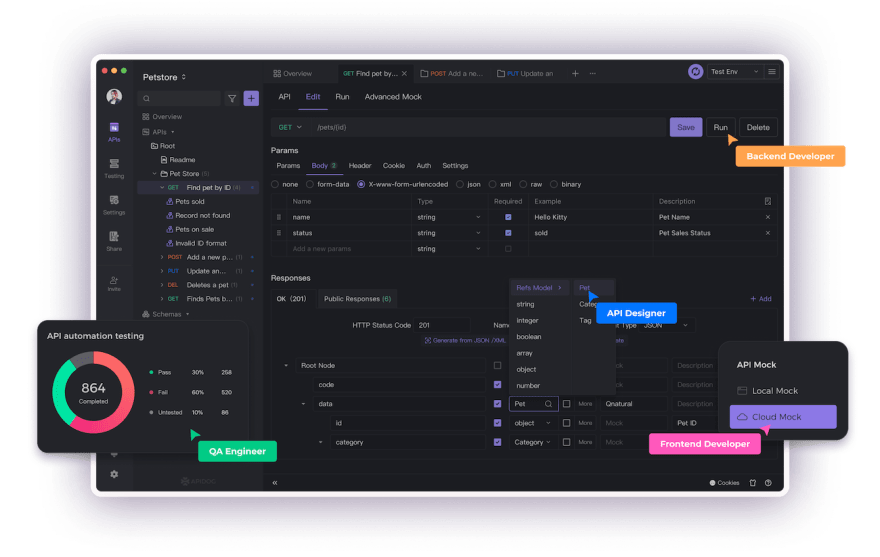 The API designer can design APIs in a powerful visual editor in which requests and responses can refer to schemas. You don’t need to write YAML.

The back-end developer can generate code from the APIs and directly send all kinds of HTTP requests in Apidog. Responses can be verified according to the definition of APIs while requests send automatically.

The QA engineer can import APIs into test cases. When APIs are modified, the cases will update automatically.

And when API is appropriately designed, documentation and mock data are generated automatically. You don’t need to write any mocking script.

It’s a fantastic tool. Everything is imported or generated so the developing team can focus on really important things.

We just launched it several days before. We know it’s not good enough now, but we’re evolving rapidly, and you’ll soon love it.

Once suspended, yukioikeda will not be able to comment or publish posts until their suspension is removed.

Once unsuspended, yukioikeda will be able to comment and publish posts again.

Once unpublished, all posts by yukioikeda will become hidden and only accessible to themselves.

If yukioikeda is not suspended, they can still re-publish their posts from their dashboard.

Once unpublished, this post will become invisible to the public and only accessible to YukioIkeda.

Thanks for keeping DEV Community 👩‍💻👨‍💻 safe. Here is what you can do to flag yukioikeda:

Unflagging yukioikeda will restore default visibility to their posts.