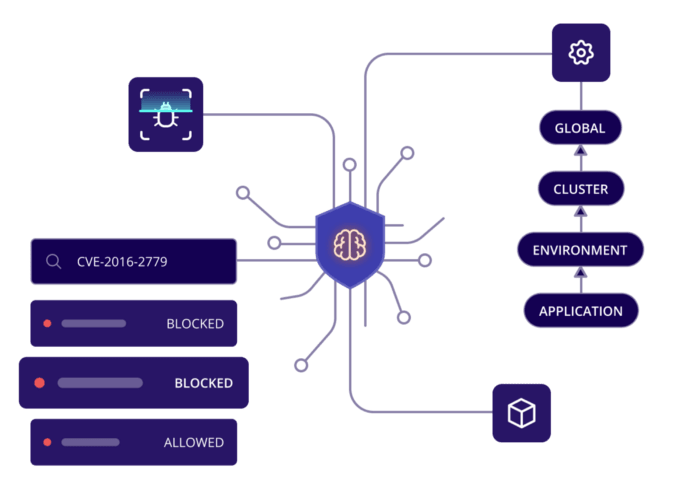 When organizations think of fostering a DevOps culture, building out an effective continuous integration (CI) and continuous deployment (CD) pipeline is usually brought up as the first step to success. Nowadays, infrastructure teams have a plethora of both open-source and licensed tools such as Jenkins, CircleCI, Github Actions, and ArgoCD to implement various CI/CD pipelines and deployment strategies. However, most of these tools rely on complex YAML templating to trigger the pipelines, which may discourage developers who simply want an easy way to build and deploy their application to cloud-native environments.

Devtron is an open-source software delivery workflow orchestrator for Kubernetes with a built-in CI/CD builder to address this issue. In this article, we’ll review how to configure some common CI/CD steps via Devtron.

In Devtron, CI pipelines can be created via a CI Workflow Editor (trigger from a code repository), linked to an existing pipeline (e.g. templates), or be integrated with an external provider via an incoming webhook. 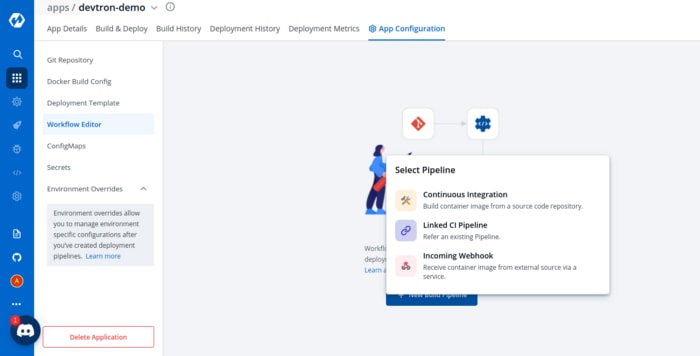 To create a new CI pipeline, choose the “Continuous integrations” option to open up the Workflow Editor:

Instead of specifying various branch types and triggers via a YAML file, developers can simply choose the source type (e.g. branch, PR, tag) or branch name to trigger the pipeline. Devtron provides three simple stages in the CI steps: 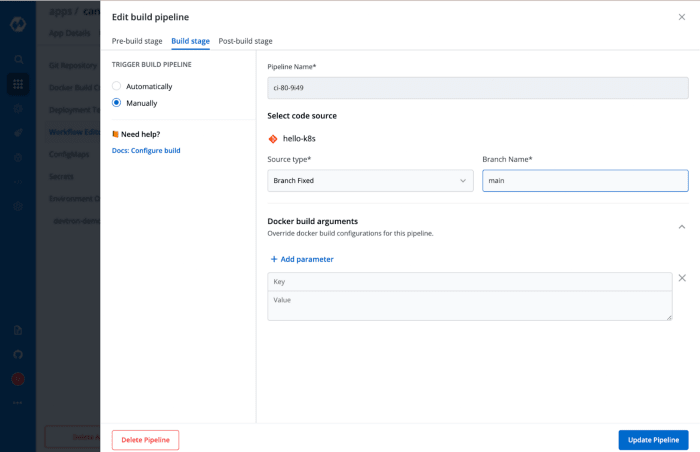 The build wizard guides through setting up each of these configuration parameters. If the team already has an existing CI template, developers can opt to link that pipeline or integrate with external tools if the team is migrating from legacy providers (e.g. Jenkins).

If the pipeline is set to trigger automatically, either commit to the branch or submit a PR to trigger the action. Alternatively, users can click on “Select Material” to trigger the builds.

Under the Build History tab, developers can also see vulnerabilities if that feature was enabled under the advanced options. This built-in integration is a nice way to avoid having to add in open-source scanners (e.g. Anchore, Clair, Trivy) or paid-tools (e.g. Jfrog Xray) manually. 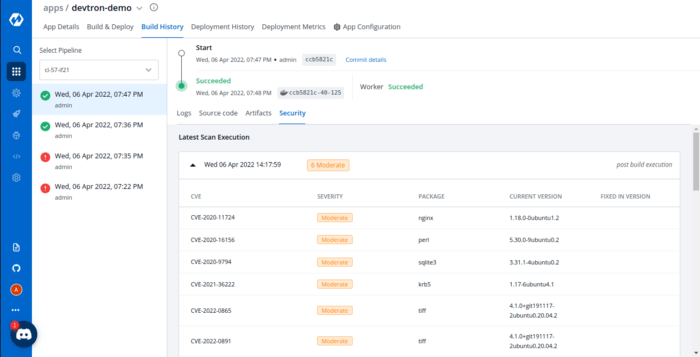 Once the CI pipeline is set, we can extend the pipeline to include the CD portion. Simply click on the (+) sign of the pipeline via the Workflow Editor and select the deployment environment (i.e. target namespace/cluster) and deployment strategy.

As with the CI portion, CD comes with three different stages:

Configure the pre-deployment stage to run automatically or manually with a config like the following. The following example shows using Flyway to manage database migrations. 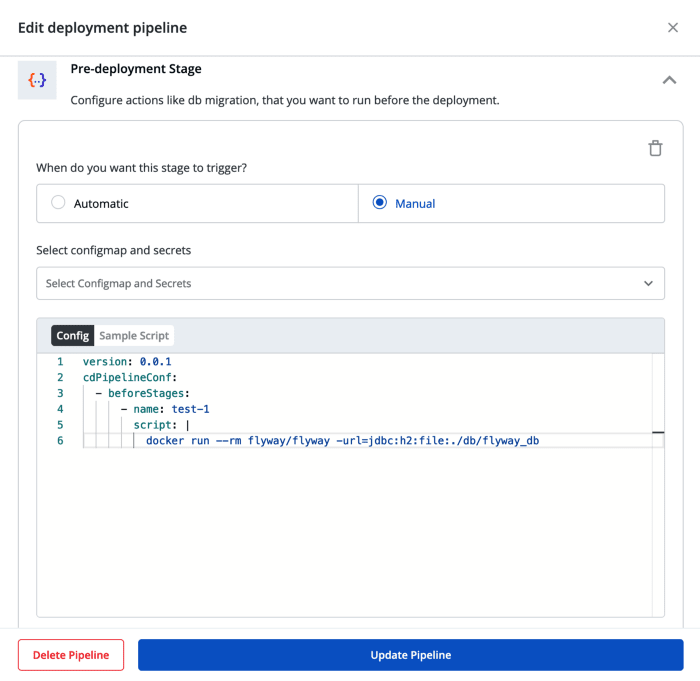 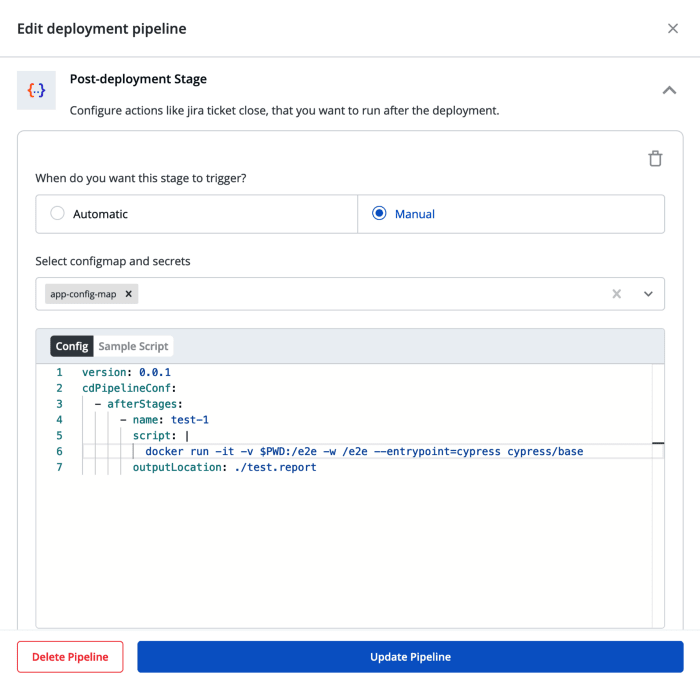 You can run smoke tests or end-to-end tests on lower environments after deploying. As shown above, you can use a node or cypress docker image to run tests:

These pipelines can be linked to sequentially deploy to multiple environments (e.g. dev → QA → UAT → prod).

With so many choices in the market today, most teams struggle to create a cohesive CI/CD experience without cobbling together a multitude of tools. While the flexibility of each of these tools provides tremendous value, for some teams, just setting up a simple pipeline is all that is needed. This is where Devtron can provide value in guiding developers through an intuitive widget to set up a pipeline that is ready for cloud-native applications.

Roadmap to becoming a DevOps Engineer with Resources

Once suspended, yitaek will not be able to comment or publish posts until their suspension is removed.

Once unsuspended, yitaek will be able to comment and publish posts again.

Once unpublished, all posts by yitaek will become hidden and only accessible to themselves.

If yitaek is not suspended, they can still re-publish their posts from their dashboard.

Once unpublished, this post will become invisible to the public and only accessible to Yitaek Hwang.

Thanks for keeping DEV Community safe. Here is what you can do to flag yitaek:

Unflagging yitaek will restore default visibility to their posts.