This post is crossposted article from Marp blog. Marp is an open-sourced desktop application to write slide deck in Markdown.

The first version of Marp was released at almost 3 years ago. At first, it was started from a simple tool for personal usage called "mdSlide". And now, Marp has been used by a lot of users who would recognize the real value of the presentation writer. Marp is amassed around 8,000 stars until now.

However, our headache brought from lacked maintainability to develop. We had received so many requests to the old Marp app, and it has to evolve to keep providing the best writing environment of presentation deck.

Today, I'm so excited to introduce the story of Marp Next! The full-rewritten Marp is not only just a writer. To be usable in various situations, we build a brand-new Marp ecosystem consisted of multiple modules. They are developed with JavaScript and TypeScript, and much more maintainable than the previous Marp.

Marp is the ecosystem to write your presentation with plain Markdown.

Our project is spread over many repos in order to focus on a limited scope per repository. Active projects are shown as emphasized in following list.

This repo (@marp-team/marp) is an entrance to the Marp family, and places our website.

Marp Next has two core components: Marpit framework and Marp Core. Tools by Marp ecosystem are usually based on these.

The skinny framework for creating slide deck from Markdown

Marpit /mɑːrpɪt/ is the skinny framework for creating slide deck from Markdown. It can transform Markdown and CSS theme(s) to slide deck composed of static HTML and CSS and create a web page convertible into slide PDF by printing.

Marpit is designed to output minimum assets for the slide deck. You can use the bare assets as a logicless slide deck, but mainly we expect to integrate output with other tools and applications.

In fact, this framework is created for using as the base of a core converter in the next version of Marp.

We have extended several features into markdown-it parser to support writing awesome slides, such as Directives and Slide backgrounds. Additional syntaxes place importance on a compatibility with general Markdown documents.

Marpit has the CSS theming system that…

Marpit is the skinny framework for creating HTML slide deck from Markdown. It is designed to convert Markdown into only minimum assets consisted of static HTML and CSS, and the output can convert into PDF slide deck by printing through Chrome / Chromium.

Marpit has created for using as the base of Marp ecosystem, but it is also independent framework. You may integrate Marpit's Markdown conversion with your tool, even if it's not Marp: reveal.js, WebSlides, and so on.

One of real-world use cases is MetaBake project. It provides Marpit integration from our early phase, to be easy to build web page with presentation style. (See example)

We had received many requests to the old Marp, about the additional syntax to help creating beautiful slide deck. On the other hand, we also have received a request that must respect Markdown syntax strictly. We have to deal with these contradicted issues.

Additional syntax provided by Marpit should never break CommonMark document. Thus, the result of rendering keeps looking nice even if you open the Marpit Markdown in a general Markdown editor. And you can even extend the additional syntax via markdown-it plugins if you need.

Marpit has the theming system to allow designing everything of slides by CSS.

The old Marp had the limited theming system and required deep diving to internal for customization: Build system, Sass, the logic of Marp app, and so on. So we had to create a brand-new theming system for easy customization of theme with only general CSS knowledge.

Marpit's it only requires a pure CSS, and no additional knowledges! You have only to focus styling HTML semantic elements. It means that you can create theme CSS from now!

In addition, Marpit has the pixel-perfect slide system like PowerPoint and Keynote. Theme creator never needs to worry about the responsive layout, and could provide design exactly as the author wanted with less effort.

Our unique idea is wrapping each slides by inline SVG. It might feel a bit strange, but makes many advantages.

Thanks to the power of SVG, we can keep a framework simple and maintainable. Marp Core is based on inline SVG slide by default.

Marp Core is a base converter for our projects extended from Marpit. In short, it is a battery-included Marpit.

Marpit only has bare essential features, so it might have not enough to start writing your deck. Marp Core provides the practical syntax, additional features, and built-in themes.

Many of the features are based on the old desktop app, and have improved to be suitable to Marpit. Of course, we added the new features for creating more beautiful deck.

Marp CLI is a CLI interface of Marpit and Marp Core converter. It's a Swiss-Army knife for Marp slide deck!

You can use it right now by running npx @marp-team/marp-cli if Node.js is installed.

Marp had a text editor originally, but you might think that want to write the slide deck with your favorite editor. If you use Vim, you would feel uncomfortable not to be usable Vim style key-binding. From now on, use Marp CLI's watch mode together with original Vim!

And Marp CLI can create really practicable static HTML as like as a presentation mode! It is powered by deep integration with Bespoke.js.

Thanks to Netlify, Now, and more hosting services, Marp CLI also brings a efficient Git management for creating slide deck just like GitPitch. I've created an example slide managed via GitHub repository as a good starter to help writing your slide deck. Try to use it via "Deploy to Netlify" button on README!

Marp Web is a Web interface of Marp presentation writer. It allows writing your slide deck as like as a traditional desktop app.

The current Marp Web is just a tech demo. We are planning to re-implement Marp Web based on well-known framework (like React) for building SPA.

It made some strong oppositions by users that is using Marp in offline when an idea of migration to web-based app is proposed for keeping maintainability of Marp. It was caused that a thinking of PWA was not general at that time.

And 2 years later, the time has come to use PWA! After the first access to https://web.marp.app/, Marp Web would be ready to use in both of online and offline. Online resources to use the web interface would be cached in your browser, and use them when network is offline. 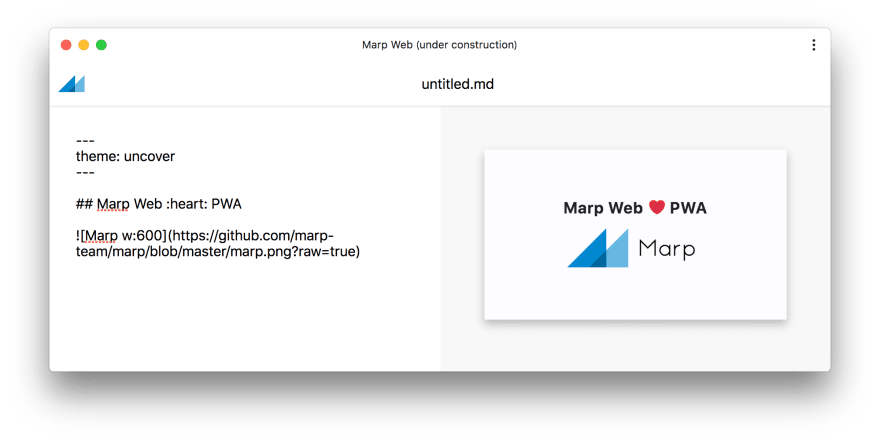 Use via any devices

By migrating to the web-based app, Marp will be able using in mobile device: Android and iOS. That's sure it's well suited to the tablet device like iPad. 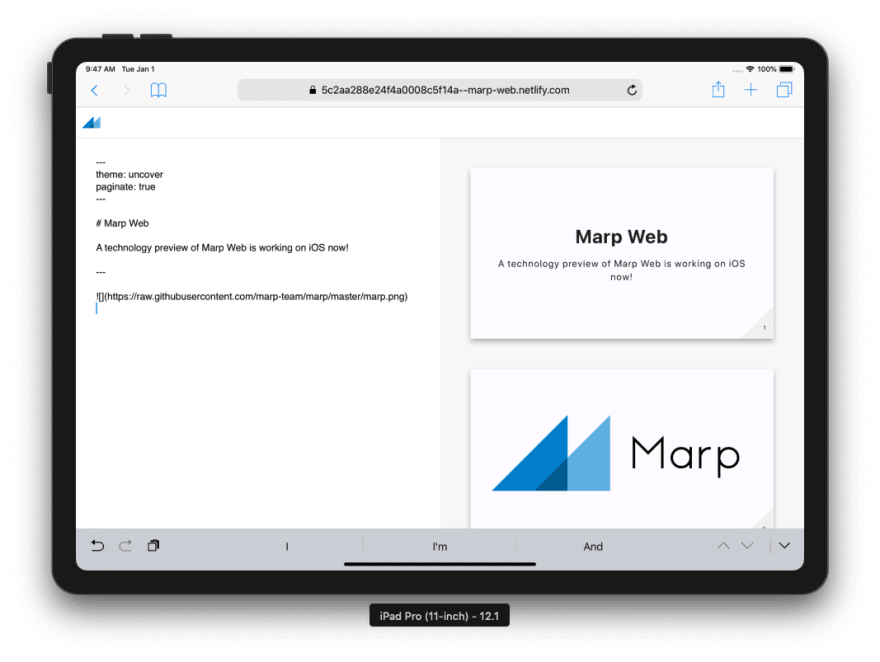 Marp Web would work also in Chrome OS well. Marp especially has many users in the field of education, and supporting Chrome OS that has large share in its field is meaningful.

We think Marp's important feature is a blazing-fast live preview. In the web-based app, realizing the same feature had many difficulties.

In currently published tech-demo, you can try Marp's really fast preview on the web. The preview applies as soon as typing, and it would not block your typing even if you have a large Markdown slides over than 100 pages.

The modulized Marp Core brought Marp integrations for some tools.

Marp for VS Code

Honestly, I don't think to want to make a new editor because there are many great Markdown editors in the world. I had been thinking it would be awesome if Marp could integrate with a something else powerful Markdown editor. And now, Marp can use in Visual Studio Code! 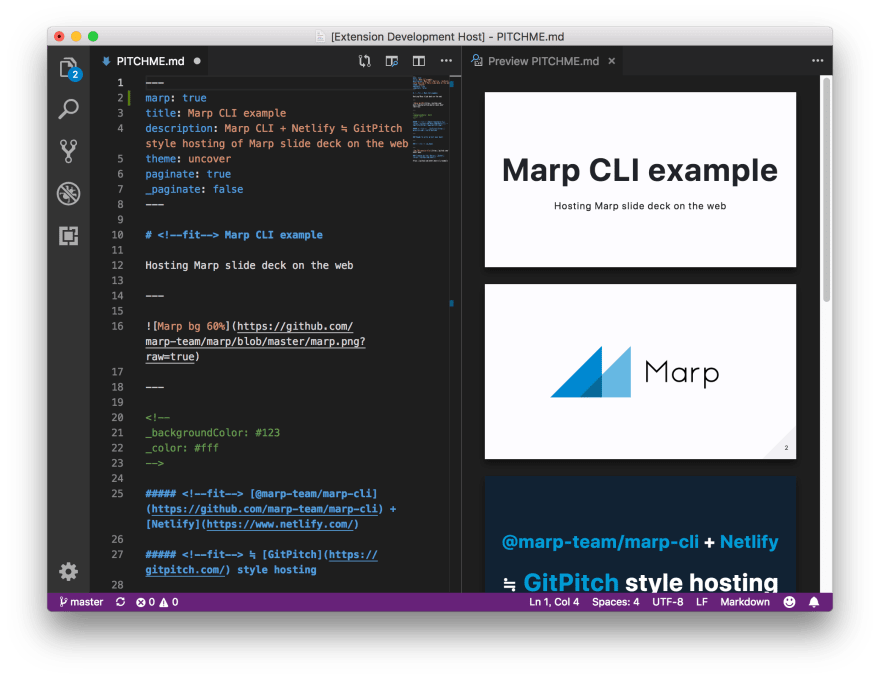 It was realized because VS Code is using the same Markdown engine (markdown-it) as Marpit framework. Of course you can export slides as PDF and HTML easily, powered by Marp CLI.

Marp's blazing fast live-preview is not only for ours! We provide Marp renderer component into React and Vue. Both Marp React and Marp Vue have supported the incremental update using framework's virtual DOM, and they are been easy to build your app.

Especially, Marp React would become to the base of the future of Marp Web.

If you are using an old Marp application, you should migrate to use Marp Next tools. I NEVER recommend continue to use the old Marp, because its maintainance has stopped 2 years ago and there is concern about security issues.

In future, the main interface would become to Marp Web. We have bet to PWA technology that has a lot of advantages. The desktop app is planned as "Marp Desktop" but it just may become a wrapper of Web interface.

I would stop publishing the old Marp and archive its repository if Marp Web has grown to become replacable the old Marp.

Your Markdown slides written in the old Marp syntax should rewrite to suit to the brand-new Marp ecosystem.

In a new Marp, we have reconsidered Markdown syntax based on feedback to the old Marp app. So, some syntaxs are losing compatibillity.

Marp Next just focuses to build the ecosystem for Markdown slide deck with pure open source. We expect to expand Marp productivity together with open source community.

We still have stood at the beginning of the brand-new ecosystem. Are you interested to Marp team and our ecosystem? We welcome to start your contribution! See our contributing guideline and get started!

PS. I've started Patreon and stood in a line of GitHub Sponsors. These are also good contribution if you want to help my working for open source.

How to resolve merge Conflict in git ?

Why You Shouldn’t Forget to Improve your R Programming

Once suspended, yhatt will not be able to comment or publish posts until their suspension is removed.

Once unsuspended, yhatt will be able to comment and publish posts again.

Once unpublished, all posts by yhatt will become hidden and only accessible to themselves.

If yhatt is not suspended, they can still re-publish their posts from their dashboard.

Once unpublished, this post will become invisible to the public and only accessible to Yuki Hattori.

Thanks for keeping DEV Community safe. Here is what you can do to flag yhatt:

Unflagging yhatt will restore default visibility to their posts.