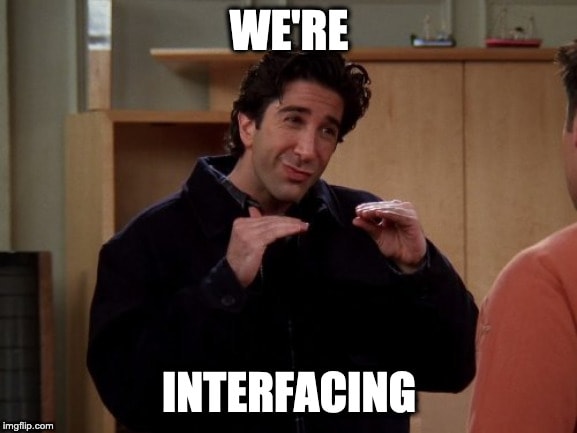 FROM time to time the question comes up in the OCaml/ReasonML communities:

Why do I need two files–an implementation file and an interface file–to define a module?

In this post I will try to answer this question.

(I know this is not always the exact question, but bear with me for a moment here.)

When do you want to expose the entire implementation? For me, the following cases make sense:

Although note that, if you expose an implementation, OCaml may not infer type parameter names as 'pretty' as you might have liked. E.g.,

You might want to give it a more descriptive type name e.g. 'ctx request -> 'ctx. Interfaces are useful for that as well.

So sometimes you do need a good old-fashioned interface file, if you want to:

But let's do a deeper dive into why specifically the interface/implementation file approach was chosen for OCaml/Reason. It goes back to OCaml's roots, and the source of its module interface/implementation design: Modula-2. Modula-2 was a descendant of Pascal, a teaching programming language which found application in industry with Turbo Pascal, Delphi, and others. Incidentally, the creator of Delphi, who is also the creator of C#, then went on to create TypeScript (which we will come to later in this post).

A dive into Modula-2

Anyway, Modula-2 had one big difference from Pascal–modules (as you may have guessed from the name):

Modules are the most important feature of Modula-2 over its predecessor Pascal making it very important for you to understand what they are and how they work. Fortunately for you, there are not too many things to learn about them and after you master them you will find many uses for them as you develop programs, and especially large programs.

Modula-2 came with a clever way to develop programs in a segregated way that would optimize their build times. The key concepts were:

As you can see, this scheme would ensure that, as programs got bigger and bigger, build times should stay as minimal as possible, if module interfaces are well-designed. In fact this is exactly what the documentation says:

Why all of this trouble?

It may not seem to be worth all of the extra trouble that the Modula-2 compiler and linker go through to do this checking but it is important for a large program. The information used in the definition part of the module is the type of information that should be well defined in the design stages of a programming project, and if well done, very few or no changes should be required during the coding phase of the project. Therefore it is expected that recompiling several definition modules should not happen very often. On the other hand, during the coding and debugging phase of the project, it is expected that many changes will be required in the implementation parts of the modules. Modula-2 allows this and still maintains very strong type checking across module boundaries to aid in detecting sometimes very subtle coding errors.

The above paragraph should be interpreted as a warning to you. If you find that you are constantly recompiling modules due to changes in the definition modules, you should have spent more time in the software design.

The 'checking' that it is talking about is explained earlier on that page. Basically, when an interface is compiled, one of its outputs is a 'key' that uniquely identifies the built interface, and checks that against the key that the dependency module says that it builds against. Think of it as a 'content-addressable hash' of the interface, used for strong typechecking during link time.

In fact this is almost exactly the same technique that OCaml uses to check modules during link time:

When OCaml builds a module, it takes a[n] MD5 hash over the interface and some of the internals. It also stores in the [dependent] module the MD5 hashes of any modules that it depends upon. At link time the MD5 hashes are compared, and the link is only allowed to proceed if they match.

As you can see, significant parts of OCaml's module design and linker behaviour are copied straight from Modula-2. Here's what the creator of OCaml has to say about it:

The “one compilation unit = one .mli interface file + one .ml implementation file” design goes back to Caml Light and was taken from Modula-2, Wirth’s excellent Pascal successor. As previously mentioned, it works great with separate compilation and parallel “make”.
...
OCaml combines this Modula-2 approach to compilation units with a Standard ML-like language of modules, featuring nested structures, functors, and multiple views of structures. The latter is a rarely-used but cool feature whereas a given structure can be constrained by several signatures to give different views on the implementation, e.g. one with full type abstraction for use by the general public and another with more transparent types for use by “friend” modules. Again, and perhaps even more than in Modula-2, it makes sense to separate structures (implementations) from signatures (interfaces) that control how much of the implementation is visible.

Prof. Leroy here also hints at a really cool technique that's available in the ML language family: modules can conform to multiple interfaces and expose different interfaces to different consumers. In other words–a module can wear many masks, depending on who is using it. I'll explore this technique more in a future post. Anyway, back to the drudgery of writing interfaces...

Interfaces in other languages

It turns out that other languages have been using separate interfaces (to lesser or greater extents), sometimes for a long time! For example:

The first example that springs to mind is the venerable C. It uses header (.h) files to declare types, functions, and other program components. These header files then get used by other implementation files/compilation units (.c) at link time. C also allows separate compilation when the implementation changes, and the header file doesn't. In fact in the C world a standard way of distributing software is shipping libraries with header files to declare the public API, along with compiled object files to actually link against.

In the Java world the standard advice is, 'Program to the interface, not the implementation'. This adds flexibility to the program, allowing easier change down the road when requirements change: https://softwareengineering.stackexchange.com/questions/150045/what-is-the-point-of-having-every-service-class-have-an-interface

In the gradually-typed languages we see cropping up today, interface files are very much in vogue, to 'ascribe' static types to dynamically-typed libraries:

You can see that OCaml/Reason's interface file precedent is copied almost wholesale.

Facing up to interfaces

Interfaces are a critical part of OCaml/Reason. In fact, they are almost universally recognized as a good idea and are spreading across more and more languages. Once you settle in to the OCaml mindset, you may find yourself enjoying the craft of software construction they enable!

React vs. Vue.js. An in-depth overview of their main differences.

All HackerRank Python Programming Solutions in one page