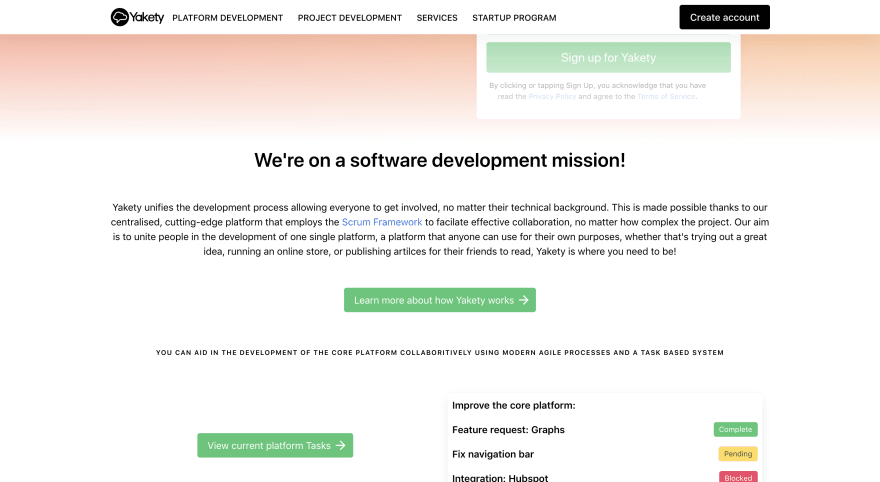 Hi everyone, I'm Matt. I want to let you all know about a platform I've developed: Yakety (to "yak" is to talk, the platform is about interaction..okay it was cheap, the domain was cheap).

I was tired of learning/ hearing about these "no-code" web builders, Shopify, Wix, Webflow, all of them. I've been a web developer for 10 years plus and the idea that you can sit an individual (even one that has some development experience), in front of a computer and they can create something of value in its entirity, alone, without assistance, is to me well, off-the-scale crazy. As far as I'm concerned, agencies appearing all over the place to build websites and systems using these "no-code" tools is testament to how far fetched the claim of "no-code" development really is!

That isn't to say that I thought it not possible to improve the environment in which we develop systems. I wanted to build a tool that takes a more realistic approach and I'm not talking about a slight change either, more a hard refresh!

After a lot of consideration, I decided that centralisation and collaboration * was the only serious route to improvement. Something akin to a halfway house between DIY and calling in the professionals. It struck me that, alongside the rise of no-code-site-builders, a lot has happened in the world of social media and interaction on the web in general, whether it be video calls, AI chatbots, pinging each other DMs etc. So my aim was to do something that combined those two fields, development and interaction, with a view to creating, wait for it... an interactive development platform. See what I did there? Nice.

I was also keen to give that idea some structure, so I looked to the likes of GitHub/ Lab, and incorporated some project management into the mix, something which I felt was vital to keeping everyone involved on the same page or at least giving them the chance to get to the page that everyone else is on. "Real" development is complex after all, even for developers, let alone people from a non-technical background (and I really want those people to be involved because it takes a special person to be gifted with development and systems design and marketing and, you get the idea). All people involved with web related work have a significant part to play, otherwise their job wouldn't exist.

So I basically took inspiration from (my lawyer has helped me with the wording of this sentence) a load of platforms and put together a melting pot of features to facilitate development (could I have just said that, okay possibly). The result is Yakety.

It's all a bit of a mess at the moment as you will see if you choose to visit the site, but (hopefully) you can see some potential in what I'm trying to achieve and come on board with me (and anyone else that chooses to sign up for that matter, that's the idea after all). Another, facet(?) of Yakety is that people are encouraged to develop the core platform, not just by improving the core codebase itself, but also by building their own projects atop of it in order to progress the overall capability of the platform and drive it to new territory. So whether you have a great idea for a bespoke, headless eCommerce store with Shopify or you want to create some cool web app that uses WebRTC, well instead of doing that alone, why not come and develop it with us? If you don't have a groundbreaking idea and just like the idea of developing a production grade platform alongside other developers and web professionals then that's great too.

I hope that's convinced you to try out the platform. I'll reiterate one last time that there is a lot to do all over the place, from marketing to SEO to data structures, you name it, involvement really is open to anyone. Thanks for reading and if you're interested in having involvement by all means register but also email me or jump on the live chat (contact page) and we can discuss where your skills fit with the development that is required.

*At this moment in time. I can foresee a situation where "the platform" generally speaking, develops to the point whereby "sub-platforms" are spawned and things become a lot more sci-fi, but for now yeah I'd say we're at the centralisation and collaboration stage!

Integrating an OpenLayers map in Vue.js, a step-by-step guide

Matt Anderson
I manage and develop Yakety.co.uk a platform on which people collaborate and innovative using a task based system, combined with no-code tools
Building a no-code platform, continued...
#laravel #vue #javascript #showdev
Using Dynamic Components And a Pattern I Devised Myself to Create a No Code Web Interface Builder
#vue #laravel #javascript #showdev