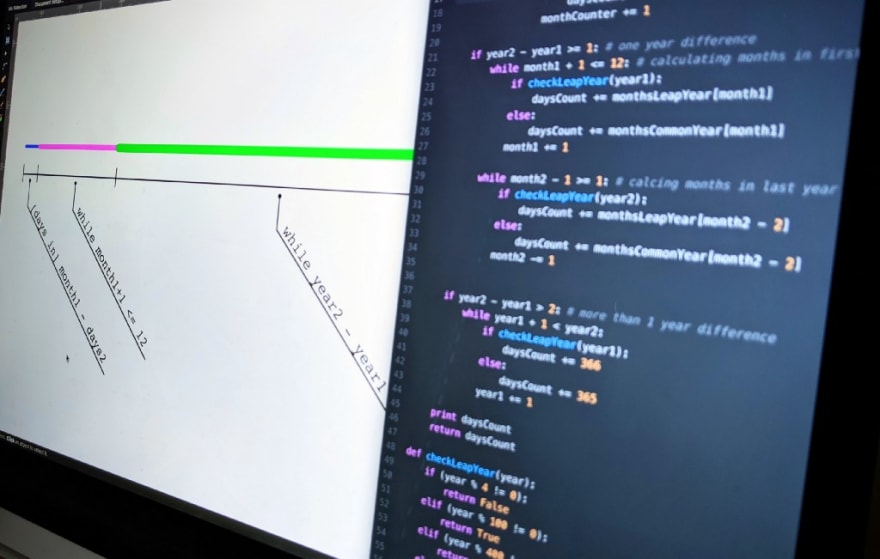 As part of Udacity’s Intro to Computer Science online course that I’m taking, I ran into this interesting exercise. The goal was to create a function that takes two dates as input and counts the days between them. The first date is always earlier than the second. My solution was probably not the most elegant and my code could be shorter and more efficient. The logic however was the important thing to understand, and that is also what I want to focus on in this article. This exercise was written in Python.

1st step — Counting the days inside each month

Here, daysCount is the general counter of the days between the two days, which I used throughout my function and eventually what the function returned. I assigned it to the day2 argument. I then subtracted the amount of days in month1 from day1 to get the count of days for the rest of month1. I used the list monthsCommonYear to get the exact amount of days in each month (I tend to leap years later on). This is the first because it occurs in every scenario.

However, if the input dates are for the same year but the months are different, the function goes to the next step.

Here, if the time between the input years is 1 year or more, I add whole months to my daysCount. for year1, I add the next month (month1+1) till the end of the year. For year2, I count months from (month2–1) till the beginning of the year. I take care not to count the days in the months I counted previously. I also take care to count the correct months in my monthsCommonYear list, knowing my arguments can go from 1 to 12, but my list index goes from 0 to 11.

The last step is pretty straightforward. I add to my daysCount the days in each year between year1 and year2. The function eventually returns daysCount.

This exercise had an additional challenge, which made it even more interesting: the function has to tell if a year is common or leap and calculate the days accordingly. It was actually easier than I thought. The Udacity instructions linked to a Wikipedia article that offered the exact algorithm I needed and that was easily converted to a function like the one below.

The comments in this snippet are taken straight from the description in Wikipedia.

I used this function in two types of scenarios:

I called checkLeapYear() 5 times in my function: 4 times to choose which month list to use (common or leap) and 1 time to add the years to my count. That’s why I preferred checkLeapYear() to return a boolean instead of the number of days in each year (365 or 366).

Here’s the first part of the function, updated to calculate leap years. Notice I added another list for leap year months (the only difference is 29 days in February).

The code I wrote for this exercise is long and encumbered, and perhaps later in my studies I will refactor it to something shorter and more efficient. The important thing for me here was exploring the logic behind the solution, rather than the way it was implemented.

What are the hottest dbt Repositories you should star on Github 2022? - Here are mine.

YairMorr
I'm a VFX artist and a Frontend developer!
How I learned a Python trick from a JavaScript book
#scopes #maya #python #javascript

Once suspended, yairmorr will not be able to comment or publish posts until their suspension is removed.

Once unsuspended, yairmorr will be able to comment and publish posts again.

Once unpublished, all posts by yairmorr will become hidden and only accessible to themselves.

If yairmorr is not suspended, they can still re-publish their posts from their dashboard.