Hey 👋 ! Today we are going to talk about Pub/Sub a lot but not much about how protocol buffers fit into it (as this will be the subject of another article in this series). Still, I want to keep this article in this protobuf-related series as these two subjects are closely related.

Stream processing is the practice of taking action on a series of data at the time the data is created, Pub/Sub solutions are an implementation of that.

The Pub/Sub pattern, which stands for Publisher/Subscriber, consists of an architecture that aims at allowing services to communicate asynchronously with each other (e.g. without having to wait for one another's responses) using a messaging system.

The asynchronicity of this system lies mainly in the fact that publishers are sources of asynchronous events: these events can arise at any point in time, if they arise at all. In this pattern, the GCP plays a buffering role between the publishers and the subscribers, which are synced to these events.

Using this pattern with the Google Cloud Platform means that the GCP will act as a big mailbox that will permit this aynschronous communication between services. This has the advantage of decoupling the sender and the receiver apps in a system.

For instance, if subscribing services are down for some time and go back up again, they can catch up with the stream of missed messages without the publisher apps having to care about it at all thanks to the big GCP mailbox.

Google Pub/Sub is serverless as it does not require to maintain or provision compute resources. The GCP is not the only platform that implements Pub/Sub, Azure and AWS implement it as well, but that's beyond the scope of this article. 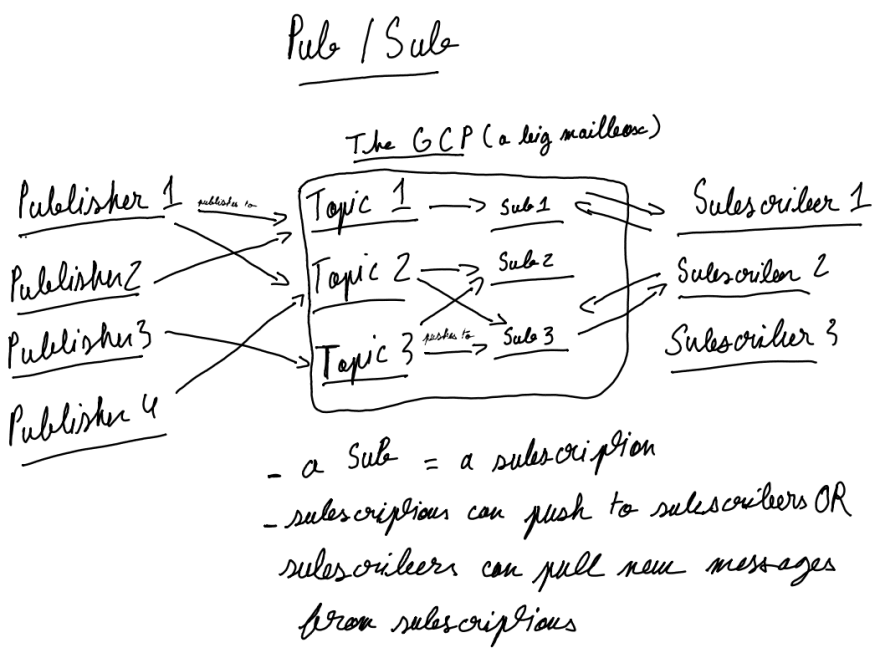 Goggle Pub/Sub architecture has the advantage of offering global replication, high availability, and auto scaling, it can be scaled across various dimensions:

Subscriptions can be of 2 types:

Pull subscriptions may be chosen if you want to control the throughput of the data you may receive from a subscription at the subscriber service level, with rate limiting for instance.

Push subscriptions are great if you need automatic fast and guaranteed delivery of incoming messages to the subscriber services.

When Pub/Sub pushes a message to a subscriber, the subscriber needs to acknowledge receipt within a specific deadline otherwise Pub/Sub will retry delivery; if the subscriber estimates that it needs some time to process the message, it can send back to Pub/Sub a request to modify the acknowledgment deadline.

THE important thing to understand about subscriptions and subscribers

This reliability is reinforced by the fact GCP Pub/Sub topics are persisted in internal storage (a topic message store) and are then replicated and sharded for you out of the box until delivered and acknowledged through different subscriptions.

Be mindful of that when you're making architectural decisions. It really depends on how your system is supposed to work, but you could for instance create one subscription for each subscriber app' to allow all listening services to receive all the messages published on a given topic separately.

Again, this is certainly not the only option and you may organize that as you and your business see fit.

All these CLI commands can also be made programmatically using one of the many GCP Pub/Sub client libraries in the language of your choice.

That's it for my Pub/Sub notes, hope they may prove to be useful to you !👋

How to Ace GCP Associate Cloud Engineer Certification in 2022?

Kafka on the Serverless Shore: Building event-driven applications with Kafka

How to prepare for the GCP Professional Data Engineer certification

yactouat
Developer driven by curiosity, positivity, and a can-do attitude; I like to code full stack projects with various technologies.
Preaching 'Clean Code' is Lowering the Quality of Developers
#webdev #watercooler #unpopularopinion #discuss
How many programming languages do you know?
#beginners #programming #discuss #career
Github copilot is out of beta, would you use it ?
#discuss #programming #productivity #github