Testing is hard and not everyone likes to spend their time writing unit tests when they could be building shiny new features.

While almost every developer understands the value of testing their code, most of us fall prey of laziness in the face of approaching deadlines and the prospect of more exciting work.

In this post, let’s understand why unit tests serve as the backbone of successful products and learn a new way of writing tests that is much simpler, intuitive and appealing.

Since I mostly work with Android applications. I’ll let you in on a little secret. More than half of the code bases you will come across will have little to no tests. Not just the crappy ones, but sometimes products with thousands of users.

This is often due to the complex and dull nature of old school JUnit based testing. Not only the process is quite boring, it also requires a lot of repetitive boilerplate code to be written for even the simplest scenarios, making testing a very time-consuming process.

Obviously, when you are in a rush to take the product out as soon as possible, testing becomes the least desirable practice.

More often than not, the end result is that the project becomes unmaintainable within a year. I have seen organizations rewriting already published products only because the code base has become unmaintainable due to spaghetti code that is rotten with bugs.

Obviously this is not a desirable situation. Testing your code for bugs and architectural flaws from the beginning solidifies your product to be manageable in the longer run.

Testing As You Go

Laying the foundations of your project with extensive testing is not a new idea. Behavior Driven Development has been around for decades.

The practice is to turn feature specifications (or user stories) into a set of unit tests and then writing code that satisfies those specs via passing tests.

This results in co-development of both your features and their tests side by side. Coupled with a Continuous Integration solution, this setup almost guarantees that you will never have any regression bugs.

Specification Based Testing In Practice

Cucumber is the most widely used BDD testing framework right now. It provides a plain language parser called Gherkin which can be used to write tests in plain English that non-programmers can also understand. The framework turns these specifications into acceptance tests which also serves as the documentation for each feature. Here is what a test is written in Gherkin looks like:

Neat! Isn’t it? This spec results in unit tests that run with Cucumber. Since this post is not about Cucumber, I won’t go into the implementation details. You can visit this tutorial for the full tutorial on BDD style testing with Cucumber. I used the same article to borrow the above example.

JUnit is an industry-standard at this point for all things Java. It has ruled the Java development for decades now and it works. But since it was built for Java, it brings with it most of the common pitfalls of Java-based technologies that feel backward, especially in the world of modern programming languages like Kotlin, JavaScript and Python.

Having said that, writing all styles of tests are entirely possible with JUnit. Mockito provides a BDD style extension in its core library that allows you to do similar Give, When, Then style testing within JUnit test cases.

Let’s take a look at some of the problems associated with it and why I believe vanilla JUnit is not a good combination for a powerful language like Kotlin:

Like everything in Java, JUnit is also quite verbose. This results in too much repetition of similar contents with a slight change of logic to test different scenarios.

Of course, you can stuff in all your assertions in one test at the cost of readability. However, a good test is supposed to be granular i.e. targeting one case per test.

Also, your test code is guaranteed to grow as your project gets bigger and at some point, your test code will surpass your application code. If you want to look at examples of this, try looking into the source code of any popular open-source projects such as RxJava, Retrofit, OkHttp, Picasso, etc. Almost all of them have 1.5x to 2x more test code compared to their business logic.

If you are like me, then one of the first things that you may have done while switching to Kotlin was to change your long JUnit test names like fun onTouchOutside_shouldDismissDialogAndResumeStreaming() with back tick notation. While a big improvement, it gave us a license to go wild with it in our attempts to provide more contextual information about each test case. So now our test case has evolved into something like this: fun `on touch outside, dismiss the dialog and resume streaming the paused song` ()

The real issue here is that these names are not enough to provide full context about the test. Unless you are willing to write an entire paragraph to define the pre and post conditions for the scenario.

Another problem here is with the organization of test cases. Most of the test cases have some shared code that can be logically structured into a hierarchy. However, because JUnit only allows you to write tests in the form of class methods. So you end up writing more tests, more code but with less context about the overall theme of the current group of tests.

A Better Way To Write Tests

The reason behind giving you a taste of Cucumber BDD was to show what it would be like to have such idiomatic tests.

Let’s define a set of specification that we want to build and test. We will be using two libraries Kotlintest and Mockk to help us write tests.

Let’s build a grade calculator that tells you your grade based on the marks you obtained. Here are the rules for grading:

The first dependency is Kotlintest which is a testing library built on top of JUnit. It takes advantage of Kotlin’s DSL capabilities to support various type of testing styles.

Mockk is a Kotlin-based mocking library with a very clean syntax that blends really well with Kotlintest’s specs. It also provides a much more flexible API and a much wider set of feature compared to Mockito or Powermock.

Let’s start by creating an empty GradeCalculator class and converting our specifications into a Spec.

This does not quite look like our traditional JUnit test. So let’s break it down and understand bit by bit:

Next, let's add some functionality to the GradeCalculator class.

Here I added a totalMarks field which we mock in our test. This value is used in the getPercentage method to calculate the percentage between total and obtained marks.

Finally, the getGrade calculates the grade by comparing the calculated percentage with different ranges.

You can build this class in a TDD fashion by running the tests first and adding the functionality to make the failing tests pass one by one. I believe the end result would still be somewhat similar.

In the end, let's add some assertions to test the specifications we just wrote. The final implementation would look something like this:

I discussed above that JUnit tests lack contextual information and proper grouping of co-related tests. You can see how every test in the spec has a hierarchy which can be used to compose complex cases.

Furthermore, for this particular style of testing, kotlintest provides an additional And block to allow you to create even more complex tests without losing contextual information. For example, you may want to construct a test like this:

Finally, not just the tests are well organized, the test results in Android Studio have that nested style too. Here’s the result of our tests in the IDE: 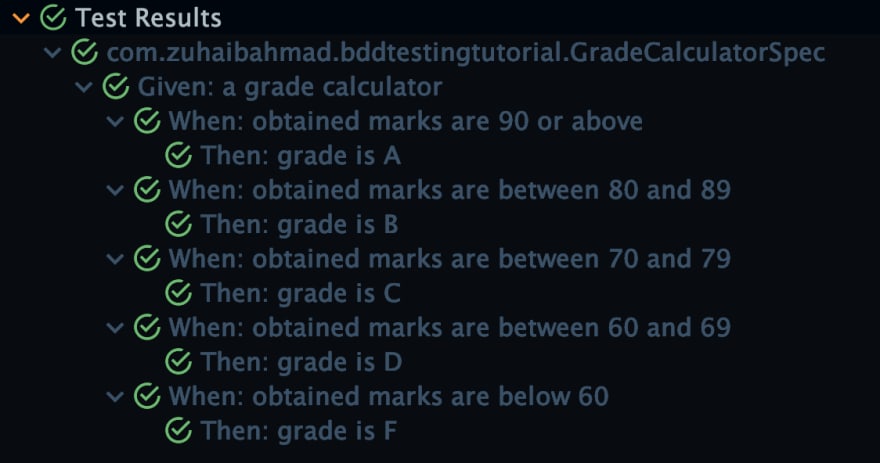 You can find complete source code for this post here

How to Use vMix with Ant Media Server? – Easy Guide

Functions should have same level of abstraction