After many years when Intel and AMD dominate the world of workstation CPUs with x86 chips there seems a new era to come. The era of ARM.

Apple has introduced its ARM-based Apple Silicon M1 chip in late 2020 and the first benchmarks were for a lot of people too good to be true.

Official benchmarks are great to get some overview about CPU capabilities but they cannot answer my question as they are mostly based on rendering video or running demanding games which is a different kind of task.
Also it would not be fair to do the comparison right away at the end of 2020 as the Android ecosystem was not compatible with Apple Silicon chips natively and the tools were running through the Rosetta 2 application compatibility layer.

Now, after a few months since Apple Silicon launch there are first OpenJDK builds with native support and Gradle supports it natively since version 7.0. That's all we need to make an Android project build times comparison!

We have 4 competitors in the test:

The test is to be done on 3 selected Android projects:

Main questions to ask are:

Here are the average build times for competitors on the test projects. Some were run both with Gradle 7.0 with native Apple Silicon support and Gradle 6.8 that uses Rosetta 2 compatibility layer. 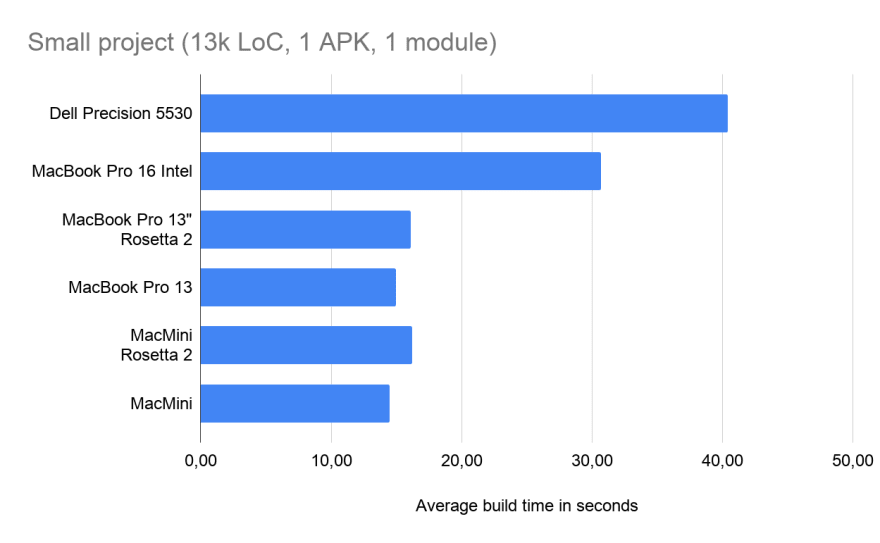 Small, single-module project cannot be parallelized much but the M1 chip did the job in half the time then Intel i7 chip in MacBook Pro 16".
Gradle 7.0 with native Apple Silicon support is certainly faster than Gradle 6.8 that uses Rosetta 2, but the difference is almost negligible. 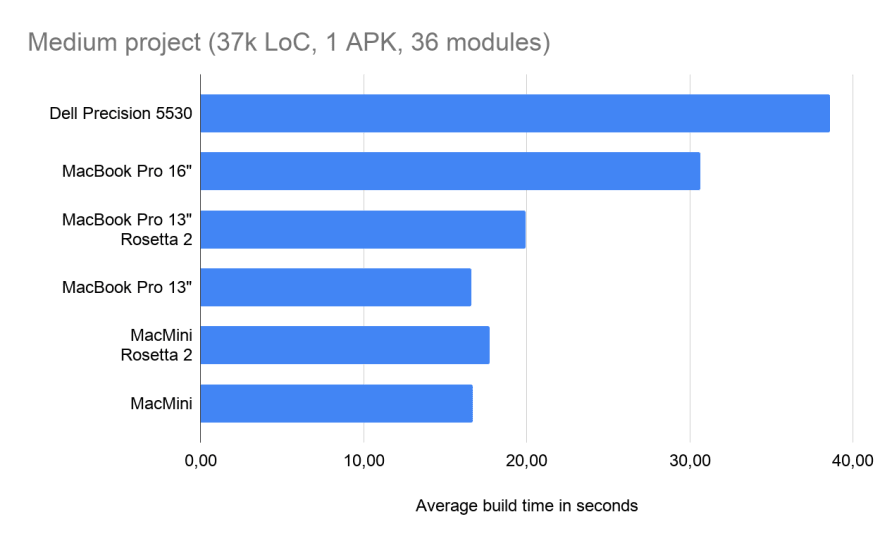 Similar results are to be seen on medium and well modularized project. Dell's and Mac's 12 threads Intel i7 chip were still too slow against M1. 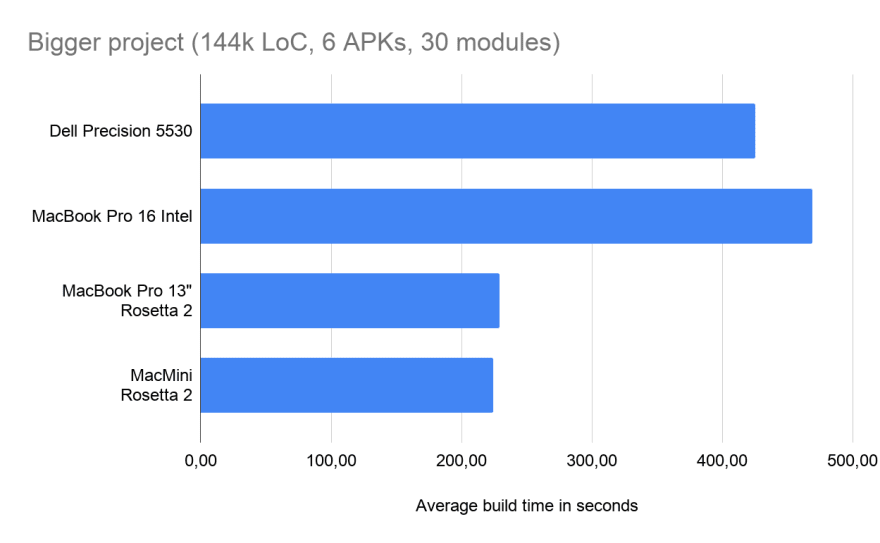 On bigger project the difference in speed isn't so enormous but still the M1 outclassed the rivals. In this run the MacBook Pro 16" did a worse job than the technically slower Dell Precision probably due to smaller RAM.

I leave the results evaluation on each of you but let me just try to answer the main questions:

1. Will MacBook Pro 13" with M1 chip beat the bigger Intel-based brother?
Yes, no doubt about it!

2. Will MacMini beat the MacBook Pro 13" with the same HW equipment thanks to its desktop nature and possible more power or better cooling?
No, this test didn't show any difference in performance of those two. Maybe when an IDE and Emulator will be running for 8 hours a day the MacMini might be more stable but that would be a more subjective observation.

4. Will 16 GB of RAM be enough even for bigger projects?
Yes-ish. Macs with M1 chip were fine with 16 GB RAM during the test but the older MacBook Pro 16" seems to have a problem on the bigger project. Also, IDE and Emulator were off during the test so in real-world use it might be a little limiting. One way or another, the power of M1 would overcome this limitation.

What should I do if HMS Core (APK) cannot be updated (error code 102)?

How to debug Flutter apps over Wi-Fi(without root)

How to use App Linking on non-Huawei phones?