In August 2020, Ansible issued its first release since the developers split the core functionality from the vast majority of its modules and plugins. A few basic Ansible modules remain part of core Ansible - modules for templating configuration files, managing services, and installing packages. All the other modules and plugins found their homes in dedicated Ansible collections.

This article offers a quick look at Ansible collections in general and - especially - how to recognize high-quality ones.

What are Ansible collections?

At its core, an Ansible collection is a collection (pun intended) of related modules and plugins that you can manage independently from Ansible’s core engine. For example, the Sensu Go Ansible collection contains Ansible content for managing all aspects of Sensu Go. It includes Ansible roles for installing Sensu Go components and modules for creating, updating, and deleting monitoring resources. Another example is the Sops Ansible collection that integrates Mozilla’s Secret Operations editor with Ansible.

Ansible comes bundled with the ansible-galaxy tool for installing collections. Once you know what Ansible collection you want to install, things are relatively straightforward: Run the installation command listed on the Ansible Galaxy page. Ansible takes care of downloading and installing it. For example:

But finding the Ansible collection you need and vetting its contents are the harder parts.

How to select an Ansible collection

In the old times of monolithic Ansible, using third-party Ansible modules and plugins was not for the faint of heart. As a result, most users used whatever came bundled with their version of Ansible.

The ability to install Ansible collections offered a lot more control over the content you use in your Ansible playbooks. You can install the core Ansible engine and then equip it with the modules, plugins, and roles you need. But, as always, with great power comes great responsibility.

Now users are solely responsible for the quality of content they use to build Ansible playbooks. But how can you separate high-quality content from the rest? Here are five things to check when evaluating an Ansible collection.

Another essential part of the documentation is a detailed module, plugin, and role reference guide. Collection authors do not always publish those guides on the internet, but they should always be accessible with the ansible-doc tool.

An Ansible playbook should serve as a human-readable description of the desired state. To achieve that, modules from the Ansible collection under evaluation should have a consistent user interface and descriptive parameter names.

Probably the most critical property to look for is the result. Ansible modules and roles that enforce a state are much easier to use than their action-executing counterparts. This is because you can update your Ansible playbook and rerun it without risking a significant breakage.

You should also expect support for check mode, which simulates the change without making it. If you combine check mode with state enforcement, you get a configuration drift detector for free.

A robustness check is a bit harder to perform if you’ve never developed an Ansible module or role before. Checking the continuous integration/continuous delivery (CI/CD) configuration files should give you a general idea of what is tested. Finding ansible-test and molecule commands in the test suite is an excellent sign.

During your evaluation, you should also take a look at the issue tracker and development activity. Finding old issues with no response from maintainers is one sign of a poorly maintained Ansible collection.

Judging the health of a collection by the development activity is a bit trickier. No commits in the last year are a sure sign of an unmaintained Ansible collection because the Ansible ecosystem is developing rapidly. Seeing a few commits per month is usually a sign of a mature project that receives timely updates.

Evaluating Ansible collections is not an entirely trivial task. Hopefully, these tips will make your selection process somewhat more manageable. It does take time and effort to find the appropriate content for your use case. But with automation becoming an integral part of almost everything, all this effort is well-spent and will pay dividends in the future.

If you are thinking about creating your own Ansible Collection, you can download a free e-book from Steampunk packed full of advice on building and maintaining high-quality Ansible integrations. 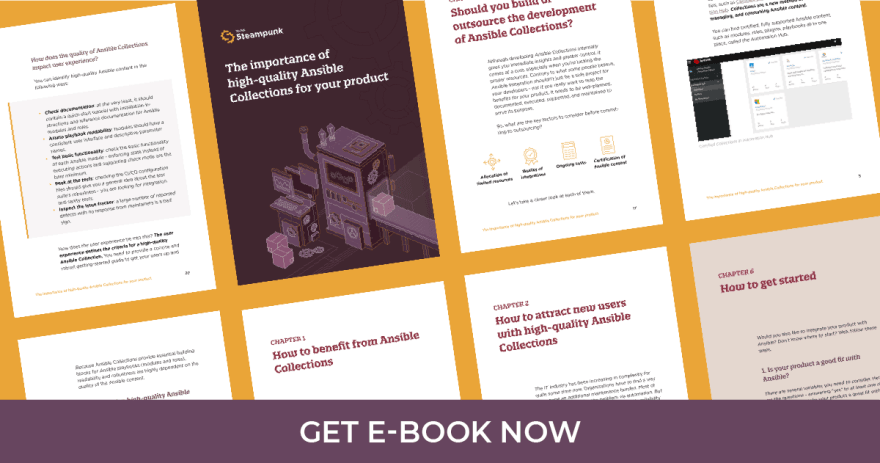 Releasing Software Is Hard! Is it?

Parallel Provisioning with Vagrant and Ansible