There is a new and you could say shinning web framework in the works – Pyscript. Pyscript is an open-source web framework that allows users to create and implement rich Python applications in the web browser using HTML’s interface with essential web tools to bring an easy web experience to users.

The Pyscript web framework hopes to bring the capabilities of the popular Python programming language to the web development infrastructure – by running python code in the browser. 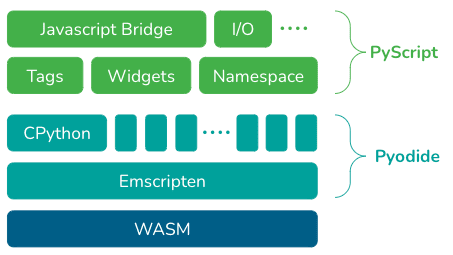 Pyscript combines many different web technologies and frameworks that make it easy to implement. It is built on the power of Pyodide, WASM, and other web programming languages. Some of the foundational programminglanguages include Typescript, JavaScript, TypeScript, Python, Makefile and Svelte.

The python framework was announced at the PyCon US 2022. it is still very much under development (presently in alpha) by a team at Anaconda Inc. This is the organization behind the development of the popular python development and management environment – Anaconda.

Anyone familiar with foundational web development would know that web-based programming languages like PHP and JavaScript are normally intertwined with the web markup language (HTML).

This is the route that Pyscript programming would also follow.

It is intended to be combined with HTML codes, and also it would have the ability to call JavaScript libraries along with other web development libraries.

One benefit that this framework would bring is that it would enable web developers to access the power that the python programming language offers and in like manner give data scientists (who are major users of the python language) to create front-end implementations of their application easily.

To get a feel of the web framework, the appropriate pyscript files can be imported into an HTML using the following syntax:

You can play with it, for now, *to learn how it works. BUT DO NOT USE IT IN ANY PRODUCTION DEVELOPMENT. * This is because here many known issues have been identified and addressed to improve it. ** **

You can check out some developed examples using the framework here.

Though it is still heavily under development, it would be very pleasing to see it being further developed and more features being integrated; as it grows into a valuable robust tool in the web development community and field.

The post Facts You Should know About Pyscript: A web Development Framework appeared first on Foss Naija.

Have you seen this sexy button?

Update your GitHub profile with your chess.com games with a GitHub Action

Once suspended, xeroxism will not be able to comment or publish posts until their suspension is removed.

Once unsuspended, xeroxism will be able to comment and publish posts again.

Once unpublished, all posts by xeroxism will become hidden and only accessible to themselves.

If xeroxism is not suspended, they can still re-publish their posts from their dashboard.

Once unpublished, this post will become invisible to the public and only accessible to Alexander Omorokunwa .

Thanks for keeping DEV Community safe. Here is what you can do to flag xeroxism:

Unflagging xeroxism will restore default visibility to their posts.