Notice: There's an on-going discussion in support of the underlying Service Provider standard. Join the effort!

For over 12 years now, I have been working with various engines and frameworks, from CodeIgniter to Magento, but the greatest amount of time I have spent on projects related to WordPress. One of my biggest passions is re-usability, and so by far, I have spent most of my WordPress time on plugins, working with companies and teams to produce high-quality, customizable solutions.

Of course, there's no quality and re-usability without interoperability, and without design principles like SOLID or DDD. That's why they are my other great passion. I have been in trouble countless times for pushing for better standards and refusing to write low-quality code.

In PHP, when we think "interoperability", we think "FIG". And I have been a fan of FIG for a long time, even making it into a workgroup. Although I don't always like or agree with everything FIG does, it is an organization that takes interop standards very seriously. And we need interop standards.

In fact, we need them yesterday, and there simply aren't enough resources at FIG to provide for everyone. At the same time, FIG is quite a rigid organization (for good reason), which is why I created Dhii: to serve as a more flexible source of standards and compliant implementations, providing a testing ground for ideas and contributing to interoperability in more niche areas. For example, it is not uncommon to use a __toString() method for converting objects to their string representation, but for some reason, PHP is missing a native interface that would allow us to type-hint (or at least document) that a stringable object is an allowed type. The same goes for many other things, like ID-aware objects, objects with human-readable data like labels and captions, templates and other output-related objects, and many more. At Dhii, we address these concerns in hope that our solutions would help packages to be more interoperable.

One of these concerns is modularity. Many systems lack the notion of modules. WordPress allows for plugins, themes, drop-ins, etc., but nothing unifies them. I describe the problem and solutions in detail in my article "Package Management in WordPress". Other systems, like Symfony, support modules, but they are coupled to those systems, and therefore cannot be used anywhere else. Moreover, if your WordPress plugin needs to be modular itself — perhaps because you want to support add-ons that would extend its core functionality — there is no available standard in WordPress or anywhere else to make that possible.

With all the interop standards that already exist and have yet to come, why not have modules that can work in any system, provided that it has a compatible loader? Wouldn't it be great if a piece of functionality that addresses a business problem in WordPress could also be used in Drupal? Why do we have to write the same thing so many times, over and over again? I cannot even imagine how much time and money gets spent on re-inventing the wheel every day.

Meet dhii/module-interface: a standard for cross-platform modules. Dependent on a FIG experimental service-provider standard, it allows you to quickly and easily define a cross-platform module for use in any system with a compatible loader. How you program the module internals, including the level of granularity for declared services, is entirely up to you; but when done correctly, it automatically allows every individual part of your module to be infinitely extendable from outside. One module can completely change the way another module works. And yet, the application comprised of these modules is ultimately in control. Here's how this is achieved.

Note: If you don't understand why you would want cross-platform modules with easily changeable components, you may want to learn about Separation of Concerns.

In most cases, a modular application includes some entry points which can be used by modules to interrupt or extend the flow of the application. In such systems, modules are made for the application, and can change only the aspects open for change by the application or other modules. Often, this is done via an event mechanism: the application would trigger an event which can be handled by module handlers; those would change some parameters of the event; these parameters would then be returned and used by the original code. For example, WordPress uses hooks to de-couple plugin code from its internal flow. These are some of the problems such a mechanism suffers from:

Even if a system does not use events, but relies on some other mechanism, such as service definitions, the module standard would be specific to that system, and you would not be able to re-use the same module somewhere else.

Ideally, the application would have no more than the following responsibilities: 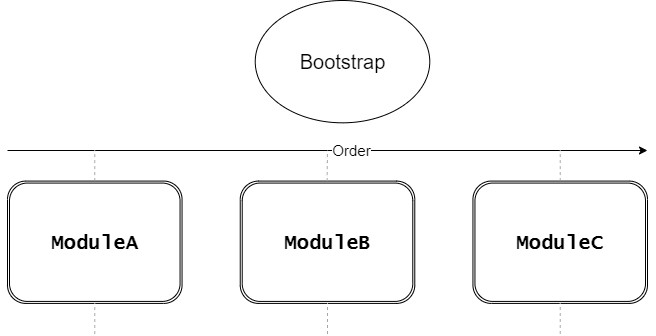 One of the main responsibilities of the application is loading the selected modules, and a crucial part of that is determining the module load order. This order has a direct effect on the services that will effectively be used in the application. The module standard relies on service-provider implementations exposed by the modules. These Service Providers expose service definitions in two ways:

And here is how the modules are loaded by a compliant system:

This creates an extremely simple yet powerful mechanism for modules to influence other modules in a way that is completely predictable, with one DI container being the single source of truth for all configuration.

Here is an illustration of how service definitions would resolve according to the rules described above.

The following can be gathered from this illustration:

Out of the box, there is complete customizability and flexibility, without sacrificing centralization and control. Modules are self-contained, and depend on outside services through the DI container.

So, how would one start working in a modular system like this, and what would it take to make a simple application?

That's all; barring comments, imports, and whitespace, all it takes to have a simple modular system is 20 lines of code. Module classes in this example get autoloaded like any other class.

A module may provide services, consume services, or both. Let's create a simple module.

Here, we have a module that declares a service my_service of type MyPackage\MyService and consumes it. That service depends on a service other_service, and because it is not declared in this module, it is a dependency. The ServiceProvider class was omitted here for brevity, because implementations are extremely simple, and can even be easily created in the same package, including anonymously.

The possibilities opened up by such an architecture are limitless, including:

Have Yourself a Model View Controller

Show All Posts Associated With a Category in Laravel

Anton Ukhanev
A perfectionist web dev, looking to make everything work together. I help out at FIG, suggesting standards. I create my own standards and compliant implementations.
3 Ways To Learn Coding Within Three Months
#javascript #beginners #programming #career
What was your win this week?
#discuss #weeklyretro
16 Places to Find Illustrations for Your Projects 📚🎨
#webdev #design #css #productivity