A Hash function is simply a function that maps an input X of arbitrary length to an output h(x) of fixed length n. 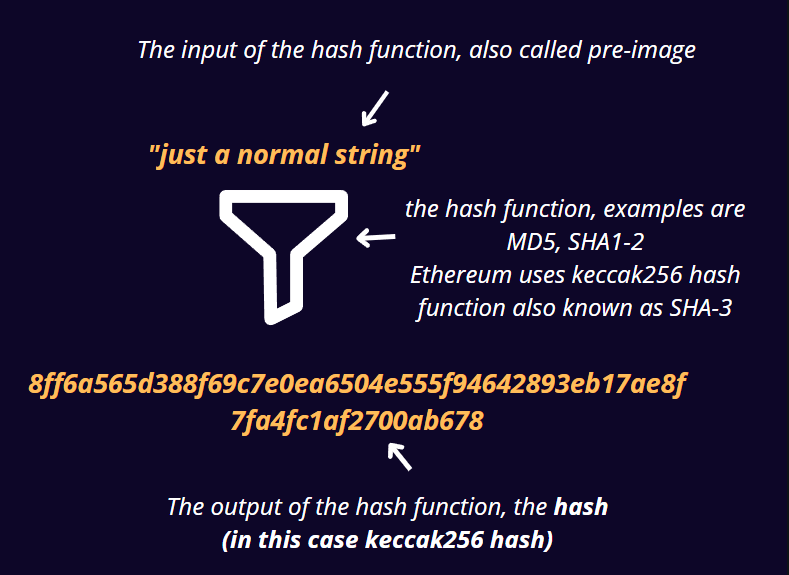 ” The input to a hash function is called a pre-image, the message, or
simply the input data. The output is called the hash"
--Mastering Ethereum, by Andreas M. Antonopoulos, Gavin Wood

So in simple words, no matter how long / short your input is, a hash function will always give you a fixed sized result.

A Hash function has two properties:

What is a cryptographic hash?

In order to become a cryptographic hash function, our hash function needs to fulfill more properties. Let's go through them.

"If a function h is a one-way-function, then a function h-1 does not
exist. It is therefore computationally infeasible to find the input
to an output of h"
-- Gallersdörfer, U., Holl, P., & Matthes, F. (2020). "Blockchain-based Systems Engineering". Lecture Slides

This means that there is no function to get the input value from an existing hash value (therefore it is called one-way, from the input to the hash but not the other way around)

This means if you have the input and the hash its is very hard to find a different input that produces the same hash.

With collision resistance, our hash function makes sure that no two different inputs of arbitrarily length, procudes the same hash.

I know what you are thinking, is this not the same as 2nd pre-image resistance I also thought about this and found a very good explanation for this 👇

To make this clear, hashing is not encryption. With encryption algorithms, we encrypt some sensitive information but with the goal of de-crypt in the future, that is, with hashing functions not possible (remember one-way property)

Use cases for Hashing

• Commitment of information ( a vote for example)

Your public Ethereum address is actually also a hash

Did you know that your public ethereum address is also a hash?

Here is a simple flow of how Ethereum creates a public address.

Often a 0x is added in front of it, to make it clear that the address is a hexadecimal number

xamhans
Quit my Fullstack Developer job to go ALL IN into Web3. Sharing my web3 learnings in public. ☀️GM to all of you
How to create a dApp with React & Solidity on Ethereum Blockchain
#web3 #blockchain #react #javascript
Blockchain Terms CheatSheet
#blockchain

Once suspended, xamhans will not be able to comment or publish posts until their suspension is removed.

Once unsuspended, xamhans will be able to comment and publish posts again.

Once unpublished, all posts by xamhans will become hidden and only accessible to themselves.

If xamhans is not suspended, they can still re-publish their posts from their dashboard.

Once unpublished, this post will become invisible to the public and only accessible to xamhans.

Thanks for keeping DEV Community safe. Here is what you can do to flag xamhans:

Unflagging xamhans will restore default visibility to their posts.