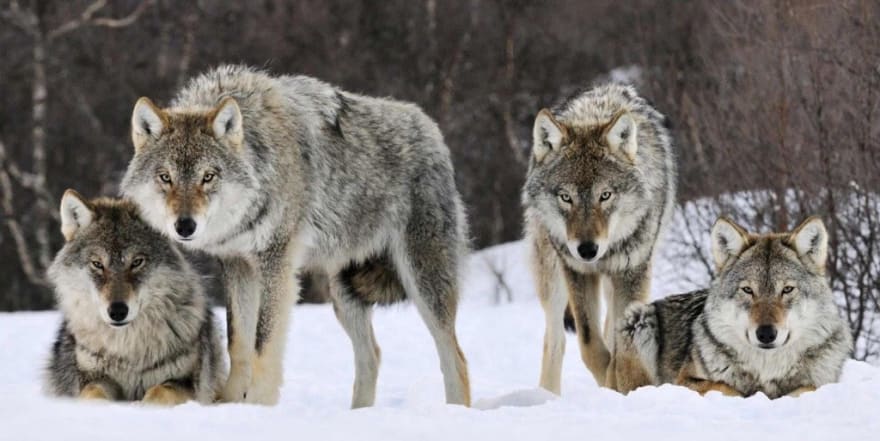 (Just a quick note here, I know that not all wolves form packs, nor are the packs they form most optimal in every situation, however…)

Having two-pizza team amounts to somewhere between 3 and 7 team members, where all aspects of the team are handled by that team. It is an autonomous team with responsibility, ownership, and most importantly accountability. If the team does not deliver nor succeed, it will fail and fall apart. No one else should be involved in the success or failure, but that doesn’t mean the team can’t nor shouldn’t rely on outside resources.

A wolf-pack team is dynamic.

New team members join as more experienced ones leave. Some may find more fitting causes for them to follow. Leadership is passed down through the team, and more essentially it is acknowledged that there are many levels of experience.

A wolf-pack team responds to all of these changes. With this type of team of 2 to 10 team members, your leaders or Alphas are responsible for training up the juniors or cubs for the future in the team. Seniors look for opportunities to become future alphas or find another pack. These are all things that happen in our existing teams, but the two-pizza teams don’t acknowledge these possibilities, so let’s solve that by doing so explicitly.

Your leaders are responsible for one day leaving the pack and having your juniors become the new Alphas. Will they be ready one day, or do things have to change? Change is natural in technology teams but also in all sorts of teams. The only constant anywhere is change. Planning for it is the only successful strategy. The Law of Legacy from The 21 Irrefutable Laws of Leadership by John Maxwell explains this well:

A leader’s lasting value is measured by succession.

A leader’s lasting value is measured by what he leaves behind. This in turn requires a leader to be highly intentional about his legacy, including knowing the legacy he wants to leave, living the legacy, choosing who will carry on the legacy, and deliberately passing the baton.

Knowing that your leaders will leave your team puts you ahead of your competition and starts your team a path to success in whatever you want to acheive. You start to focus on growing your cubs and not just leaving them there. There’s a realization that they are the future of your pack and that your Alphas will take them there. You can’t make your cubs grow by interfering with the pack, the pack takes care of itself.

In the case that there are some Betas, they might find themselves an opportunity one day to become the new leader of the pack, or find a new pack elsewhere that better fits them. This happens today with all our teams, but without the attention to the possibility or desire to support these migrations, we attempt to ignore a critical aspect of our teams.

Over time, your teams change just as your tech does. It’s important to recognize these changes and embrace them. The two-pizza team is a great start, but when you start to evaluate effective leadership, team growth, and individual responsibilities, the two-pizza team lacks critical understanding of these. Think about the pack you want to raise, and how to train them for their next hunt.

Scrum Got 3 People Fired From A Software Project!

When SCRUM is not the correct choice?

Agile/Scrum for a self-taught developer?

Warren Parad
Long time software architect, creating application security plug-ins for any software application with Authress. Talk to me about security in microservices or service authorization.
Promotion in Action: What everyone should know to get to the next level
#careerdevelopment #careergrowth #leadership #engineeringmanagemen