When you're 30+ years old, married with kids, it may seem impossible to change careers into tech without getting a degree and potentially taking on a bunch of debt.

That's exactly what I thought. I was stuck working at factory jobs that treated me subhuman and so were all my friends. I remember a time I asked for a day off for my daughter's birthday, and was literally laughed by the supervisor. I wasn't making a lot of money, I had to take care of my wife and 6 kids, and work tons of overtime on 12 hours shifts. Sometimes I was working 2 jobs. I was miserable.

How I Got Started Learning To Code

One day I was said, "This can't be life, I have to figure this money thing out". From then I started several things, from a YouTube Channel, a cleaning service, and selling t-shirts on Shopify. I was constantly looking for the right skills to learn so I could dig myself out of this hole.

I stumbled across a forum post and everyone was talking about buying Colt Steele's Web Development Course. I looked up what web development was and the pay and I told my wife "In a year to a year and a half, I'm going to get us out of this".

My wife was super excited she said she "just felt" like this was the right move for our family. So after working 12 hour days I would come home and code. My wife sacrificed her time so I could put in the work and I appreciate her for that. I know it wasn't easy. We both had our eyes on the prize.

I know that since I didn't have a degree, I was "old", and my job history was mostly manual labor and call center work. My resume wasn't going to have people beating down my door to hire me. I figured a way for me to stand out was to get to know as many people in tech as possible.

After about 2 months of learning, I started to go to meet-ups(if they were on my off day), volunteered to teach kids to code with my local CoderDojo once a month, mentored at a workshop to teach women Angular, attended the biggest developer conference in my city. I even spoke at a few meet-ups before I got a job.

I would meet people and tell them what I was doing, ask them questions about what they were doing, and try to learn as much as possible. During this time I'm still learning to code before work, and on weekends. I was super tired and exhausted and always felt like I wasn't doing enough.

I built relationships with developers, I reached to be on a podcast before I had a job. I was blogging things I was learning on Medium. I consistently showed up and I think I really proved that I was willing to work hard.

It wasn't all fun & games. This process was stressful, I was getting forced to work overtime every week at my old job. I was rejected from job after job, even the ones I got referrals to.

Most jobs wouldn't even call me back. At one point I thought maybe this is what I'm meant to be. Honestly, it hurt thinking I was stuck here and couldn't do more after trying so hard.

Going to work putting powder in boxes 400 times a day really seemed like a waste of my time and potential. I wanted to do more and experience more.

When I was studying I stopped doing anything fun, no TV shows, no video games, no sports, and no Netflix. I think I saw two movies(Avengers). It was just work, code, and reading books. If I wasn't with my family.
I wouldn't recommend this, but I felt like I had to go hard
like I was making up for the lost time.

I remember when I went to New York for CodeLand Conf (I got a free ticker off Twitter), I took a flight there and back. I took one day off of work and I only had one day left to miss from work or I would've been terminated(We could only miss 4 days in a year). So it decided to rain like crazy that day. Brooklyn looked like it was flooded on the News and my flight got delayed.

I WAS STRESSED. I ended up making it home at 3 AM and was at work at 7 AM. Before I went I asked could I get an excused absence if my flight was delayed of course it was declined. 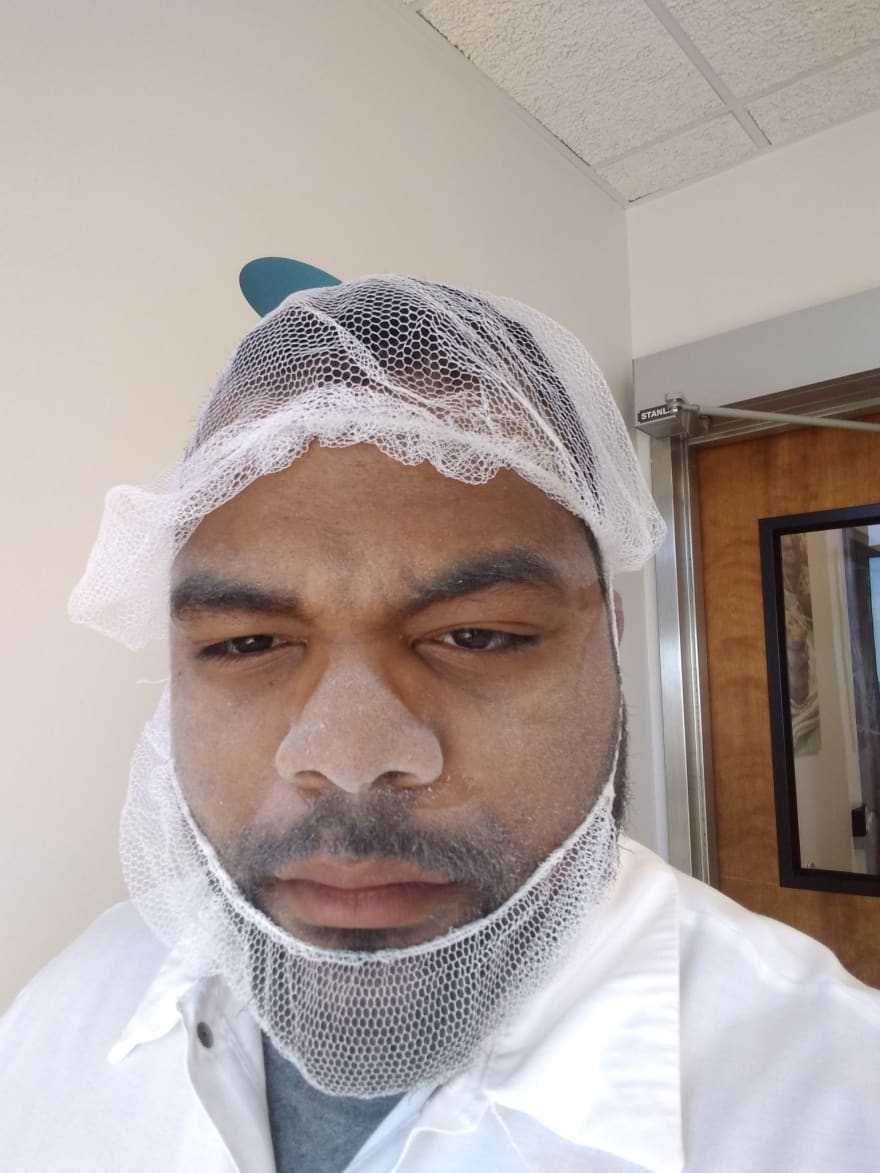 Just got off of work before heading to NYC

Light At The End Of The Tunnel

I met with the co-founder of egghead Joel Hooks over zoom after interacting a bit over Twitter. He invited me to do a few things like teach on egghead or review courses. I was too busy at the time because we decided to sell our house and look for a new one. I felt bad because I felt like I was wasting an opportunity.

Over the course of the next few months even though I was in the middle of moving. I kept posting on Twitter, I kept learning, I kept networking. My wife kept supporting me, even though she was getting tired.

5 months later after our first zoom meeting, I was offered to come to egghead to foster the community and learn Ruby on Rails. It was the biggest sigh of relief I've ever had.

I had visions of that day where I would walk out that factory and never come back. Through work, luck, and sacrifice I made it happen.

Now I spend plenty of time with my family because I work remotely. We found our dream home and life has been good for us. Looking back I would've never thought I would be here.

Currently, I'm aiming to get better at Ruby on Rails and React and continue to build new relationships and help others build themselves professional networks.

PHP: Useful Encoding and decoding Functions You Need to Know