If you're a regular user of my blog, you'll notice that I finally had the time to redesign my site from the ground up. I made my first commit on March 30, 2018 and launched the site soon after on April 5. After a year of working extensibly with React and Gatsby-based sites, and my deeper endeavors into the design system space, I wanted to take my new experience and channel it into a new interface for my personal content.

And the old site was looking, well, old.

The redesign is elevated and overengineered with a purpose — to serve as a boilerplate for future Gatsby projects and provide an example for others looking to design from the ground up.

🔗 Peruse my source code (and star 🌟) my Github repo here.

I set out with a few goals in mind to establish the boundaries of the design. It provides greater context when researching and accruing inspiration in a mood board. It also serves as an excellent anchor during the design process to ensure nothing embarks too far from the original intention.

With the goals laid out, I also tried to envision what new aspects of the site I'd have to design and develop. It allowed me to answer the question:

"What do I need from the website, and what would that require practically?"

I laid out a clear vision for the tech stack:

The original site design was created using Gatsby v1. The website was working great, build times were fine for the scale.

In this particular case, v2 of Gatsby meant faster build times (thanks to optimizations + Webpack v4), fixed security issues with dependencies, and any funky bugs that have gotten patched.

I live tweeted the entire process here so you can see what kind of issues I encountered along the way. Honestly, just reading the Gatsby migration guide enough to solve 80% of the issues immediately.

Since I wanted to design components first, I wanted to leverage **Storybook** and it's ecosystem. It's an amazing tool for design systems or component libraries, offering a lot of fantastic utilities outside of the simple hot-reloading setup. Namely, the accessibility tools are indispensable, allowing you to ensure each component passes accessibility standards (from WCAG to color blindness). 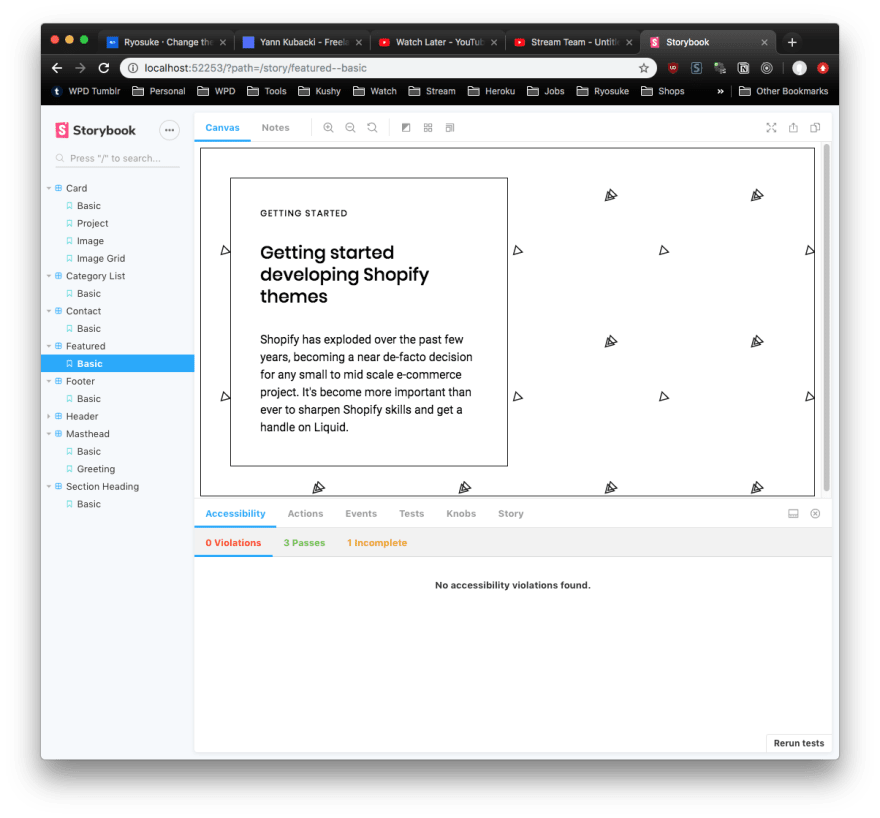 Some people call it Storybook Driven Development, and it's been growing on me as a more refined workflow.

I've been working a lot with MDX recently since I work with design systems and documentation, which benefit immensely from it. MDX is like Markdown, but allows for the use of React components inside your files by writing JSX.

This was pretty mind-blowing discovery when I first encountered it, since I come from a Wordpress background, and this seemed like the shortcodes there. I'm a huge fan of things like shortcodes when it comes to CMS and content authoring, it empowers the writer to create more dynamic and engaging posts using off-the-shelf components. And it's ability to simply use React components minimizes any overhead of having to create any specific "shortcode" templates.

After seeing a few blogs by Amelia Wattenberger and how she creates incredibly interactive and engaging components to showcase her content. It increases comprehension and overall enjoyment of the user. I wanted to take my previous skills making shortcodes for CMS like Wordpress or Kirby, and try designing better layouts for common content patterns (like code blocks, side by side examples, graphs, etc).

One of the first and easiest components I added to MDX was a live code editor. I add a live parameter to my Markdown code blocks and it renders a React component that displays the highlighted code alongside a live preview. This lets users get immediately engaged in the code, rather than having to fork it, make a pen/sandbox, etc.

The entire website was developed with a design systems mindset. I started by establishing a more concise style guide using the pre-existing brand assets inside Figma. Figma made it easy to create color and text styles to eventually compose a component library (buttons, cards, just standard things I'd need). These components made it effortless to plug and play them as modules inside page layouts, which served as mockups for pages like the frontpage and blog archive. 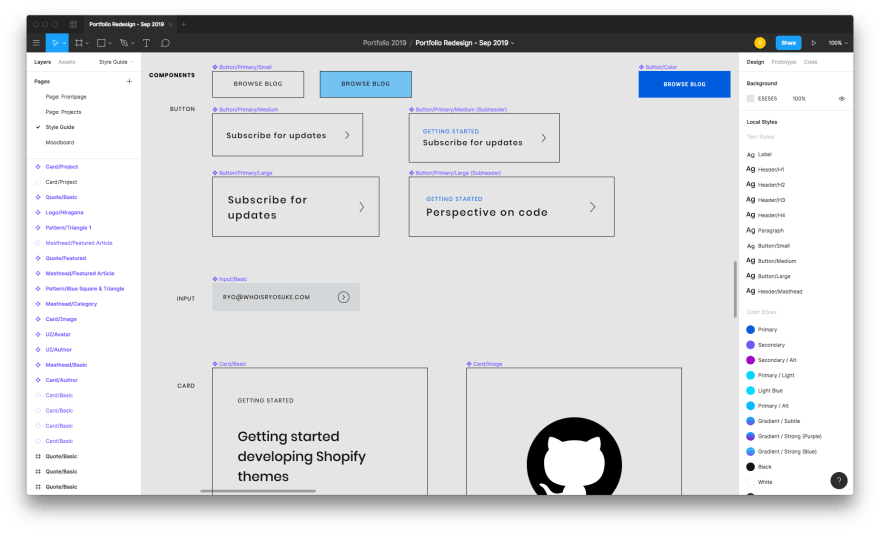 The design tokens — colors, typography, spacing, sizing, and much more — were translated from the Figma design document to a Typescript "theme" file. This file contains JSON interpretations of the Figma styles, and the tokens or variables are used across the application.

I also opted to use Rebass components as the basis for my React component library. Once I had to take my design to code, to expedite the development process, I wasn't interested in recreating all the "base" components (like buttons or form elements). Rebass allowed my to extend it's fairly un-opinionated and un-styled components to make my own.

With Rebass, also came Styled System, an opinionated way of theming components using Emotion or Styled Components. It's kind of like utility CSS meets CSS-in-JSS, where you can provide any component props like width={[1,1/2,1/3]} to set the width responsively. This would make a width of 100% on the smallest viewport, and 33% on the largest. You can also define these responsive parameters, as well as other styling/CSS parameters, inside the theme file as "variants". This allows you to create things like <Box variant="card.basic"> , which would apply card-like styling based on what you define in the theme file.

This made working with Styled Components a bit easier, since re-composing or extending styles can be a little odd due due to the sheer simplicity of the framework. Normally you'd create a file with CSS literal blocks containing re-usable styles across components, or even functions that act as SASS-style "mixins" that return CSS literal blocks. But once you read up on how Styled Components works, you'll find it basically does all this under the hood for you with Styled System, and keeps your theme file as the source of truth for reusable styles (instead of disparate JS files).

I've been working with more Typescript projects as it's popularity and use grow, and what better place to continue my practice than my own blog. I also wanted to take the opportunity to experiment with how Typescript can be integrated with design systems and how much it offers to the developer experience.

In a recent talk by Isha Kasliwal, she discussed the benefits of using TS in design systems. I was already on this wavelength, and seeing a talk on it just reiterated the need to experiment more with it.

As someone who benefits regularly from free resources, I like to create free resources and assets to contribute back to the community as much as possible. I've been doing it for years on a variety of different platforms (stock photo sites, Github, Uplabs/Dribbble) but I never really had a place for to aggregate them on my personal website.

I had to decide if I'd like to curate or aggregate the content. Gatsby makes either easy with it's content mesh and various source plugins, but I wanted to ensure whichever avenue I picked would be simple, effective, and future-proof. 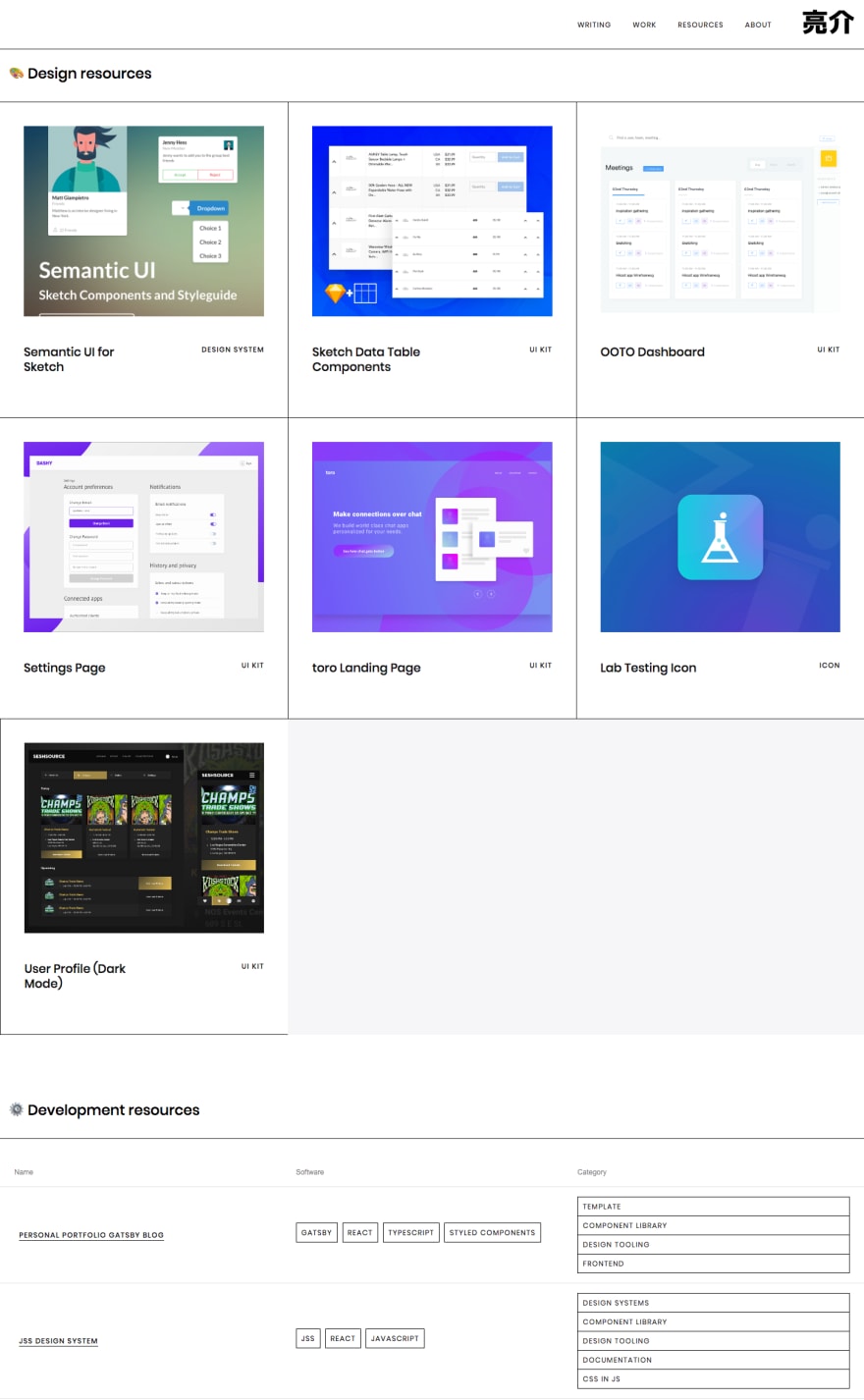 At first, you might say: "hey you need Github repos, why not pull from the API?". Since my resources were so disparate across many different platforms (like Gitlab in some cases), and I didn't want to list all my repos so I'd have to filter anyway — I opted to create JSON files in my website's repo to act as the content hub for this data. I've had experience before using the JSON transformer plugin for Gatsby, which takes JSON files and makes GraphQL endpoints out of them (pretty 1:1 too, making mocking and data structure fairly easy).

Branching from my goals, I started to browse design inspiration resources like Behance, Dribbble, and my Instagram Bookmarks — as well as Awwwards, the Gatsby Showcase section, basically any directory with quality websites.

I gathered links in a Trello card, as well as notes as to what particular part of the website I particularly liked, and what part of I could replicate on my own. I took copious screenshots of any sites within the spectrum of my desired aesthetic, refined them down to what was closest, and then imported into a Figma file for easy access during design.

Ultimately I was looking to create something that channeled my background in editorial design creating print such as magazines, newspapers and eventually digital blogs.

Strong typography, uses or emphasize on grids and design systems, yet consistent room for breaking the system for unique designs (i.e.: magazine spreads vs simpler articles). 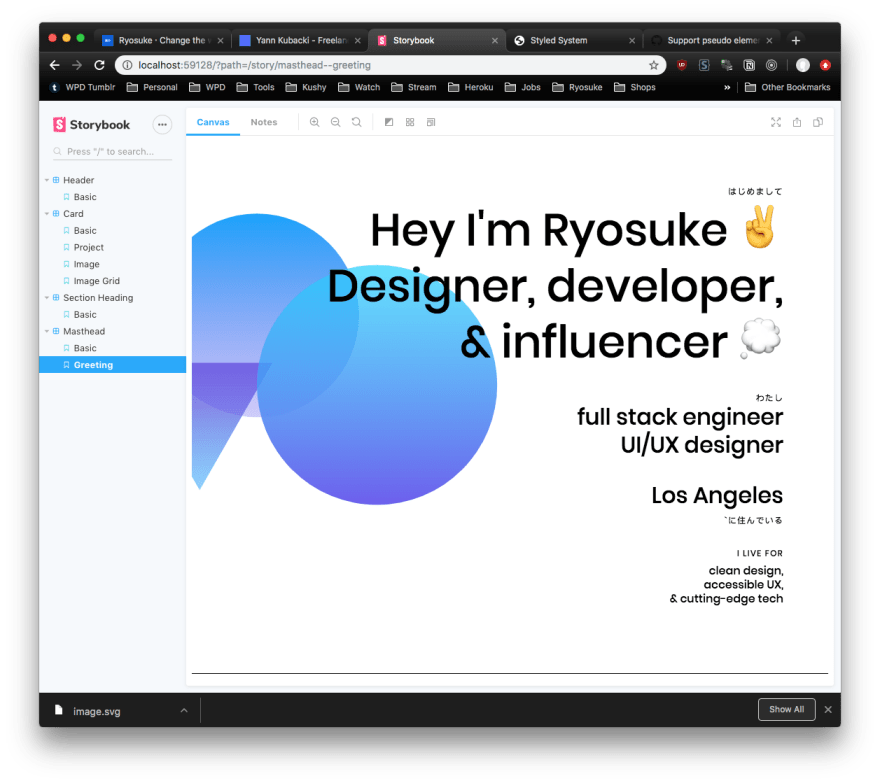 I primarily drew inspiration from:

⛓ How the app works

Every new ambitious project or change usually invites a slew of new issues that test a developer's patience, and ultimately elevate them to a higher level (where experience is defined by the sea of solved mistakes you leave in your wake).

This project was no exception - and most of my issues stemmed from my fierce need to rewrite everything in Typescript, which complicated work with any library using it's own Webpack config. Here were some of the major issues I encountered and why:

Because of the scale of the project (and how much potential blog fodder I have), I've broken up some of the features into milestones that'll be released with an article alongside describing the process in depth.

There's still a lot to do (like actually add types to any props), but I'm very happy with the breath of fresh air and delight I was able summon with the site's current state. If you have any feedback or issues, feel free to hit me up on Twitter (or in the comments on Hashnode/The Practical Dev).