Wouldn't it be cool if you could create a website by dragging and dropping pieces of it around? To some it sounds like a green-weaved nightmare, to others it sounds like a proprietary platform — but this fantasy of freedom is becoming closer to being standardized into modern design and development workflows. With software like OpenChakra, Blocks UI, or even Playroom — we've gotten a taste today of what platforms like Framer, Modulz, and other's have promised to use in an unforeseen future: design to code.

So I got to thinking, how would you actually make a UI for building sites with components (like Figma or Sketch) and then export that to code?

And by thinking, I mean researching, reverse engineering, conceptualizing, and inevitably coding: design-system-builder. A small React app that accepts Reacts components to drag and drop into an "artboard" or "canvas", and then exports that to React code (or JSX) you can import into your project. 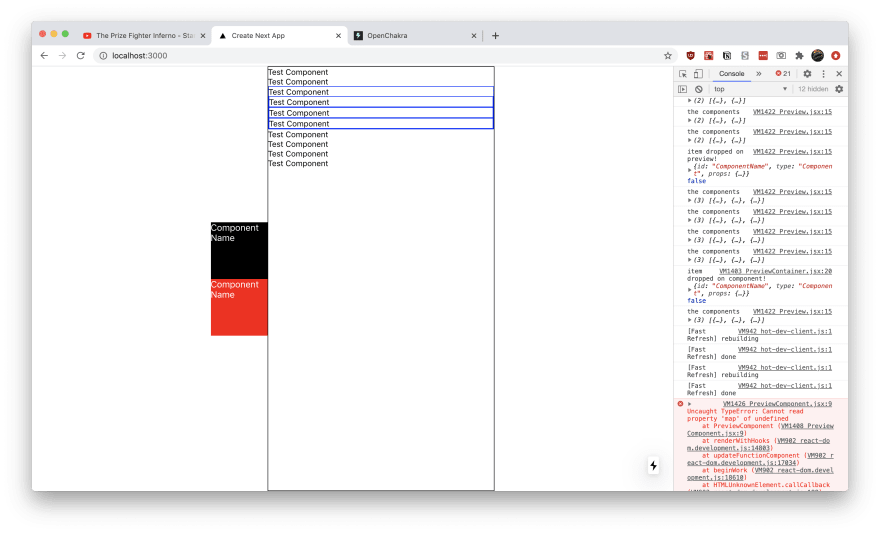 Check out of the source code here, or read on to discover how I built it.

When you know something already exists, or even if you don't, the best place to often start is research. I already knew about OpenChakra, Blocks UI, and Playroom, so I started there. I reverse-engineered each project to see how it worked, and took notes on it.

To give you an idea of how I approach this process for a software project:

So let's check out the breakdown of each project: 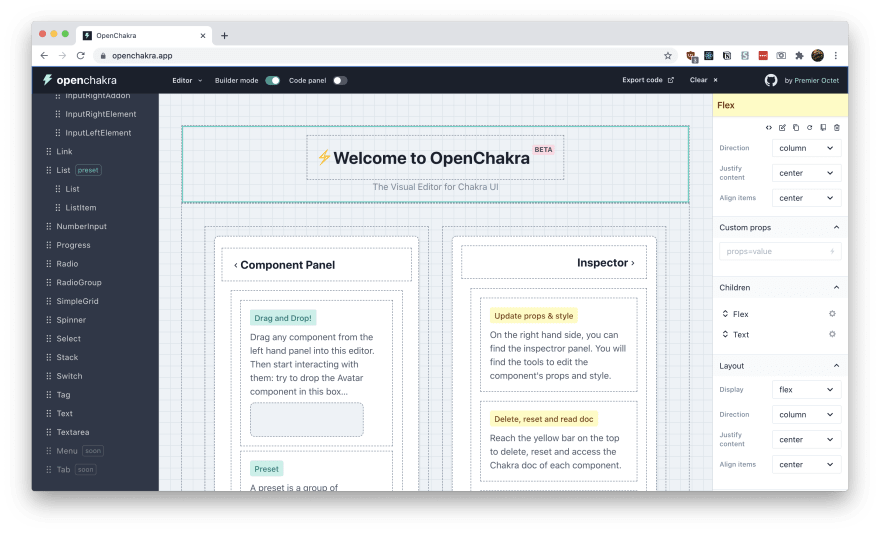 I went through the process of adding a custom component to OpenChakra (outlined roughly above). You can see it on my Github in a custom-components branch. 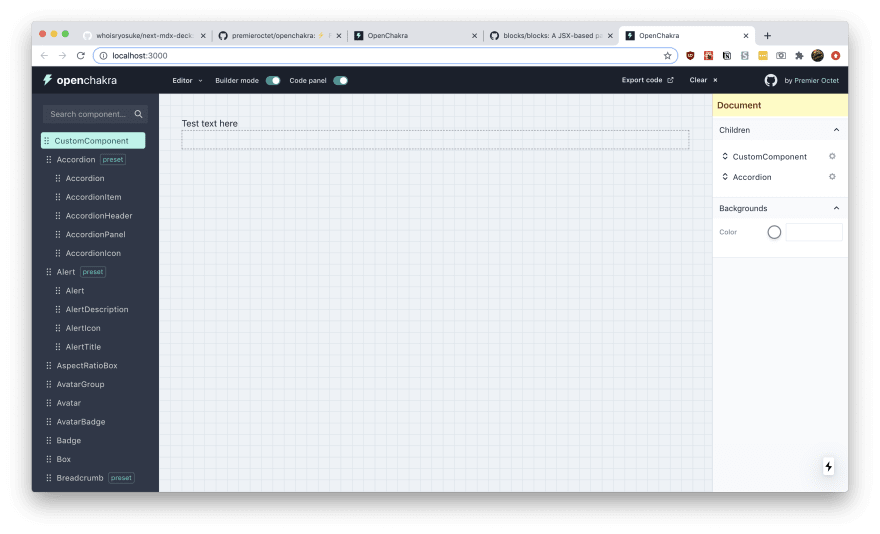 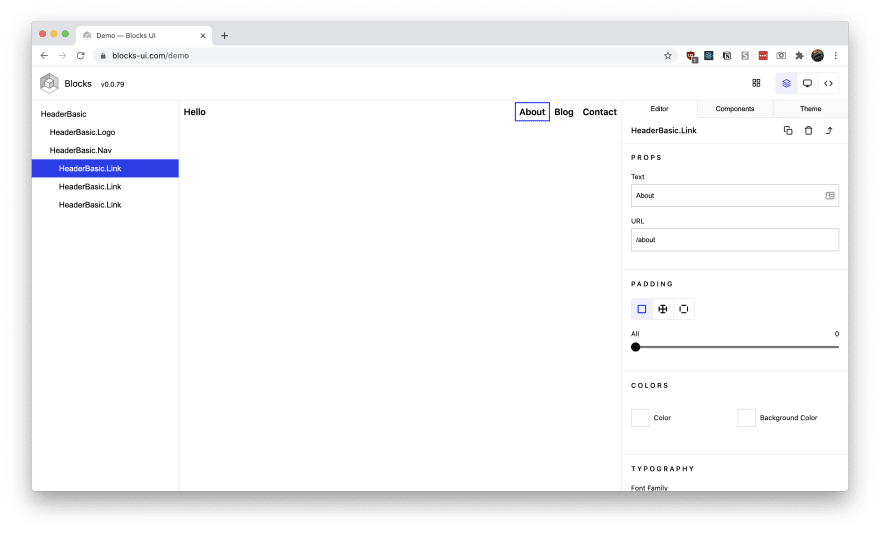 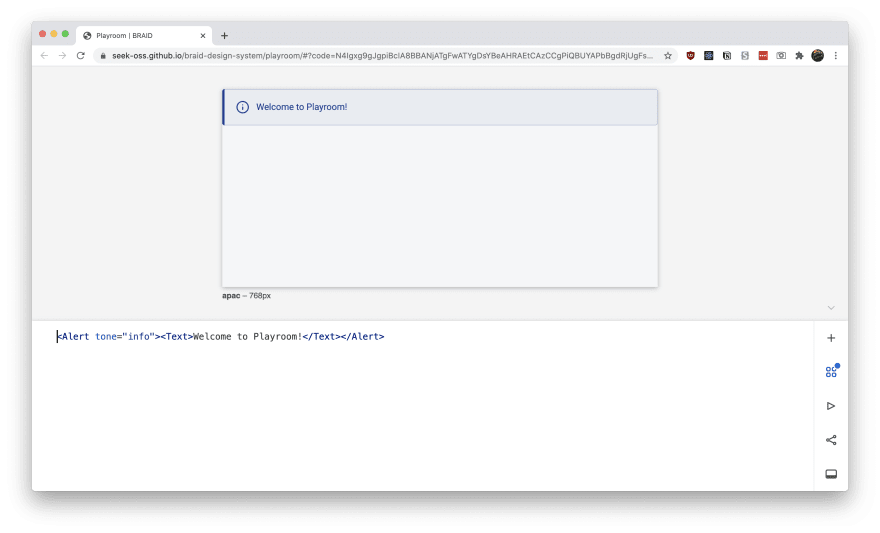 After a sufficient amount of research, I set out to plan out the feature set of an MVP product.

I definitely didn't complete all these, but just outlining these from the outset helps the development process immensely.

Now that I knew I was going to use the state to store the component data (similar to OpenChakra), I wanted to structure how it'd look. I also needed to create structured data types react-dnd.

For the "drop" to work with react-dnd, you need to attach data to the object you're dropping to let the "drop area" know what it's accepting. The id is basically the component name. And you can set a type, so if it doesn't match, it won't accept the drop (to allow multiple drop points in an app). In this case, we signify the type is a "Component" (which I made constant in my app called DATA_TYPES and stored it as a object property there).

For the structure of the React state (or context), I wanted to make sure that it could support an infinite amount of children. That way, we could nest components as deep as needed, and recursively render it.

Figuring out this part of the app makes everything basically possible, and thanks to React, it's incredibly simple.

You use React.createElement with a component name (and props) to generate a component dynamically. We also store all the components in a single object to make it easier to look them up using a hash map named PreviewComponents (and safer, since you won't be calling random function names).

To develop the initial prototype, I used NextJS to quickly bootstrap a React project. I then added react-dnd, and setup a simple drag and drop example using a placeholder box and preview container. When you drag the box into the preview, the "drop data" was displayed to the console.

From there, I created a context for the components to be stored in, then wired up the preview (or "drop area") to send the "drop data" to the context.

Then I refactored the preview to use the context state to display the context data, which was an array of component names. I displayed them as strings first (as a sanity check), then integrated the dynamic render using React (discussed above). I created a recursive walkChildren function that goes through and renders all children (and children of children).

Once I was able to display top level components, I worked on nested children. Each component that gets displayed in the preview had to get wrapped in a new component that was essentially a new "drop area" (so we'd have one big preview drop, then smaller drops for components). Inside this wrapper, I connected it to the context to add new components when they're dropped. This component also needed to dynamically render, since it's passed a component object that may have the children prop (more more component objects).

I was able to display a sample React component, but I wanted to be able to display native components using react-native-web. Thanks to Expo, they make the process easy with their Webpack config and NextJS example.

I followed the guide for adding Expo to an existing NextJS project and I was able to start using React Native components (like <View> and <Text>). You basically install an adapter, run it, and it generates (and modifies) the necessary files.

After building it from scratch, I just kept looking at the feature list and thinking about how much work goes into this. One look at OpenChakra and how polished of a product it is (despite being alpha/beta) and you can see how far you can go with this kind of software.

But I hope seeing the how the core functionality of the drag and drop builders works, you can start to see the wires behind experiences like Figma or Framer.

Module parse failed: Unexpected token. You may need an appropriate loader to handle this file type, currently no loaders are configured to process this file. · Issue #996 · akveo/react-native-ui-kitten

6 Python Tips & Tricks that no One Teaches 🚀🐍