When creating a design system, it's often useful to break things up in to smaller, separate modules (or packages). When you decide to deliver each component separately, or utility modules alongside your components, you'll find yourself in a sticky situation.

Do you refactor it out into a separate git repo and NPM package? How does that get managed - like sharing builds/testing flows? How do you create a development environment that can be spun up easily without fussing too much with npm link? This is where Lerna comes in.

In this article we'll go through what Lerna and monorepo's are and how to use them to create and manage a new design system. Or skip ahead and check out the source code here.

What are we building?

Here's a quick overview of what we'll be building and what technology we'll be using to make it happen:

Lerna is a tool for managing JavaScript projects with multiple packages.

When I say Javascript project, that means one single git repo. And when I say that project has multiple packages, I mean that there's multiple modules (like NPM, Severless Functions, maybe even Composer or other languages) inside one git repo.

What is a monorepo?

This is what a monorepo is. One repo for many projects/modules/etc. 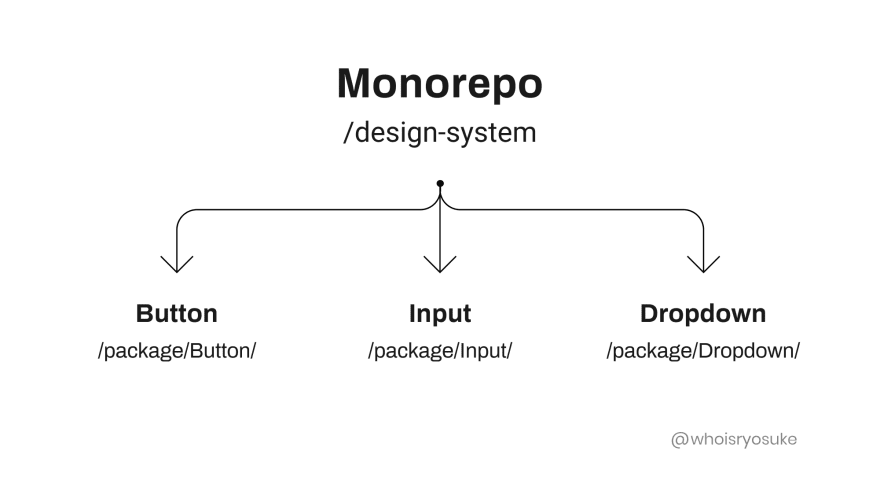 Many larger companies like Google and Facebook, as well as smaller companies like Gatsby or Vercel, use monorepos to help manage large scale projects. In Gatsby's case for example, their monorepo contains the Gatsby CLI, starter templates, and even their plugins — all within one repo, ensuring that you can tinker with any particular package locally.

When you want to create a monorepo and more easily manage multiple packages simultaneously.

You can often do all of this without Lerna by leveraging the same dependencies (like Yarn Workspaces), but Lerna gives you a lot of this functionality out of the box. This eliminates the time spent writing common scripts and workflows.

Now that we understand what Lerna and monorepos are, let's actually bootstrap one!

This will bootstrap your project with the following files and structure:

After you run the lerna init process and the configurations above, you should be using a folder structure similar to below: 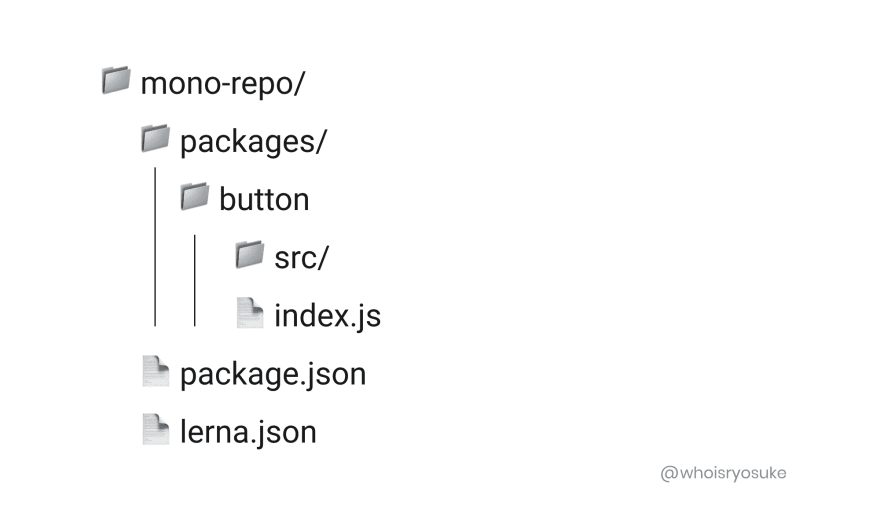 Inside the /packages folder you can place any packages (aka NPM modules) that you'd like to split your project into. For example, you could have website and components folders, where one contains the site and the other contains the components and design system.

All packages should be on the same folder level. This means you shouldn't nest packages (like a components/button folder). Each folder inside the /packages folder should represent a needed NPM module.

Keep in mind that you're not required to use the /packages folder or name. If you change the configuration in your package.json and lerna.json you can have your NPM modules located in any folder (or subfolder).

Now that you have your first monorepo, let's learn some common commands you'll use on a regular basis with Lerna.

First you'll definitely want to use Lerna to create new packages and link them together. Then you can dig deeper by running commands on all packages, or publishing to NPM (even using conventional commits if that's your thing).

If you have an NPM Org Account which supports private packages, you can add the following to your module’s individual package.json:

Installing a local package as dependency

Often you'll find yourself wanting to use one of your design system's packages inside another (like using a core package inside your components package, or button inside a form).

In this case, Lerna has a command lerna add that handles adding the process of linking the local package to another package (using yarn link to add to the package.json).

In this case, form will have the button as a dependency.

You can install a package to all packages in the monorepo by running lerna add package-name.

Run command on all packages

Lerna has a command you can use to run the same command in every package. By running lerna run test, this command runs a script that goes through each package and runs the test script declared in package.json.

It's recommended you create a separate package that contains all the testing dependencies and add it to all your other modules, this makes it easier to manage testing across all packages by isolating dependencies to one location.

Remove dependency from all packages

If you added a dependency that you no longer need in a certain package, Lerna comes with a command to remove them from the Yarn workspace (and thus shared dependencies).

When it comes time to publish your packages to NPM, Lerna can handle this process for you. Once you're logged in, you can run Lerna's publish command to create a new release containing any packages that have been updated, as well as updating any packages on NPM.

If for whatever reason you want full control of the versioning, Lerna has the ability to split versioning and publishing into two commands. This can help with if you're looking to have more control between version and release,

You can manually run:

Then follow the prompts to update the individual version numbers.

Then you can have a publish script that will read the latest tag (that was manually updated) to publish to NPM:

Lerna supports the use of the Conventional Commits Standard to automate Semantic Versioning in a CI environment.

This gives developers the ability to commit messages like

Then in a CI environment, the packages version’s can be updated and published to NPM based on commits like the one above. This is done by configuring your CI environment to run:

If you don’t want to pass the flags on each publish, add the following to your lerna.json file

It's one thing to use conventional commits, but it's a completely other thing to actual enforce them.

Enforcing them means using a commit linting process to parse all commits and ensure they meet the conventional commits standard.

And since it can be a pain to remember the exact syntax of commits, it's highly recommended you setup a commit CLI flow (like commitzen) to walk devs through a conventional commit and ensure it's up to spec each time.

This process is a bit involved, so I cover it in a separate article.

Hopefully this helps demystify monorepos and how to create and work with them. It's an empowering workflow that helps simplify and scale development. And it's a great skill to learn in and out of the design system world, since most large projects tend to learn towards a monorepo structure.

I used this workflow to create a monorepo that contains multiple Storybooks so I could have a kind of "design systems notebook". This way I could write notes on any frontend framework, like React or Vue, and contain all the notes in one place.

Is there anything I missed that you still don't understand? Let me know in the comments or on Twitter and I'll try to fill in the gaps 👍

Make sure to check out my Instagram post for a quick reference you can save for later: 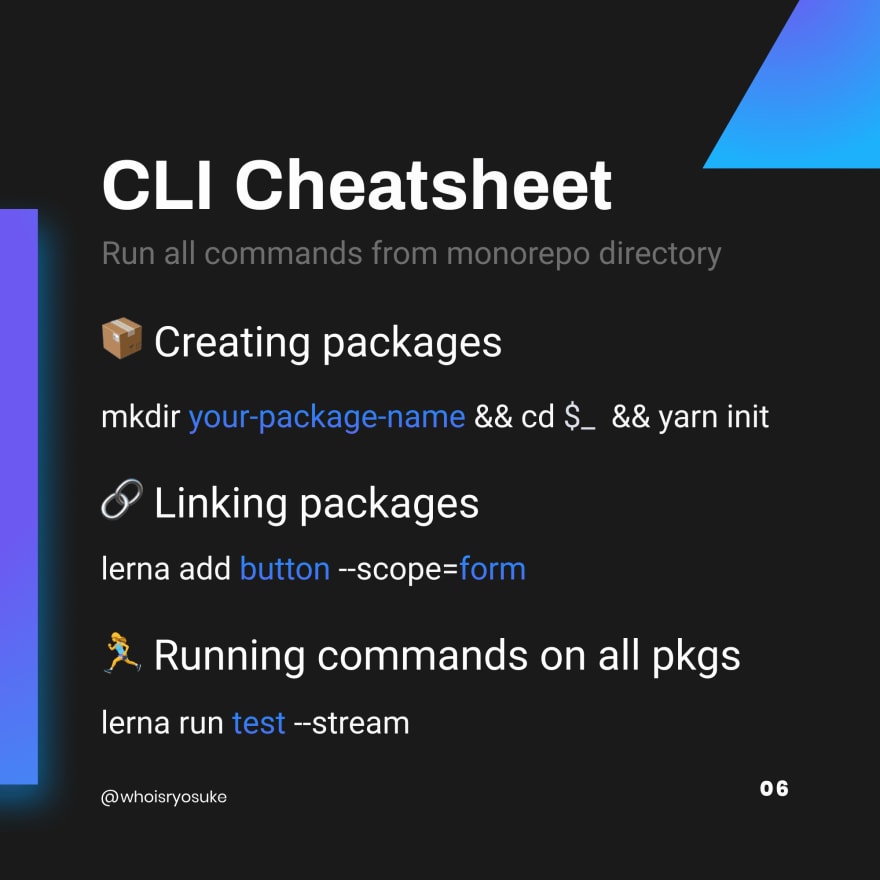