Streamlit is a web app framework with which we can create interactive web apps only with Python coding. It is especially famous and popular for data apps development as it well supports many data widgets cooperating the DS/ML Python ecosystem, while it also covers a wide range of general purpose web development.

When you run a Streamlit app, the Streamlit framework starts a web server and it serves a frontend app that is a single page application (SPA) whose contents are dynamically constructed according to your app script written in Python. Then the frontend app continuously communicates with the web server and triggers the Python code executions on the server upon some events to get some results that dynamically update the frontend view.
Due to this unique server-client architecture, we can construct interactive web apps only by writing the logics in the server-side Python code. 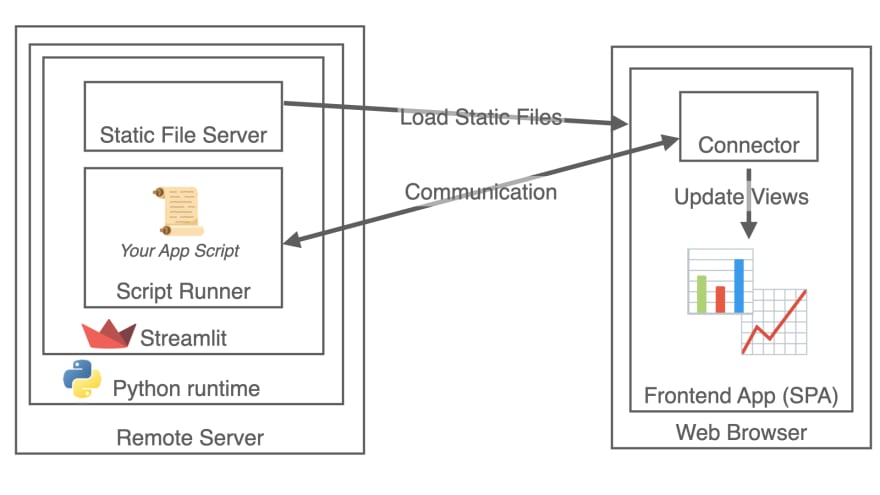 There had been an epoch-making invent in the Python world - Pyodide. It is a CPython runtime compiled for WebAssembly (Wasm) that runs on web browsers (and NodeJS).

So I customized Streamlit to run on Pyodide runtime and released it as "stlite"!

With this architecture, thanks to Pyodide, the Python runtime no longer exists on the server side since it runs on the web browser.
The web server is only for serving the static files such as HTML, JS, and CSS. 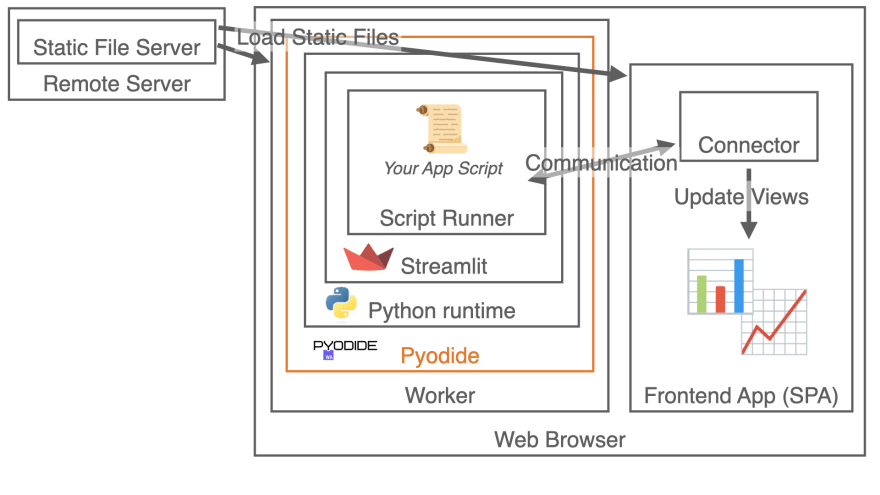 As it runs completely on the browsers, stlite has some benefits that the original Streamlit does not have.

On the other hand, stlite and Pyodide has some disadvantages as a tradeoff.

(This section is highly inspired by the blog post about Shinylive.)

stlite sharing is an online code editor + app sharing platform for stlite. It is the easiest and fastest way to try out stlite. 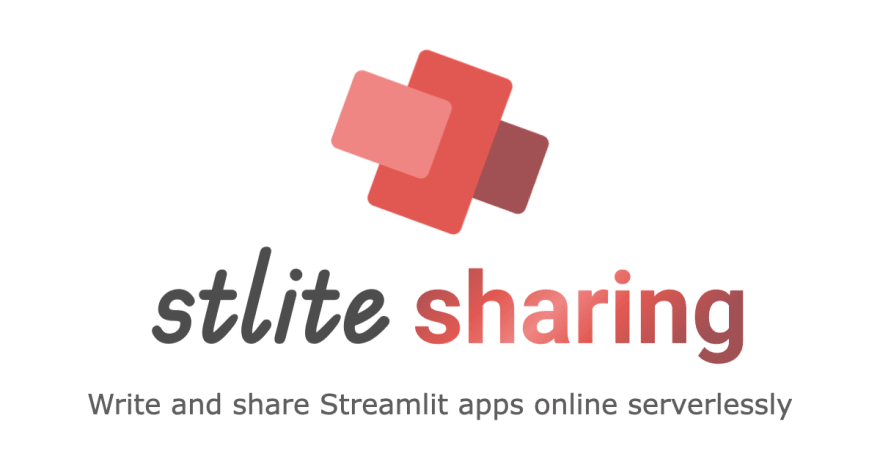 The following screenshot is the online editing & app preview mode of stlite sharing. You can try it out at https://edit.share.stlite.net/ . 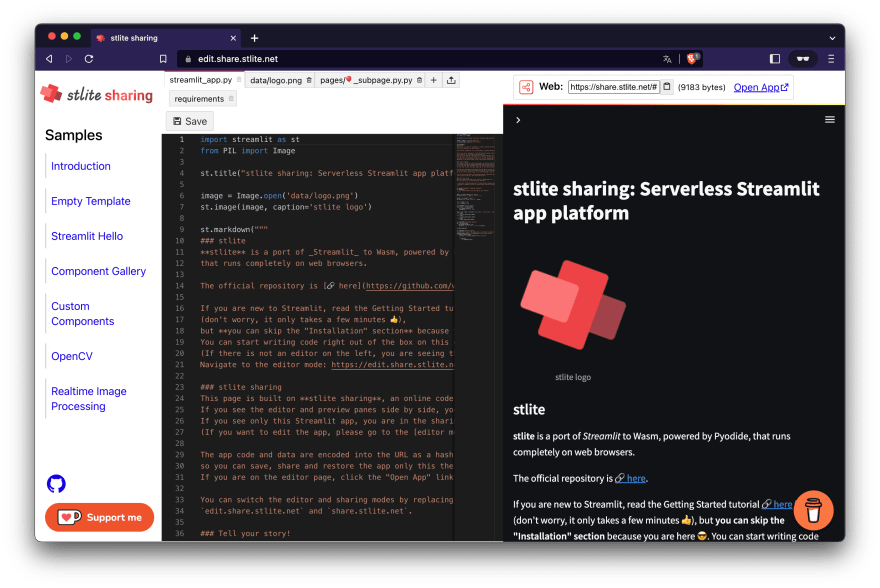 When you create/edit/delete the files on the left pane, those changes are applied to the virtual file system on top of which stlite runs, then the Streamlit server detects the file changes and recommends you to hot-reload the application, as shown in the screenshot below.
(The file change detection and hot-reloading is a part of the Streamlit core features. If you are not familiar with it, read the official document.) 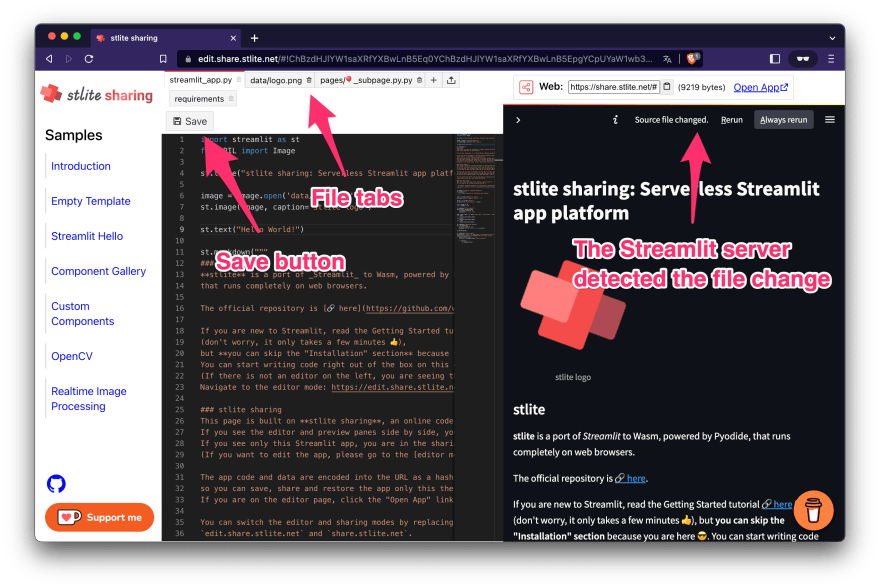 The file changes are saved to the file system when the "Save" button is clicked.
You can also add or delete the files on the file tabs.

On stlite sharing, you can get the shareable URL of the current app displayed at top right. There is also the "Open App" link next to it, through which you can open the URL. 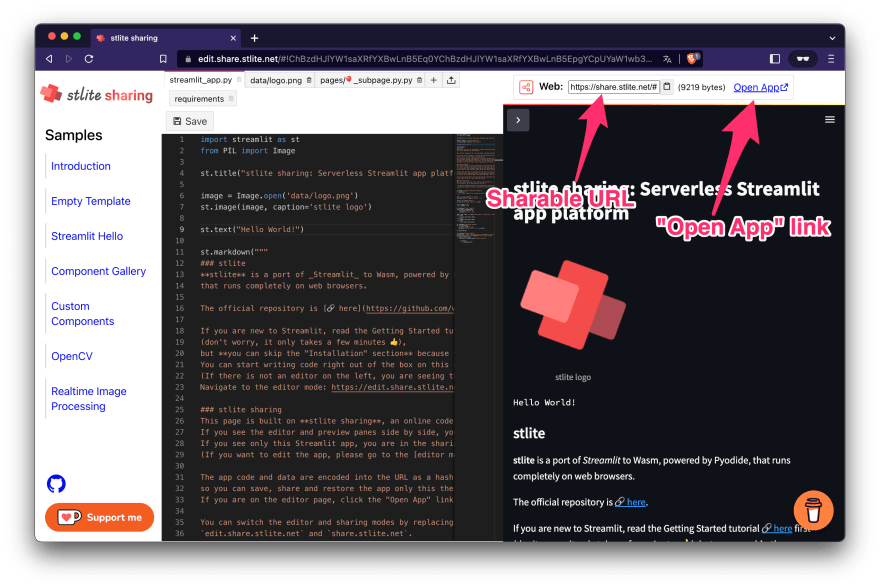 By navigating to the URL or clicking the link, the app opens in the sharing mode as below, where only the Streamlit app opens and there are not the editor, the sharing link, and any other widgets. 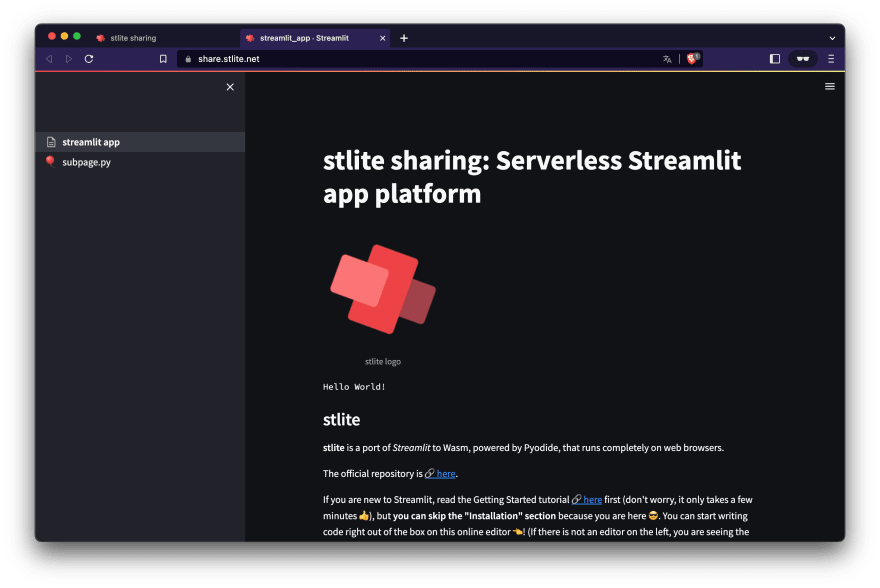 In the long hash part of the URL like #!ChBz...,
all the source code and data edited on the editor are encoded and embedded, so you can share the app only by copying this URL.

Another good point of this approach is, since all the code and data are embedded into the URL hash, these data are never uploaded and saved to the remote server.

Note that some SNS and URL shortening services cut off the long URLs, so you should take care of it when sharing the URL on such platforms. For the details, read this part of the Shinylive article.

This URL mechanism is inspired by Shinylive.

By clicking the "+" button at the file tabs area, you can create a new file.

You can also upload files from your local env (the files are never "uploaded" to any remote servers. They are just sent to the virtual file system on your browser.) Though this uploader, you can also add binary files.

You can edit the file name on the tab, and importantly, by inserting the file path delimiter, /, you can create files in directories.

With this feature, stlite sharing supports the Streamlit's Multipage apps.
In short, by creating a Python file in the pages/ directory (pages/*.py), you can add a new page in the app.
For the details, read the official document about Multipage apps.

When you need to install some packages, use the special "requirements" tab.

The package names written in the editor on this tab will be passed to the package installer micropip.install() internally (on the Pyodide runtime, micropip is used as a package manager) when clicking the "Save" button.
Write one package name per line.

This is a special tab in that the file content is not saved into the file system. It is used only for specifying the package names passed to micropip.install().

Please note again that some C extension packages cannot be installed. The following screenshot is the sample of such a case, where installing a C extension failed. 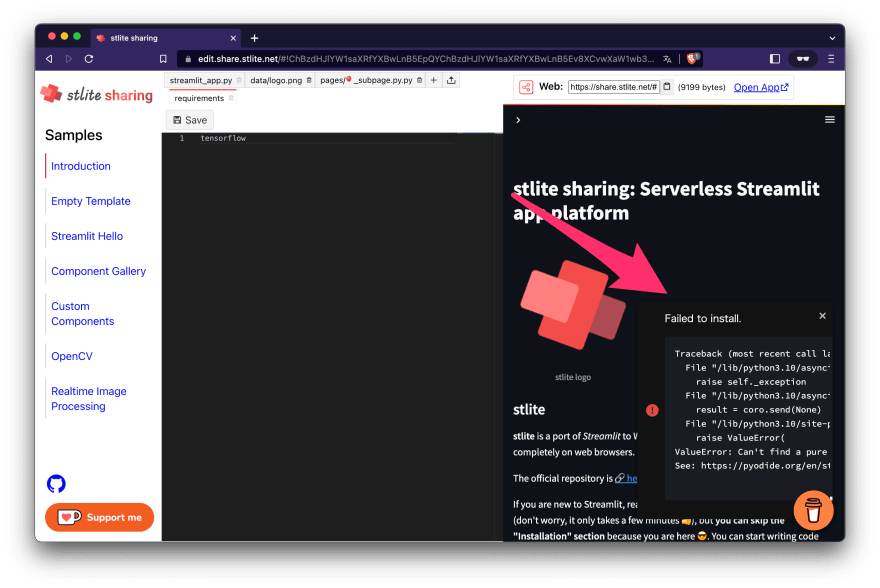 You can find some samples on the side menu, so check out these! I hope some inspire you.

For example, the "Streamlit Hello" demo runs the official Streamlit demo on stlite while it is available through the streamlit hello command with the original Streamlit. 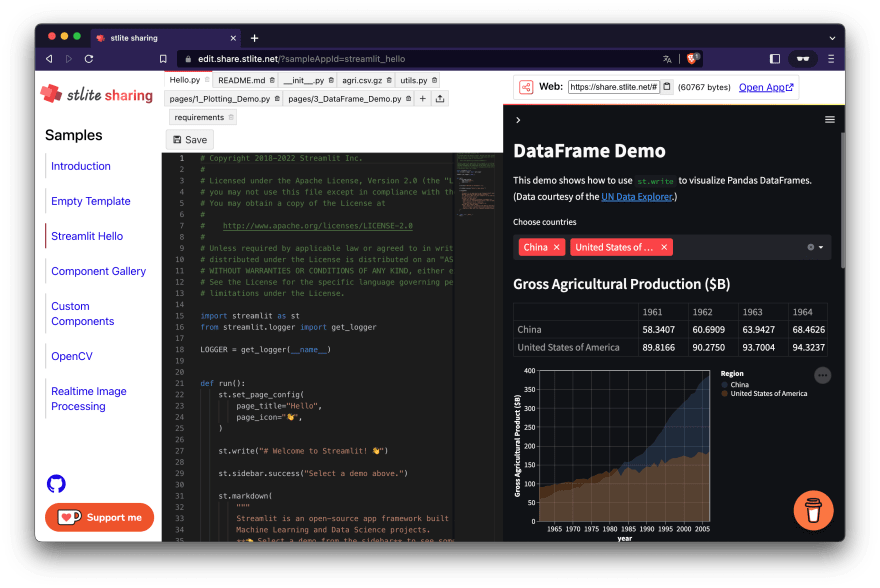 With a recent release of Pyodide 0.21, many C-extensions became available including OpenCV.
stlite sharing includes the samples using OpenCV and scikit-image with real-time video streaming. Even these samples run on web browsers and nothing are sent to any remote servers! 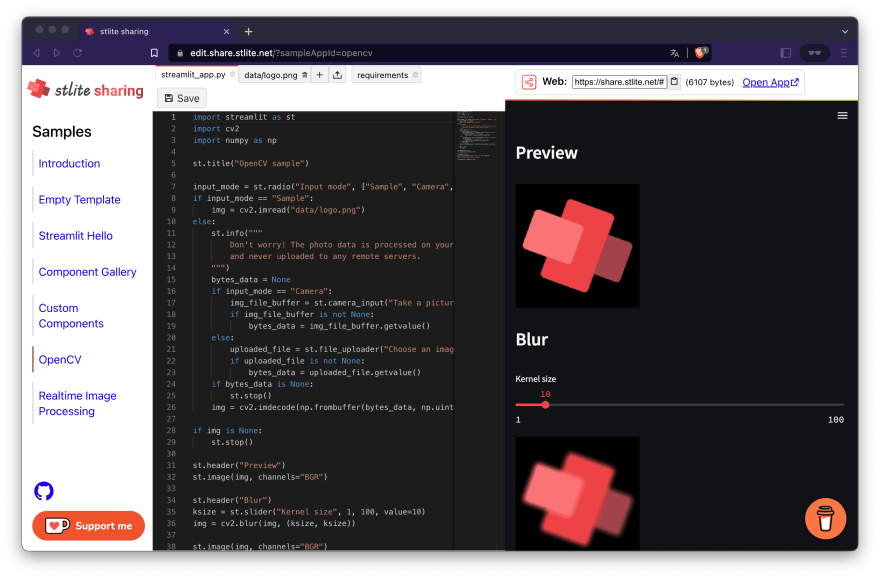 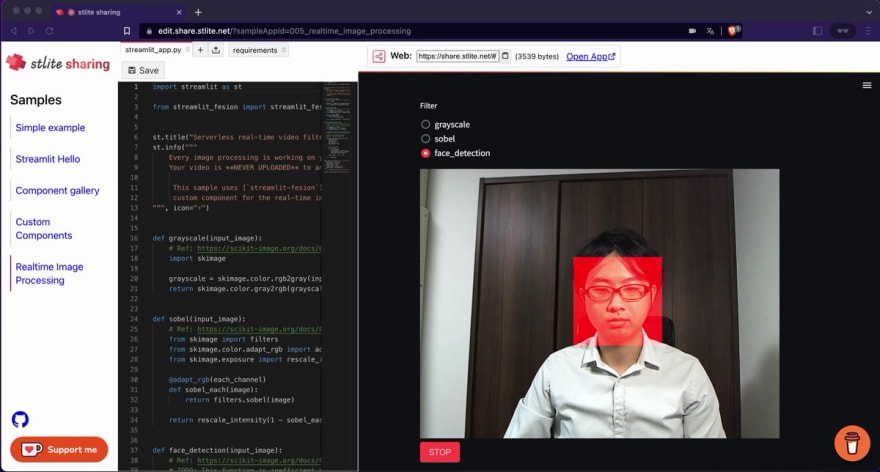 Client-side real-time image processing!
Write the app in #Python with @Streamlit + OpenCV, scikit-image, etc.,
Run it on the browser with #WebAssembly.

Everything works on the browser. No uploads!

Instead of the encoded URL hash explained above,
you can host your Python script somewhere and pass its URL to stlite sharing via the URL hash as below.

If the URL is of GitHub or Gist, you can pass the preview page URL instead of the raw file URL.
For example, https://share.stlite.net/#https://github.com/napoles-uach/test/blob/main/app.py works.

When you need to install some packages, use the following format instead.

Host your Streamlit app on your web site

All you have to do is write and host a single HTML file.

It would be something like below, where you can embed the Python source code into the JS code as a string literal.

If you need to install some packages, specify the entrypoint file name, and/or use multiple files, use the following more flexible API.

After writing the HTML file, host it wherever you like, such as GitHub Pages.
In your local env, you can test it with python -m http.server 8000.

This YouTube video may guide you to set it up on GitHub Pages (although the stlite API used in the video is out-dated now.)

Please read the README for the details about self-hosting apps!

Bundle your Streamlit app as a desktop app

The stlite apps run on web browsers, so it is also possible to bundle them into desktop apps with Electron. 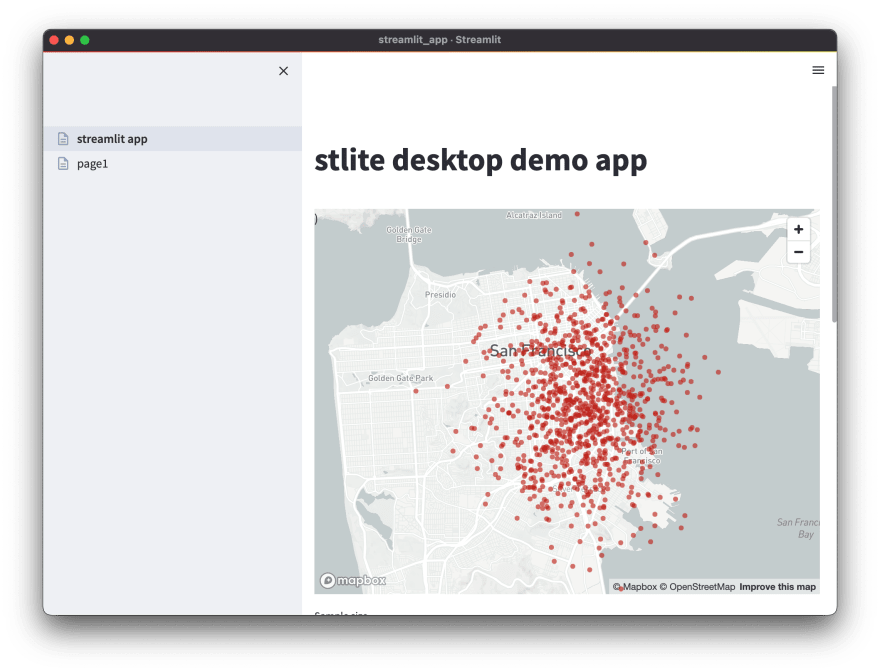 .@whitphx, the brilliant mind behind `stlite` is getting close to having '@streamlit app -> desktop app' working! 🎈🤯

To create your own desktop app with stlite,
follow this instruction! -> https://github.com/whitphx/stlite/tree/main/packages/desktop-cli#readme

There is a sample app repository and its distributable files too.

Tell us your story!

When you create some apps with stlite, please share it!

If it's on stlite sharing, all you have to do is copy and paste the URL 👍

These are good places to share your apps, samples, or case studies!

How to use ChatGPT to web scrape EASILY

How Does GPT-3 Work?

Once suspended, whitphx will not be able to comment or publish posts until their suspension is removed.

Once unsuspended, whitphx will be able to comment and publish posts again.

Once unpublished, all posts by whitphx will become hidden and only accessible to themselves.

If whitphx is not suspended, they can still re-publish their posts from their dashboard.

Once unpublished, this post will become invisible to the public and only accessible to Yuichiro Tachibana (Tsuchiya).

Thanks for keeping DEV Community 👩‍💻👨‍💻 safe. Here is what you can do to flag whitphx:

Unflagging whitphx will restore default visibility to their posts.