A recurring conversation in developer circles is if you should use git --squash when merging or do explicit merge commits. The short answer: you shouldn't.

People have strong opinions about this. The thing is that my opinion is the correct one. Squashing commits has no purpose other than losing information. It doesn't make for a cleaner history. At most it helps subpar git clients show a cleaner commit graph, and save a bit of space by not storing intermediate file states.

Let me show you why.

Git is in many ways a very dumb graph database. When you check in code, it actually stores the content of all the tracked files in your repository.

Commits are store as "commit" nodes. A commit object points to a tree, and adds metadata: author, committer, message and parent commits. A merge commit has multiple parents.

Here is a visualization from Scott Chacon's Git Internals: 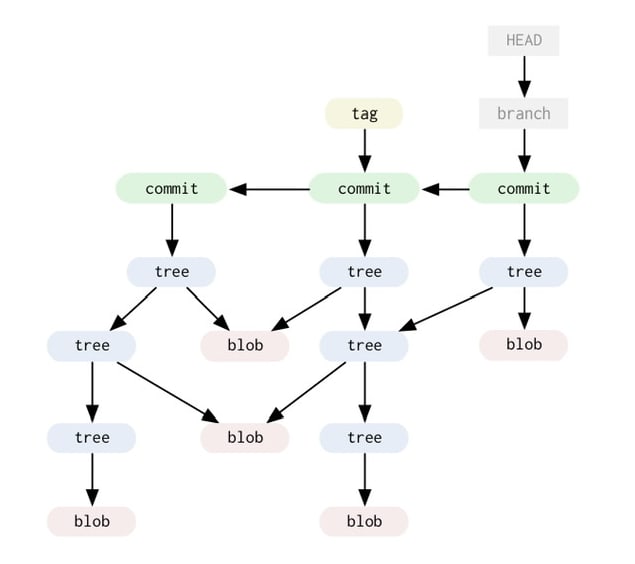 Looking at a real git repository

Enough theory, we have work to get done. Let's create a simple git repository:

We can now look at the contents of the objects we created:

But we still use diffs and merges

But Manuel, you ask, how does git diff and git merge and all that funky stuff work?

When you run git diff, git actually uses different diff algorithm to compare the state of two trees, every time.

When you do a merge, git first searches for the common parent of both branches to be merged (this can be a bit more involved depending on your graph). It computes the diff of each branch to that original commit, and then merges both diffs in what is called a three-way merge.

The resulting commit has multiple parent fields. The parent fields don't really mean anything except for informational purposes, the tree the merge commit points to is what actually counts. Once a three-way merge has been computed and applied, git doesn't really care how the resulting tree was computed.

This is literally all there is to git, and the mental model that I use every day, even as I'm doing the most advanced git surgery.

What is a squash merge?

So what is a squash merge? A squash merge is the same as a normal merge, except that it doesn't record only parent commit. It basically slices off a whole part of the git graph, which will later be garbage collected if not referenced anymore. You're basically losing information for no reason.

Let's look at this in practice. Let's create a few commits on top of the ones we have, and then do both a squash merge and a non-squash merge, and look at the results.

Let's look at the resulting graph and commits.

You can see that save that both squash-merge and no-squash-merge point to the exact same tree. The only changed thing is the commit message, and the missing parent in the squash merge.

To read more about the underpinnings of git, I can recommend just experimenting with the git command line, and the following resources:

But Manuel, you say, the history is so much cleaner!

To which I counter that it is actually not. If you want to hide the link to the right parent of the non-squash merge (as it is called, the left parent being main ), all you need to do is to hide it. If you use the command-line or a proper tool, use the option to only show first parents. If you only look at the first parent, and configure your git tool to fill in a full log history of the branch into the merge commit message (I personally use the github CLI gh or some git-commit hooks to do it), the squash merge commit is identical to the non squash merge commit.

A favorite git log command of mine to quickly look at the history of the main branch, and create a changelog:

When using github and pull requests, this will show author, branch name (which would contain ticket name and short description in my case) and date on a single line. Here's a slightly more complex real world example (anonymized)

But Manuel, why keep all those commits lying around when we have all we need in the commit message?

One comes down to just preference. I like to see the actual log of what a person did on their branch. Did they do many small commits? On which days (this might make looking up documents or slack conversations related to the work easier)? Did they merge other branches into their work (useful when resolving merge conflicts and other boo boos)?

I have done a lot of git cleanup work, and while they are not supposed to exist, big merges with thousands of lines happen, and having a single monolithic commit that contains 80 different changes is a nightmare.

The other one actually makes the side history extremely useful. When hunting down for a bug, I often use git bisect. I first use git bisect --first-parent to jump from main commit to main commit. But once I found which pull request led to the bug, I bisect on the original branch. Instead of having to figure out which line in the pull-request merge might cause the bug, I have a much more granular path. Often, it surfaces a single line commit, and leads to a painless and immediate bugfix.

As you can drive your bisect with your unit tests, you often have no work to do at all, given sufficiently atomic and small commits on side branches. Losing that capability would seriously impact my sanity when I have to fix bugs.

And that is why squashing history is harmful. It's literally just deleting information from the git graph by losing a single parent entry into the merge commit.

Manuel Odendahl
I like programming!
Two things I find difficult
#programming #webdev #embedded #datascience
What I learned about writing and workflow during the pandemic
#career #productivity #writing
How I Got Into Computers - Thomson MO5, My First Love
#programming #career #beginners #basic