"I'm just summarizing my React learning routine here, your follow will be my motivation to update. Hope it will help you to improve your understanding towards React as well. Noted that the React version discussed here starts from 16.8 onwards. Concept such as HOC and class components are not included. (updates regularly)"

1. Why do we choose to use React?
2. React Synthetic Events
3. Why should we use hooks in React?
4.How do we understand React-Fiber and what problems has it solved?
5. What's the difference between Component and Element
6.When will component rerender in react?
7. What will happen during re-rendering

8. Stateless Component
9. How to get the DOM element in React 16.8?
10. React Portals
11. How to avoid unnecessary re-renders in React 16.8?
12. The mechanism behind React context
13. Uncontrolled Components

Server-side rendering (SSR) is an application’s ability to convert HTML files on the server into a fully rendered HTML page for the client.

- It uses the virtual DOM instead of the real DOM.

React use batch update mechanism to update the real DOM. Hence, leading to increased performance. This means that updates to the real DOM are sent in batches, instead of sending updates for every single change in state as Frequent DOM manipulations are expensive and performance heavy.

React virtual DOM is updated with the state changes. The previous and current version of virtual DOM is compared through an efficient diff algorithm.

Uni-directional data flow gives you the control over how data flows throughout your app. The data flows in a single direction from parent to child making it much more predictablef for tracing and debugging

- It is component based and extensive.

Component based provides React with better code maintenance and growth as each component in React has their own internal logic, which is easy to manipulate.

Your event handlers will be passed instances of SyntheticEvent, a cross-browser wrapper around the browser’s native event.

However, the synthetic events objects are pooled and managed together. SyntheticEvent object will be reused and all properties will be nullified after the event handler has been called.

To stop the native broswer event from bubbling, we should use event.preventDefault()

3. Why should we use hooks in React?

4.How do we understand React-Fiber and what problems has it solved?

In previous React Engines' rendering process (V15), it will recursively compare the virtual DOM's change and update to the real DOM in one shot. This process wouldn't stop in any case. The events triggered by users such as inputting text will not be respond as browser's resources are occupied which cause lagging and drop in frame.

To improve this, Fiber now allows React to pause, resume, and restart the work on a component. It has a priority-based update system which allows the React to fine tune the renderer process.

However fiber is not equal to thread. It represents a mechanism to give up the execution rights of the CPU so that the CPU can perform other operations during this time. The rendering process can be interrupted and control can be returned to the browser, giving way to high-priority tasks such as user triggered events, and rendering can be resumed when the browser is idle.

5. What's the difference between Component and Element

(Never create a instance, React will help us do it)

6.When will component rerender in react?

React components re-render whenever there is a change in their state or props.

A simple update of the state (e.g using setState()), causes the component and all its child components to be re-rendered automatically.

7. What will happen during re-rendering

React's basic concept for processing renders is to re-render the entire application whenever there is a change. It is not saying that Virtual DOM is faster than direct manipulation of the DOM

No matter how the data changes, it will try to update the DOM with the least cost. When the DOM tree is huge, traversing the previous and current trees is still quite expensive, especially when it is just a small modification at the top level by setState() leads to traversing the entire tree by default. (We can improve this by using memo hooks)

Keys are identifiers used by React to track which elements in the list have been modified, added, or removed. During the development process, we need to ensure that the key of an element is unique among its sibling elements.

In the React Diff algorithm, React will use the Key value of the element to determine whether the element is newly created or moved, thereby reducing unnecessary element re-rendering

A stateless component has no state (:)), it means that you can’t reach this.state inside it. It also has no lifecycle so you shouldn't use those methods and hooks.

useRef returns a mutable ref object whose .current property is initialized to the passed argument (initialValue). The returned object will persist for the full lifetime of the component.

We can't visit the refs during render phase as the DOM has not been stablished. 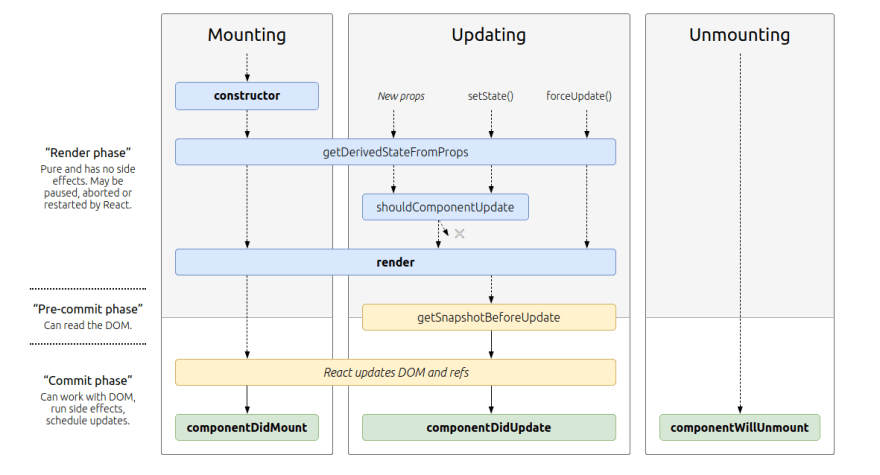 Portals provide a first-class way to render children into a DOM node that exists outside the DOM hierarchy of the parent component.

Elements need to be insert into a different location in the DOM. A typical use case for portals is when a parent component has an overflow: hidden or z-index style, but you need the child to visually “break out” of its container. For example, dialogs, hovercards, and tooltips.

React.memo is a new API comes from React 16.6. It is used to cache component rendering and avoid unnecessary updates. It is a high-level component that's very similar to PureComponent. The difference is that React.memo can only be used for functional components.

12. The mechanism behind React context