"How can our web application run without the browser? That's a good question.. Here are some useful concepts and articles i think a web developer should read regarding browsers. I know i know this is very tedious but trust me some day you will need this :)" 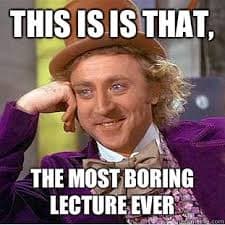 3. The mechanism behind browser cache

8. What happened when Access-Control-Allow-Origin is * (wild card)

For more information please refer to this link

What is cross-site scripting (XSS)?

Cross-site scripting (also known as XSS) is a web security vulnerability that allows an attacker to compromise the interactions that users have with a vulnerable application. It usually happens because the website does not filter malicious code, it is mixed with normal code, and the browser has no way to distinguish which scripts are trustworthy, which leads to the execution of malicious code.

How does XSS work?

Cross-site scripting works by manipulating a vulnerable web site so that it returns malicious JavaScript to users if the website does not filter the received data. When the malicious code executes inside a victim's browser, the attacker can fully compromise their interaction with the application.

Reflected XSS is the simplest variety of cross-site scripting. It arises when an application receives data in an HTTP request and includes that data within the immediate response in an unsafe way.

Here is a simple example of a reflected XSS vulnerability:

The application doesn't perform any other processing of the data, so an attacker can easily construct an attack like this:

If the user visits the URL constructed by the attacker, then the attacker's script executes in the user's browser, in the context of that user's session with the application. At that point, the script can carry out any action, and retrieve any data, to which the user has access.

DOM-based XSS (also known as DOM XSS) arises when an application contains some client-side JavaScript that processes data from an untrusted source in an unsafe way, usually by writing the data back to the DOM.

In the following example, an application uses some JavaScript to read the value from an input field and write that value to an element within the HTML:

If the attacker can control the value of the input field, they can easily construct a malicious value that causes their own script to execute:

In a typical case, the input field would be populated from part of the HTTP request, such as a URL query string parameter, allowing the attacker to deliver an attack using a malicious URL, in the same manner as reflected XSS.

Stored XSS (also known as persistent or second-order XSS) arises when an application receives data from an untrusted source and includes that data within its later HTTP responses in an unsafe way.

Here is a simple example of a stored XSS vulnerability. A message board application lets users submit messages, which are displayed to other users:

The application doesn't perform any other processing of the data, so an attacker can easily send a message that attacks other users:

How to prevent XSS attacks

Preventing cross-site scripting is trivial in some cases but can be much harder depending on the complexity of the application and the ways it handles user-controllable data.

In general, effectively preventing XSS vulnerabilities is likely to involve a combination of the following measures:

Refer to this link for more info

The key point of the CSRF attack is to impersonate the user by hijack the cookie as cookie will be carried in the same-origin request and sent to the server.

How to prevent CSRF attack

- Perform same-origin detection: The server should decide whehter the request is allowed based on the request header's origin or referer section.

- Use CSRF token: The server returns a random number Token to the user. When user sends another request, the token will be add to into the request header, and the server verifies this token.

- Set the samesite attribute in Cookie: It will not allow the cookie to be used by third parties, so as to avoid being exploited by attackers.

The attack process is as follows:

What may cause front-end security issues?

Other than the above mentioned, we should avoid abusively using iframe. The content inside iframe is provided by the third party. By default, they are not controlled. They can run scripts, Flash plug-ins, pop-up dialog boxes and anything beyond control.

2.1 The difference between thread and process 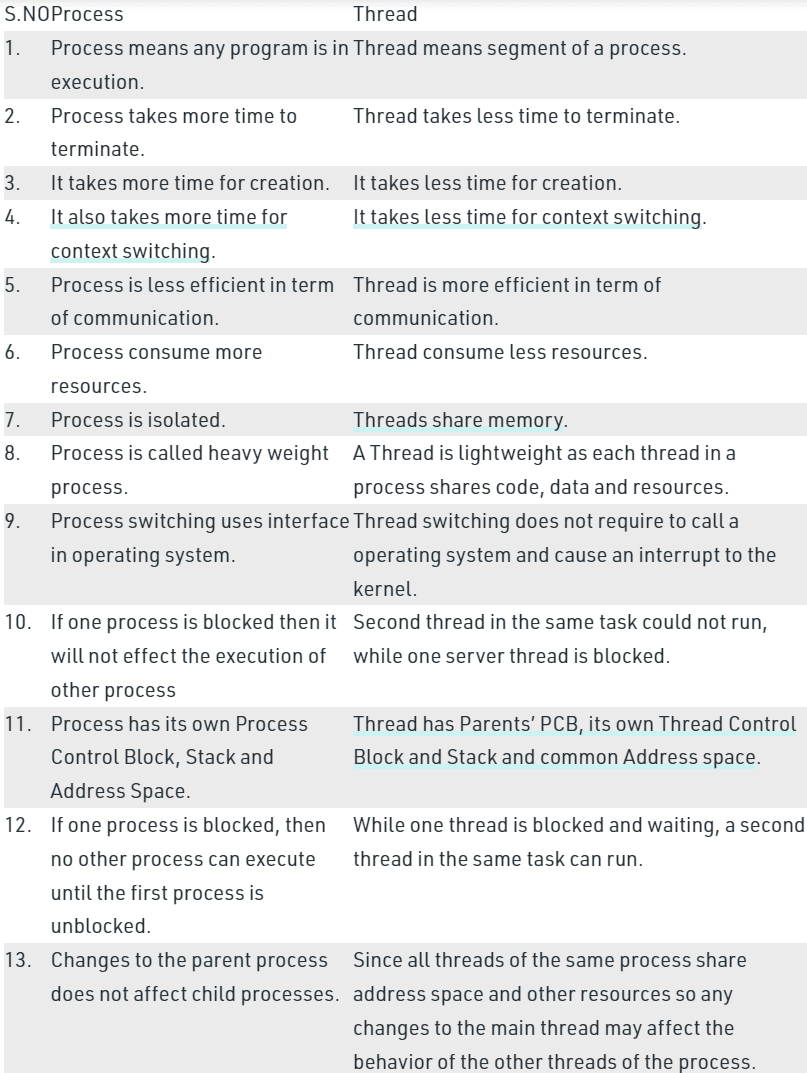 A service worker is a script that runs on a independent thread, it enable applications to control network requests as it is a programmable network proxy which decides how requests from your page are handled., cache those requests to improve performance, and provide offline access to cached content.

Act as the base for advanced features

Service workers provide the starting point for features that make web applications work like native apps. Some of these features are: 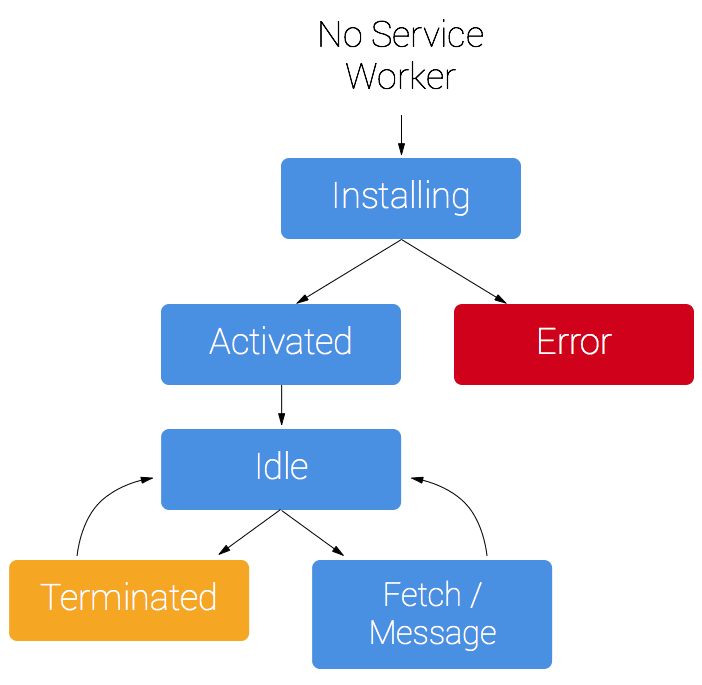 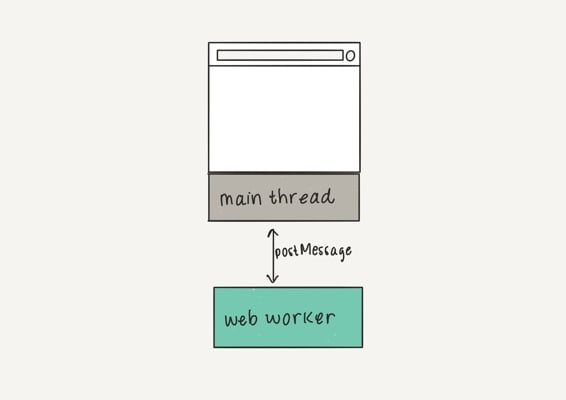 Web workers are the most general purpose type of worker. Unlike service workers and worklets as we will see below, they do not have a specific use case, other than the feature of being run separately to the main thread. As a result, web workers can be used to offload pretty much any heavy processing from the main thread.

3. The mechanism behind browser cache

The process of browser caching:

Where are cache stored?

Why do we need browser cache?

read more about it here 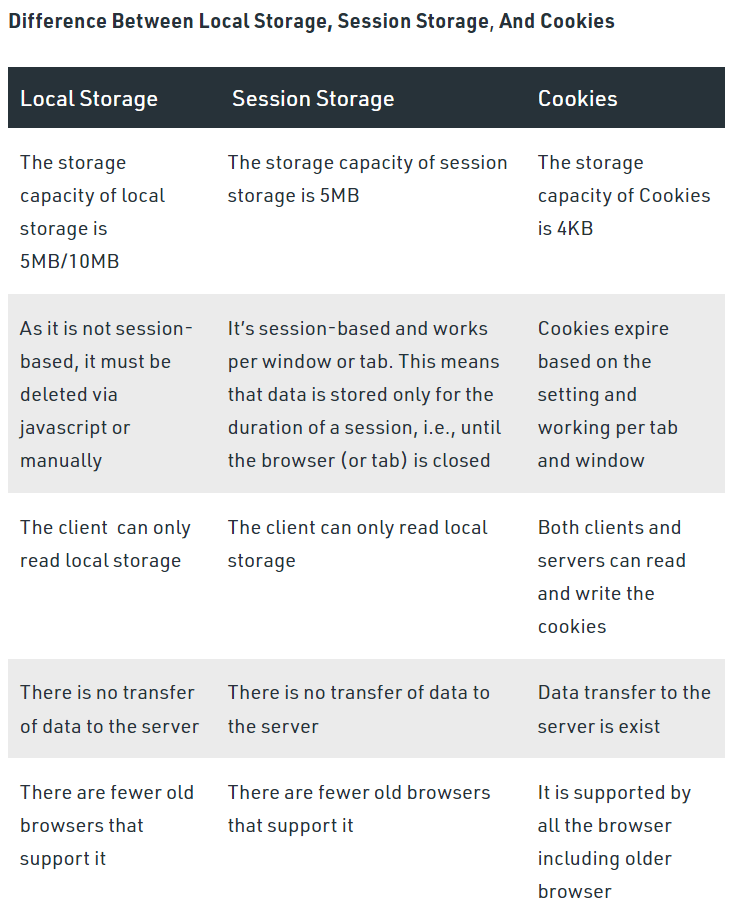 The same-origin policy is a critical security mechanism that restricts how a document or script loaded by one origin can interact with a resource from another origin.

It helps isolate potentially malicious documents, reducing possible attack vectors. For example, it prevents a malicious website on the Internet from running JS in a browser to read data from a third-party webmail service (which the user is signed into) or a company intranet (which is protected from direct access by the attacker by not having a public IP address) and relaying that data to the attacker.

V8 divides the heap into two parts: young space and old space. When you perform an operations that requires V8 to allocate memory, V8 allocates space in the first portion.

Once the objects ‘survive’ a few(two to be exact) scavenges in new space, they get promoted to old space, which gets garbage collected in a separate cycle when full.

- In the old space,
When the old space does not have enough space for object being moved from new space or the object in the space exceeds a certain limit. A mark and sweep garbage collection algorithm will be used.

In this stage, all objects in the heap are traversed, and then the live objects are marked. After the marking is completed, all unmarked objects are destroyed. This will cause some performance problems in large memory. To solve this problem, in 2011, V8 switched from the stop-the-world flag to the incremental flag. During the incremental marking, the GC breaks the marking work into smaller modules, allowing the JS application logic to execute for a while between modules, so as not to cause the application to be blocked. But in 2018, GC technology has another major breakthrough, this technology is called concurrent marking. This technology allows GC to scan and mark objects while allowing JS to run.

Token is actually a credential for accessing resources.

Generally, after the user successfully logs in through the user name and password, the server digitally signs the login credentials, and the encrypted character string is used as the token.

Store in the localStorage:
Web storage (localStorage/sessionStorage) can be accessed through the same domain provider through Javascript. This means that any JavaScript running on your website can access the web storage, so it is vulnerable to XSS attacks.

Store in Cookie
We can store it in a cookie and let it be sent automatically on every request, we can specify httponly to prevent it from being read by JavaScript or we can specify secure to ensure that the token is only transmitted under HTTPS to prevent being attacked by XSS, but the disadvantage is that it cannot cross domains and vulnerable to CSRF attacks.

Recommended Solution
Auth0 recommends storing tokens in browser memory as the most secure option. Using Web Workers to handle the transmission and storage of tokens is the best way to protect the tokens, as Web Workers run in a separate global scope than the rest of the application. Use Auth0 SPA SDK whose default storage option is in-memory storage leveraging Web Workers.

8. What happened when Access-Control-Allow-Origin is * (wild card)

When Access-Control-Allow-Origin is *. The client side will not be able to carry the cookies in request even setting XMLHttpRequest's withCredentials: true.

Therefore, for the client to carry cookies to the server, three conditions are required:

The other Tabs which listen to the event will receive it, as shown below.

The Broadcast Channel API allows communication between Tabs, Windows, Frames, Iframes, and Web Workers. One Tab can create and post to a channel as follows.

And other Tabs can listen to channel as follows.

Using Service Workers, you can send a message like shown below.

And in the receiving Worker in the other Browser Tab can listen to the event.

This method gives more control and is a reliable way of passing messages.

One of the traditional ways of communicating across Browser Tabs, Popups, and Iframes is Window.postMessage() method. You can send the message as follows.

And the target window can listen to the events, as shown below.

One advantage of this method over the others is the support for cross-origin communication is possible.

When we want to communicate between two tabs from different origin, we can use iframe as a bridge, post message to the iframe and listen to the message received from iframe.

How to Get Path to File in macOS Finder

Javascript, the duct tape that holds the frontend together