As I continue to build out waylonwalker.com I sometimes run into some errors that are not caught because I do not have good testing implemented. I want to explore some integration testing options using GitHub's actions.

Running integration tests will not prevent bugs from happening completely, but it will allow me to quickly spot them and rollback.

🤔 What to test first?

The very first thing that comes to my mind is anything that is loaded or ran client-side. Two things quickly came to mind here. I run gatsby so most of my content is statically rendered, and it yells at me if something isn't as expected. For performance reasons I lazy load cards on my blogroll, loading all of the header images gets heavy and kills lighthouse (if anyone actually cares). I am also loading some information from the top open-source libraries that I have created. To prevent the need to rebuild the whole site to get the latest information I am just using the GitHub API client-side.

things I was looking for from features to test

features on my blog to consider testing

I chose to start with the GitHub repos as they seemed a bit more straight forward, and it's been a while since I have done any selenium. 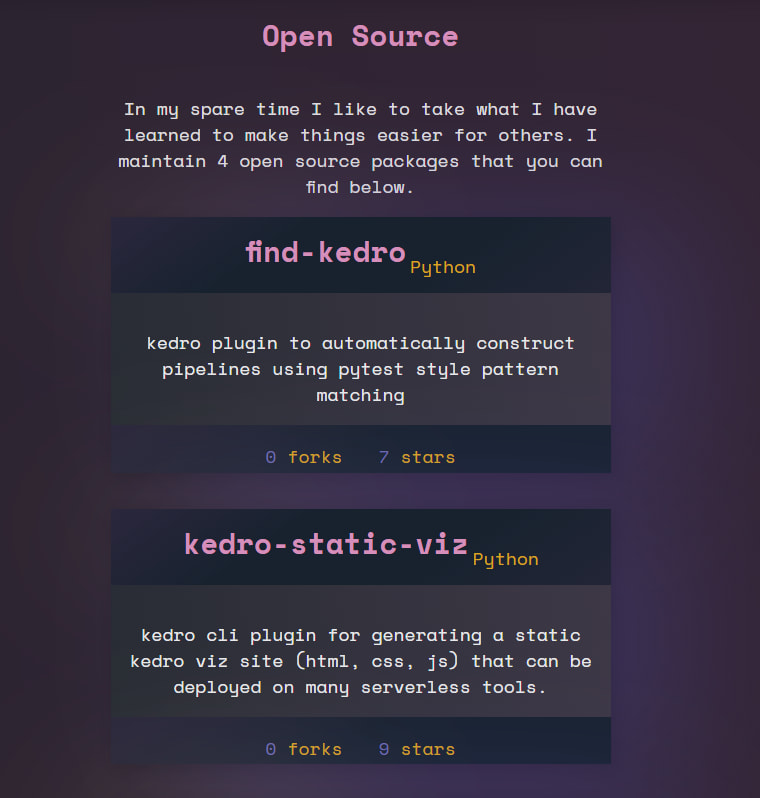 here is what the GitHub repo cards look like

I am trying out TestProject.io for the first time on this project. My experience so far has been top-notch. There was an existing suite of docker images/files set up to run the TestProject agent in a docker container alongside headless chrome and firefox drivers. The first thing that you are going to need is a TP_DEV_TOKEN and TP_API_KEY. These will give TestProject access to your account so that it can automatically post results to your dashboard

Put these in secrets in your repo

In your GitHub repo go to settings>Secrets, or append settings/secrets to the URL to your repo, and add the tokens. This will give GitHub safe access to them without them being available to the public, contributors, log files, or anything.

To expedite development I went ahead and set up development environment that I could log into on Digital Ocean. This allowed me to get all of my tests working a bit quicker than just running them through GitHub, but being as similar as possible. This allowed me to learn the ins and outs of setting up TestProject without needing to do a full install every time through Github's actions.

I am not going to go into full dev machine setup here, but you can read my setup notes.

I chose to go down the route of using pytest. I really liked the idea of utilizing fixtures, automatically running my test functions, and utilizing a bit of the pytest reporting capabilities.

You can see the conftest.py live on GitHub.

pytest automatically imports conftest.py modules from the same directory that you are working from. It's common to place fixtures used across multiple files here. I placed a driver fixture in this module so that as I create more tests it will be available everywhere by default.

conftest.py stores fixtures for all modules in a directory.

Look at the full version of conftest.py

The above sample is a bit simplified. I ran into some inconsistencies in the real version and found that some tests had a better pass rate if I added a wait. I ended up with a driver and a slow_driver fixture.

see the full testrepos.py on GitHub

I have initially set up 3 different tests for the repo cards. I set a list of repos that I expect to show up in the cards. These tests are quite easy to do with TestProject.io as it is using selenium and a headless browser to execute javascript under the hood.

If you are not familiar a headless browser runs the engine as your browser without a graphical user interface. JavaScript gets fully loaded and parsed, and the dom is completely interactive programmatically.

Before jumping into the real action. I quickly wanted to mention the amazing ✨ discord server that they have going.

I was a bit confused about how to set up TestProject.io inside of actions. I was with a prompt response linking me to the exact example I needed. The tests were written in java, but they had set up the docker-compose steps that I needed.

GitHub actions are a continuous integration, continuous delivery service by GitHub that will spin up a VM and run a set of steps upon a number of triggers including push, pull request, and schedule.

If you're new to actions check out this article on using actions.

Now that I have my GitHub repo setup with my tests successfully running in pytest, let's get it running inside of GitHub actions automatically.

You can see in the section above I have set up to run every time there is a push to or pull request open to main. I also set a fairly aggressive test schedule to run every 10 minutes. For now, this is just to build confidence in the tests and get more data in the reports to explore. I will likely turn this down later.

In the test job you can see that we have rendered the TP_API_KEY into the docker-compose.yml using envsubst file so that TestProject has access to it. We have also exposed our TP_DEV_TOKEN to pytest.

The following docker-compose.yml file was graciously contributed by @vitalybu in the testproject-io/java-sdk repo. It sets up a template with the TP_API_KEY as a variable for envsubst, headless browsers for chrome and firefox, and the TestProject.io agent.

⌚ Waiting for the Agent to register

I think the most interesting part of the workflow above is how we wait for the agent to register. The shell script is a bit terse, but it looks for exceeding the max_attempts allowed or that the agent has started by using its /api/status rest API. This prevents us from wasting too much time by setting a big wait, or trying to move on too early and running pytest without a running agent.

One one of the coolest features that you get from TestProject.io are the reports dashboard. To me, this felt like a premium feature for free. Here you can see a time-series plot of your tests success rate over time. It gives you a bit of an ability to slice in, but not a lot. Some of the filters are pre-canned, like the past 2 days are past 30 days cannot be customized.

A single test flow in the dashboard

As you drill in you can see individual tests that have been run, select them, and see individual reports for each test. Personally I really like the layout on the side. It converts the steps ran by the driver into a human-readable flowchart, and each step can be opened up to see their values. It would be nice if it picked up my pytest assertions, but picking up what it did was great.

The experience I had setting up TestProject.io to run inside GitHub's actions was great. It was fairly simple to set up and get running with many of the greatest integration testing tools of today, selenium, chrome, firefox.

Now I am going to turn the test frequency down a bit.

If you're new to actions check out this article on using actions.

How To Fill Out A Form With Your Voice