Nodes are the data while the edges are the connections between nodes.

Neighbor nodes are nodes accessible through an edge.

In undirected graphs, the edges between nodes are bidirectional.

Adjacency lists are useful in representing graphs in code.
The lists are similar to dictionaries with a key-value pair where the key is a node and the values are the neighbor nodes.

The image below demonstrates how we can represent an adjacency list as a graph. 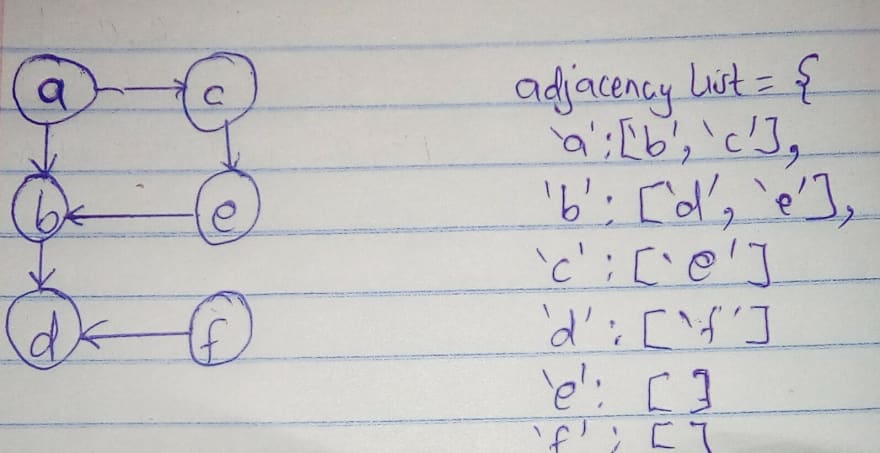 Given edges, we can create an adjacency list as follows.

Every pair in the edges list represents a connection between nodes, therefore in the adjacency list we include both elements as keys with each other as values.

We update the adjacency list based on the edges provided.
We can use the function below to create an adjacency list given edges in an undirected graph.

In this post we will go through two main concepts that are central to solving graph interview questions.

In this approach we follow a node as far as we can before moving to the other neighbor. We explore the nodes following the edges as far as possible before changing directions.

We can achieve depth-first traversal using iteration or recursion.
It uses the stack data structure which follows the Last In First Out(LIFO) principle

Iterative approach to print all nodes.

We remove from the end and append to the end thus last in is first out.

In this approach we explore all the immediate neighbors of a given node and keep following this process.

Breadth-first traversal explores all the sides evenly without following one direction entirely. It can be achieved through iteration.
It uses the queue data structure which follows the First In First Out(FIFO) principle.

We remove from the beginning by specifying 0 index and append to the end thus first in is first out.

With this knowledge we are equipped to handle graph interview questions as we will see in future posts.

Number of Connected Components in an Undirected Graph

Once suspended, wanguiwaweru will not be able to comment or publish posts until their suspension is removed.

Once unsuspended, wanguiwaweru will be able to comment and publish posts again.

Once unpublished, all posts by wanguiwaweru will become hidden and only accessible to themselves.

If wanguiwaweru is not suspended, they can still re-publish their posts from their dashboard.

Once unpublished, this post will become invisible to the public and only accessible to Bernice Waweru.

Thanks for keeping DEV Community 👩‍💻👨‍💻 safe. Here is what you can do to flag wanguiwaweru:

Unflagging wanguiwaweru will restore default visibility to their posts.