I am currently in my tenth year as a Disney Technology Cast Member. As the tenth year is a milestone year at the company, I have spent some time reflecting on my time here, my career, and where I want to go over the next decade. My conclusion is that I cannot imagine working anywhere else. This post describes some of my reasons why.

Technically, I do not work for Walt Disney World, though that is the easiest way to explain it to people. In fact, I am employed by Disney Parks, Experiences, and Products Technology and Digital. That is much harder to say, so I tell people I work at Walt Disney World, which is close enough.

The reason this is important is because Disney is a very large company. I have only ever worked in the “Parks and Resorts” segment. My experience may be different than those who work for Disney Studios, ESPN, ABC, Pixar, Marvel, etc.

Lastly, a disclaimer. I am speaking only for myself and not as a representative of The Walt Disney Company. These opinions are purely my own.

Working for Disney provides an abundance of “non-career” benefits that most other companies simply cannot match.

What do I mean by non-career benefits? Essentially, these are advantages and perks of working for Disney that have absolutely nothing to do with your day-to-day job activities. They are simply extras and there are a lot of them.

In fact, it is hard to decide where to begin. Often it seems that there are more of these types of benefits than is possible to enjoy in any given year. At one point, I participated in so many that my children asked me at dinner one night, “What do you do at Disney again?”

I will describe some of my personal favorite non-career benefits below. By no means is this en exhaustive list.

One of the first questions I get when someone hears where I work is whether I get free park admission. The answer to that is “mostly.” Every Disney Cast Member gets a pass permitting nearly unlimited self-access to most of the Disney theme parks throughout the world. I say “nearly unlimited” because the passes are subject to being “blocked out” during certain peak periods. For all intents and purposes, the Cast Member can get into just about any park on almost any day of the year.

Additionally, most Cast Members receive Guest Passes that they can use to admit other guests, such as friends and family members. The use of these passes is regulated — you must be with your guests at all times, and the number of uses per year depends on the Cast Member’s job and/or years of service.

About twice per year, usually around the Christmas and Easter holidays, the Walt Disney World theme park leadership will send out a call for volunteers to be “Cross Utilized” in a role other than their primary one. This is known as a Cross-U. We are encouraged to sign up for a shift inside a theme park to help with the additional work that comes with higher Guest attendance.

I look forward to signing up every year because I never know who I will meet or what kinds of jobs I will do. Here are a few of them:

A few years ago, during the week between Christmas and New Year’s Day, one of my colleagues and I racked up a total of 17 shifts between us (he bested me by one). 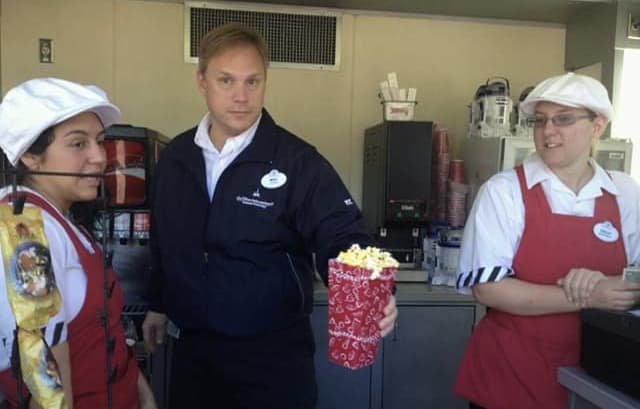 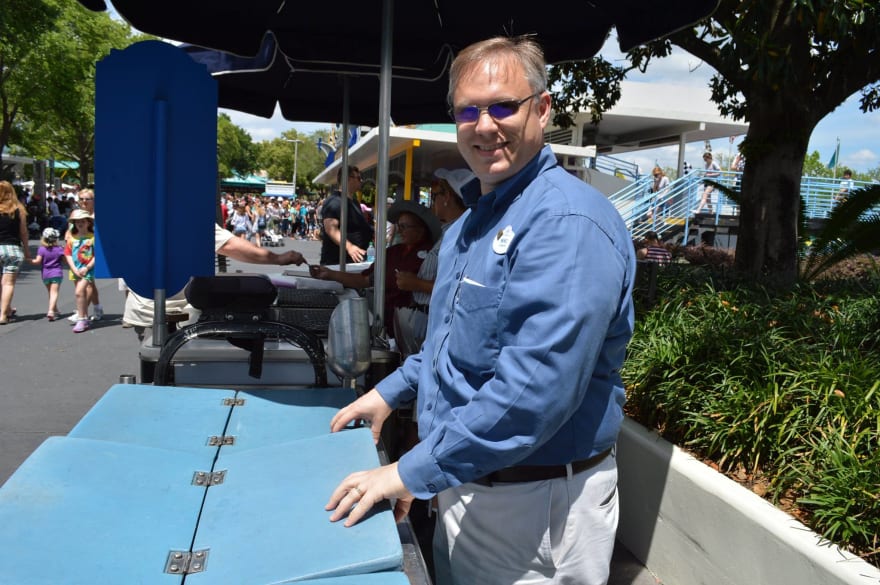 Before any major opening, the company will invite a group of local, national, and sometimes global media to experience the attraction, resort, or land ahead of time. During such events, volunteers are needed to assist with such a large undertaking. The work required typically involves helping members of the press get from their resorts to their interviews and other activities on time. I have enjoyed the opportunity to be involved with many such events, and look forward to them when they occur.

I have had the good fortune of working with reporters in print, radio, and television media from nearby markets like Orlando and Tampa, and as far away as England and The Netherlands.

During the dedication event for Star Wars: Galaxy’s Edge at Disney’s Hollywood Studios, I was helping the station’s cameraman with his tripod and got stuck behind him as the event started. I kept out of the way, but did manage to get some decent pictures of the dedication. 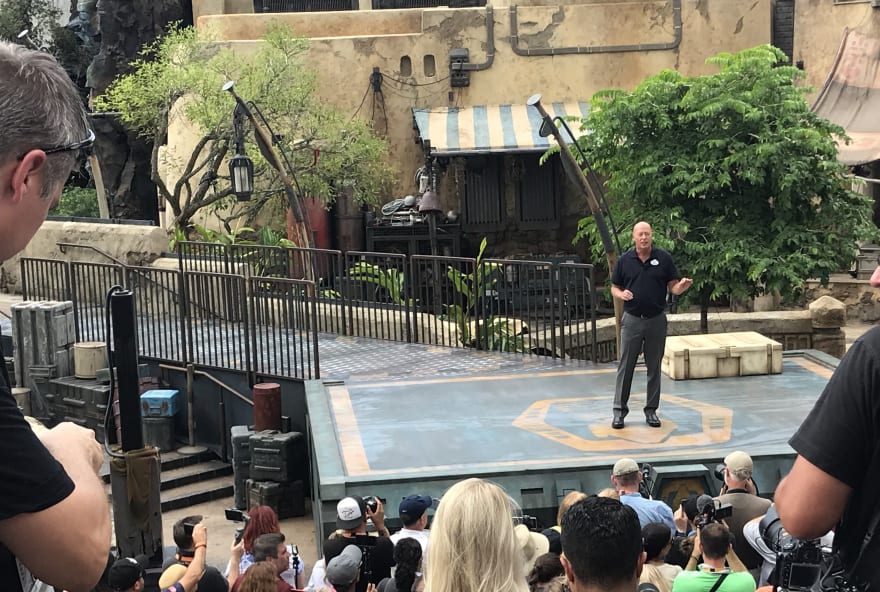 Disney knows how to make its employees feel special. One of the best evidences of this is the fact that we are referred to as Cast Members, rather than simply “employees.” I have always appreciated the idea that all of us are part of a vast show. Each Cast Member has a role to play in helping to create magic for our Guests.

Another important aspect of making us feel special is in the way Disney creates special events and activities. Sometimes these events are just for fun, but often they serve a necessary business function, as I will explain below.

Prior to a major opening, Disney will often allow current Cast Members to experience the attraction for a day or so before it opens to the general public. This allows those Cast Members working the attraction to get a realistic idea of how things will work when Guests arrive. It also provides a bit of extra magic for those Cast who do not work at the new attractions.

As the Walt Disney World Resort prepares to open after a months-long closure due to COVID-19, Cast Members were able to sign up to help test the new safety measures that have been put into place, a few days before the parks officially reopen.

A few years ago, before the introduction of the Magic Band, it was important to make sure they could be used consistently to unlock the doors at all of our resort hotels. To make testing easier, Cast Members were asked to sign up to help. Those selected would experience a free overnight stay in a random resort hotel room for one night. As it happened, I was selected for a night at Disney’s Grand Floridian Resort and Spa. The date of the test just happened to be my 20th wedding anniversary.

Another feature of Magic Bands is that they can be used to correlate a photo taken on an attraction to a Guest’s “My Disney Experience” profile. This, too, needed to be tested. Again, Disney turned to its Cast for a night of fun and excitement. I signed up for one such event. We met at Disney’s Hollywood Studios after the park closed and were told to ride Tower of Terror as many times as we could in an hour. Then we were sent down the hill to do the same thing at the Rock and Roller Coaster. When finished, we were each shown the pictures taken of us on the ride to make sure the photos were of the right people.

A few weeks before the opening of Satu’li Canteen in Pandora — The World of Avatar, a coworker was hard at work on delivering the resort’s first Mobile Quick Serve Order experience. To help test it, he invited a few of us to visit the new land for lunch. Upon arrival, we were led backstage and entered an area just outside the restaurant. Construction on Pandora was still going strong and we were cautioned to stay out of the work zones.

Each of us was provided with an iPhone preloaded with a new version of the My Disney Experience app. We were asked to order anything we wanted, and then to proceed to the counter when the app told us the order was ready.

There were dozens of people in the test, all ordering at the same time. The test went flawlessly, and the food was amazing.

I have also been able to take advantage of multiple backstage tours of various attractions: The Haunted Mansion; Lights, Motors, Action: Extreme Stunt Show, and Fantasmic, to name a few. For those who do not mind seeing exactly how the magic is created, these are unique opportunities that do not come around often.

As you may guess, not all of these experiences are available to everyone. I consider myself blessed to be able to take advantage of these opportunities. Other Cast Members in other organizations will have different opportunities, but I have no doubt they are just as magical.

Of course, working at Disney is not all fun and games. There are just as many career-related benefits to working here. I will detail some of those in the next post.

Do you have a markdown resume?