Many years ago I was on a business trip, and found myself in a particularly crowded terminal at the Hartsfield-Jackson Atlanta International Airport. Thunderstorms up and down the east coast had jammed air traffic all along the eastern seaboard. Most flights were delayed, and many were canceled. As you can imagine, people were not in the best of moods. For me, it turned into a lesson on kindness and humanity. 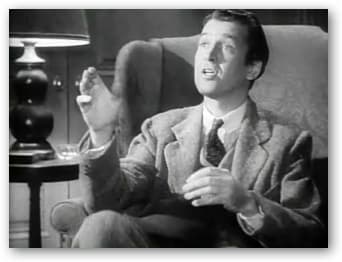 In this world, you must be oh so smart, or oh so pleasant. Well, for years I was smart. I recommend pleasant. You may quote me.
-Elwood P. Dowd, Harvey, 1950

I had just arrived from Texas to catch a connecting flight to New Hampshire. The first leg was uneventful, but also uncomfortable. My back ached and I needed to find a some painkillers before the next flight. I knew things were bad as soon as I got to the gate, and saw the hordes of unhappy travellers.

The line to speak to the gate agent was longer than I'd seen in quite some time, but I entered it anyway. The gate was some distance from the airport's many shops, and I wanted to make sure that I had enough time to find some aspirin or something before we boarded.

As I often do while waiting in line, I paid close attention to the people in front of me, seeing how they interacted with the gate agent, and vice versa. It's good to be aware of someone's demeanor before talking to them. What I saw was not promising. Everyone ahead of me seemed to get more and more belligerent, causing the gate agent to become more and more flustered.

The "gentleman" just ahead of me was the worst. He berated the poor gate agent, a young woman I judged to be in her early 20s. He made plenty of unreasonable demands of her, as if there were anything she could personally do about the storms or the flights. She was calm and patient, and showed amazing poise against someone who was apparently trying to be as intimidating as possible. As she calmly explained that there was nothing more she could do for him, he got angrier. Finally, he walked away, muttering something about never flying that airline again. I inwardly shrugged, thinking the airline would be better off without him.

Finally, it was my turn, or so I thought. Another man approached the gate agent from behind the desk, and I quickly realized that he was her supervisor. She asked me to give her a moment while the two of them chatted, and I nodded my understanding. While not trying to listen to their conversation, they did nothing to prevent it. She calmly explained to him that she had been standing at the desk by herself for more than six hours without a break, dealing with countless numbers of upset passengers. She hadn't eaten since breakfast (it was dark by now), and her replacement was late. Her supervisor seemed to empathize with her plight, though I noticed he didn't offer to help personally. He said that he would go look for someone to relieve her, asked her to stay at her post a little while longer, and then walked away.

Finally, the young gate agent turned to me, attempted a smile, took a deep breath, and asked how she could help me. I smiled back and said, "well, I came up here hoping to get a flight update, but I think I already know the answer." She smiled a little brighter and agreed that she didn't have good news.

I told her that I overheard her conversation with her supervisor, and that I may be able to do something for her. I had come to the desk simply to ask about the flight and the best place to get something for my lower back pain, but her plight seemed worse than mine. I retrieved a bag of mixed nuts from my prior flight and offered them to her. I said, "it isn't much, but the protein might help until you can get a real meal." Then I said to her, "I'm travelling alone and didn't check any bags. If my seat on this flight can help a family get home tonight, let them have it." She said they weren't looking for anyone at this point, but took my name (and the bag of mixed nuts), thanked me, and then took the next aggravated customer. I walked away to find the painkillers, glad to have a been a tiny bright spot in someone else's bad day.

Not long after, I heard my name over the gate loudspeaker system. "Would passenger Michael Callaghan come to the desk, please?" When I arrived, I was met by the same gate agent, who seemed to be in a much better mood. She asked me if I would still be willing to give up my seat on the flight, even if it meant not getting home until tomorrow. I asked for details, which ended up being:

I called home and told my family I would see them around lunchtime tomorrow. I took a shuttle to the hotel, which was only a few minutes away. I enjoyed a relaxing meal, a good night sleep, free breakfast, and an extremely comfortable flight the next morning. The storm had moved out to sea, and the trip could not have been better.

Unlike the angry guy in front of me, I continue to fly on this particular airline as often as I can. I sometimes wonder what he got for yelling at the gate agent. I think I know the answer.

If the message you took from this post is, "try to bribe gate agents to get flight upgrades," I respectfully suggest that you missed the point. Please read it again. Though that was the outcome in this case, it isn't always.

A more accurate message is that you won't get very far treating others badly. Treat people with politeness, courtesy, and kindness. Regardless of the outcome of any particular interaction, the effects will accumulate over time. You will feel better about yourself, kindness and courtesy will become a habit, and you will become a person others want to be around. And one day, when you need help, you may find yourself accepting someone else's kindness to get you through a difficulty of your own.

At my current day job, we value courtesy to our guests and employees over everything but safety. Though this incident occurred many years before this job, I like to think back on it when pondering how my actions and attitudes affect those around me. Sometimes I forget, and this story is a reminder to myself to elevate my interactions with people, especially when having a bad day.