three.js is a powerful JavaScript library and API allowing developers to create incredible 2D and 3D graphics that are animated in the browser without plugins (using WebGL).

To check out some of the amazing projects created by talented developers, you can check them out at the three.js homepage, as well as many advanced guides on getting the most out of the library.

What are we building?

In the header above (after clicking ‘Run Pen’), you can see a live demo of the animation we will be building in this tutorial. It is a cube that spins slowly, with four small spheres orbiting it at a much faster pace, each on its own orbital path. It is also brightly coloured because monochrome is drab.

Users also have the ability to spin the cube and spheres in any direction they want!

Before we start, lets get our project setup first. Create a project directory somewhere that is easy to reach with your terminal. The way I’ve structured my directory looks like this (important so the import paths work properly):

Type the following commands in your terminal to get your project directory setup correctly (don’t forget to press the ‘Enter’ key between each line): 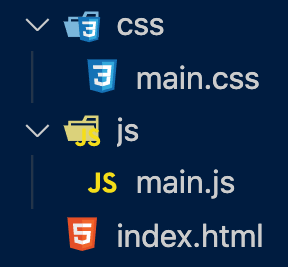 You can setup your HTML and CSS any way you prefer, or you can use the following code as templates to work from:

Alternatively, if you are using yarn, enter:

(If neither of these commands work or make sense to you, you will probably need to download npm or yarn here).

Only one step left to finalise before creating our first scene. Head to your favourite code editor and open up the main.js file. At the top of the file, you will want to write the following two lines of code:

These two import statements above give our main.jss file access to the:

Everything is now set up and ready to go for our first lines of three.js code! Every animation (or ‘scene’) we create needs three crucial objects:

The code for these three objects looks like this:

Now let’s take a deeper dive into these three lines of code so we can understand what is going on under the hood: 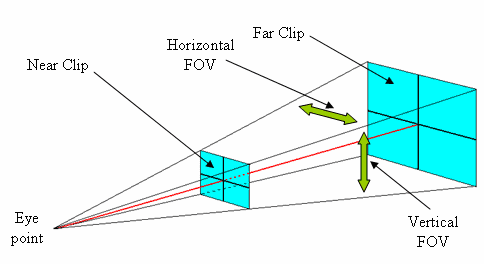 In our case, we have changed the antialias property from false to true. See diagram (left) for an example of what our scene will look like with or without anti aliasing

The last three lines of code we need for the initial scene creation are:

A note on responsive design:

When creating web applications it is important to develop for all devices, from smartphones to tablets and 4K desktop monitors. This is already taken care of for us by the .setSize() function for the native screen size of the device.

What if the user changes the size of their window on a desktop or laptop? 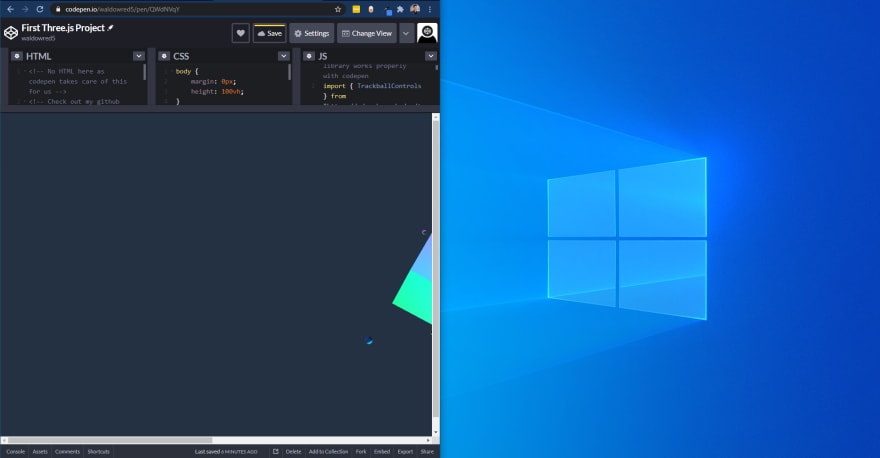 Our cube gets cut off when the window size changes

Our render will be stuck in the center of the screen and become covered, instead of matching the new size of the window. To solve this problem, we need to add an event listener to the window for ‘resizing’ so that we can recalculate the window size for our canvas if a user changes the size of their window.

We can get around this problem with the following code:

Here, we change the size of the canvas back to the size of the window, as well as resetting the aspect ratio to match. Finally we call the .updateProjectionMatrix() function to apply the new changes.

With all of the code we have added so far, you should have something like this:

We now have our environment completely set up, including a scene, a camera and a renderer to draw everything for us. Don’t panic if you can’t see anything, we haven’t built anything to be rendered yet.

To see how we go about building the rest of the animation, head over to the second part of this tutorial. See you there! 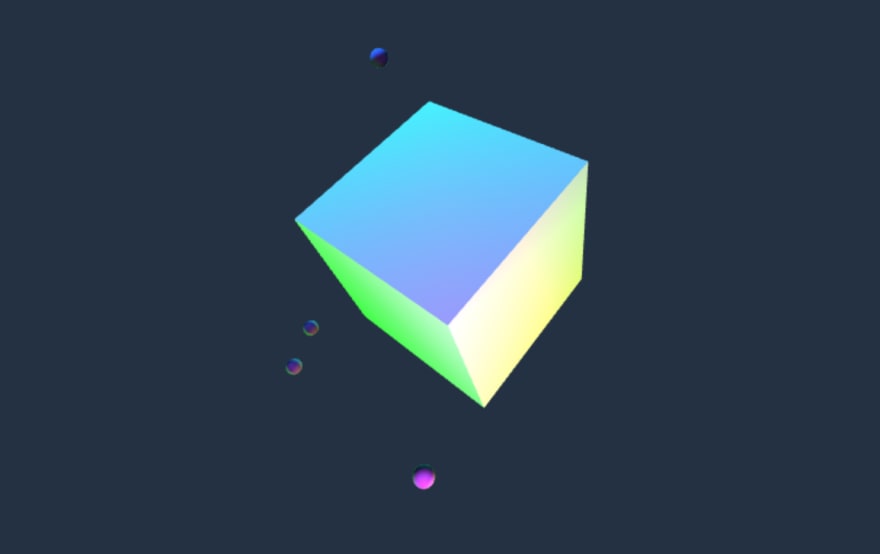 We will be building these objects very soon!

Once suspended, waldowred5 will not be able to comment or publish posts until their suspension is removed.

Once unsuspended, waldowred5 will be able to comment and publish posts again.

Once unpublished, all posts by waldowred5 will become hidden and only accessible to themselves.

If waldowred5 is not suspended, they can still re-publish their posts from their dashboard.

Once unpublished, this post will become invisible to the public and only accessible to waldowred5.

Thanks for keeping DEV Community 👩‍💻👨‍💻 safe. Here is what you can do to flag waldowred5:

Unflagging waldowred5 will restore default visibility to their posts.