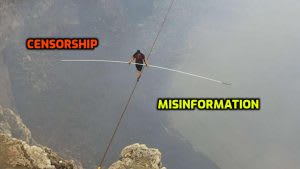 The post Your Parent’s Internet – Solving the Misinformation Problem appeared first on Qvault.

The age of information is not what we all hoped it would be. We successfully digitized the majority of human knowledge, and we even made it freely accessible to most. Now the problem is different, we have too much information. Answers to most questions can be found in thousands of distinct places online, and the new problem is “whos information can we trust?”

What Platforms Think They Should Do About Fake News

Twitter and Facebook have recently been under scrutiny for their censorship of coronavirus related misinformation. For example, a video claiming Hydroxychloroquine is a Corona cure recently went viral on Facebook, and the video keeps getting taken down. The video contains some wild assertions, made by Stella Immanuel, who also believes that gynecological problems are the result of spiritual relationships.

By removing content they believe to be dubious, Twitter and Facebook have made themselves arbiters of truth. Anecdotally, all the posts I’ve seen them remove HAVE contained misinformation, but the fact remains… these platforms have become self-appointed authorities on the veracity of our information.

This is a problem.

So We Can’t Censor?

We certainly can, and we certainly should in some cases. Let’s get some obvious ones out of the way:

There may be some other clear examples where censoring is unquestionably the right choice, though I doubt there are many. Let’s look at some more controversial examples:

That said, I certainly want an online system where hate speech and misinformation are effectively filtered out of the conversation. Ideally, every online participant is a virtuous, educated, and concerned conversationalist. If this were the case, posts of an undesirable nature would effectively be ignored due to not receiving the likes, shares, upvotes, and comments they need to spread.

In reality, we can’t have such a pacifistic approach. We need to protect our gardens.

Misinformation – What Should Platforms Do?

It starts here. All online platforms are responsible for the tools they provide for moderation, if not for the moderation itself.

By removing misleading content, platforms run the risk of fueling an argumentum ad martyrdom mentality. Removing information can have an adverse effect, causing people to suspect we have a nefarious reason for removing it.

What Should Users Do About Misinformation and Fake News?

The post Your Parent’s Internet – Solving the Misinformation Problem appeared first on Qvault.

The pillars of DevOps. What is a DevOps engineer?